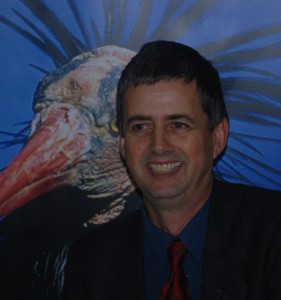 Chris Bowden is RSPB’s Globally Threatened Species Officer, and Programme Manager of the consortium of ‘SAVE’ partners – Saving Asia’s Vultures from Extinction. Chris has worked for RSPB on various threatened species, (after his Woodlark and Nightjar research days on Thetford Forest), notably the Northern Bald Ibis based in Morocco (for which he still has responsibilities), but also a number of others which have taken him for extended periods to Cameroon (for BirdLife International), and Montserrat in the Caribbean. Vultures have been his main focus since 2004 however, and he now also co-chairs the IUCN Vulture Specialist Group.

When Mark (RSPB Director of Conservation at the time) called me in to his office in March 2004, following the discovery that diclofenac was the main cause of the unprecedented Asian vulture declines, to ask me (well effectively tell me!) that I was needed to oversee RSPB’s support for saving at least three species of vultures from extinction, I was both flattered but pretty daunted by the prospect. Over eleven years later, and now based out here in Bangalore, I’m happy to respond to the invitation for an update on where things stand. From the bleak outlook and extinction trajectories of 40% population declines PER YEAR back then, we are definitely making some progress, although we’re certainly not there yet…

Following the extraordinary and catastrophic declines over just 15 years, including losing over 99.9% of what was thought to be the most abundant large raptor in the world, the Oriental White-backed (or White-rumped) Vulture, two main priorities were set in 2004 (for this and the two other resident Gyps vulture species): one was the complete removal of diclofenac from the environment, and the other was to establish a viable conservation breeding population of the three Critically Endangered Gyps species. Both needed quick and determined action, which on the scale required, was only going to be possible through working with a network of dedicated partners. Once we had identified at least one safe and viable alternative drug (meloxicam) in 2005, achieving the Indian Government ban of veterinary diclofenac formulations in 2006 was still by all accounts (including in ‘Science’) a very swift and momentous achievement. Meanwhile, the breeding programme forged ahead in establishing a sufficient founder captive population, but doing this for species that had never previously bred in captivity, and the fact that they only become sexually mature at five years (and most were brought as nestlings or juveniles), took both time and determination by BNHS in India amid major scepticism all round. And because of the need to act fast, RSPB (with Darwin Initiative help) had to bear the brunt of the costs, and unfortunately this continues to be largely the case – although we believe we may well have some recent progress on this.

Meanwhile, the veterinary diclofenac ban has had a very significant impact, and by 2011 we were delighted to be able to say that the declines had significantly slowed, and that this trend directly reflects the levels of diclofenac being used to treat cattle. However, we still get vultures (even in their dramatically reduced numbers) dying of diclofenac poisoning and worse still, we now have evidence that other vulture species and even Steppe Eagles are also susceptible to such poisoning from the same drug. Because the 2006 ban has effectively removed veterinary formulations from the system completely, the source could only now be human formulations (which are effectively identical) and sad to say that the pharmaceutical companies (more than 60 in India alone) had meanwhile stepped up production of their large “multidose” vials of these human formulations, which despite the microscopic labelling “not for veterinary use” that we had successfully proposed, was clearly making the illegal use of diclofenac all too cheap and easy for unscrupulous veterinary practioners. So we’re optimistic that the ban announced last month of these large vials will have significant impact in further reducing diclofenac use and thereby save the lives of huge numbers of vultures.

Just when this seems like diclofenac might at last be on the way out, it has emerged that at least some of the other veterinary drugs that are replacing diclofenac in veterinary use are also toxic to vultures – even if not necessarily toxic at quite such low concentrations as diclofenac, but they certainly have the power to kill vultures. The Indian Government has agreed to a safety-testing protocol for vultures for some of these other drugs, (incidentally, we already have strong evidence for at least three of these being unsafe – ketoprofen, nimesulide and aceclofenac) but the funding for this testing has now hit a problem (which is being blamed on the financial cuts of the new Government, which admittedly have been serious) so this may now need some CSR support from industry… Hopefully this will happen before some of these other drugs gain popularity with the veterinarians, and we’ll reach the stage where licensing of drugs will only be granted once this testing has been done. That could take a while though!

Back to a more positive theme, the conservation breeding programme has gone from strength to strength, in no small way due to the efforts and determination of Vibhu Prakash and his BNHS team. Each year, the breeding productivity has increased significantly, and Jemima Parry-Jones deserves a special mention for her role in that process. Since the first fledging in 2008, we have already fledged over 180 birds and this includes a good proportion of all three species – figures will be announced for this year very shortly along with all other updates on www.save-vultures.org. Developing artificial incubation methodology and more recently using this to induce ‘double-clutching’, and thereby doubling the productivity of breeding pairs – by removing the first egg (they only lay one normally), they then lay a second egg three weeks later, and we now routinely put the first chick back with its parents and hand-rear the second, together with others so preventing any human-imprinting concerns. We also have second generation offspring from one of the 2008 chicks named ‘Phoenix’. Genetics of the captive population has also been looked at and shows good genetic diversity for all three species in the Indian programme. There are additional breeding facilities with smaller numbers in both Nepal and Pakistan, and it is WWF Pakistan with support from The Hawk Conservancy that led the main vulture initiatives in Pakistan.

So producing birds in captivity is going well, and the exciting upcoming phase is the start of releases back to the wild. Surveying the safety in areas large enough (100km radius is our projection from what we know of movements) to support the released birds is a key element, and involving state governments who are now taking up the responsibility here is essential. Although we are not quite at the point of finalising where the first such releases will occur, there is a lot of activity and background work going on as this huge step becomes reality. The preparations for release are being planned in great detail, with each step being carefully evaluated.

In-situ initiatives that we’ve labelled ‘Vulture Safe Zones’ have been started over the past four years, with some support from SOS. These carefully focus awareness work on the key targets of the relevant Government officials and departments, vets, pharmacies and all the related players, using dedicated teams on a similar scale to our plans for the release areas. It is hoped that these areas will either become vulture release areas one day or at least that they succeed in securing their remnant vulture populations. The releases themselves will be central to checking just how safe the environment really is, by using tagged vultures whose movements and fate will be carefully monitored. But these will only go ahead once we already have confidence that diclofenac is further reduced within the areas concerned. One encouraging thing is that the Vulture Safe Zone model is being picked up and replicated by a number of local NGOs across the region, having originated as a concept in Nepal through the work of Bird Conservation Nepal, where the progress in removing diclofenac is looking particularly encouraging.

The efforts described so far have been spearheaded by a relatively small number of organisations in South Asia, but it was recognised that these scientifically oriented projects needed a clearer identity and an umbrella under which they could come together and speak with a united voice. With this in mind, in February 2011, the consortium of partners ‘Saving Asia’s Vultures from Extinction’ (SAVE) was launched, both in India and Nepal, and now has fourteen full members signed up from the five key range countries – Bangladesh, Cambodia, India, Nepal and Pakistan. These are mainly NGOs but also include two Government bodies and in recent times, the Bangladesh partners have come in with some particularly well oriented initiatives and momentum. By meeting each November and reviewing the priority actions needed, SAVE is already helping with coordination, and indeed an updated action plan or ‘Blueprint’ document for the region to 2025 has been agreed. This acts as a respected steer which is already being signed up to by the relevant governments and IUCN. We hope this will also help potential donors recognise the more strategically oriented proposals warranting support and help with the fundraising challenge generally. It is pleasing to note that the governments are showing much more sign of coming in with support here, although there is still a long way to go before RSPB can step back.

If you have a few minutes to hear more detail on all this, do have a listen to Charlie Moores latest podcast interview with me or there’s a great short film that shows you a lot more Things have progressed a long way since we started and particularly since survey results of 2011, I’ve felt the prospect of total extinction for these species has been greatly reduced. These 8,000km road transect surveys that give us the best overall indication of vulture population trends are currently being repeated for the first time since 2011, so we will get a better idea by the end of this year of just how much progress (or not!) there has been for these formerly abundant and majestic environmental cleaners!

Note from Mark: Thanks very much to Chris for this – and he promises another blog on the situation in Europe and Africa in a short while too.

12 Replies to “Guest Blog – The Asia vulture crisis, an update by Chris Bowden of RSPB”