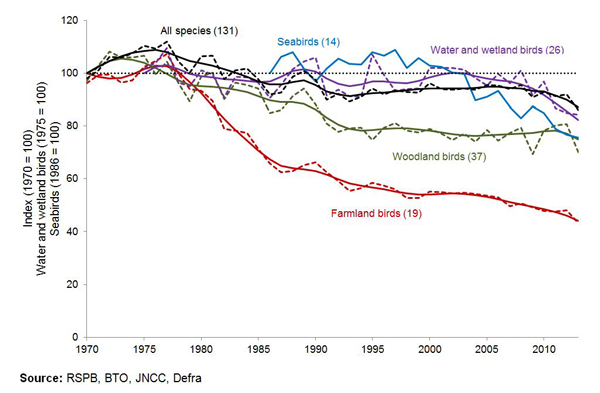 The idea of shifting baselines is an important one.  We tend to be trapped in our own memories – our imaginations fail to grasp what we haven’t seen for ourselves further back in time. We all have our baselines and they affect what we feel about everything, what we regard as normal and acceptable.

In most areas of human existence, each generation grows up with higher expectations than their parents – they started higher up the ladders of material wealth, education, health and, generally speaking, civil liberties. But in the environment it works the other way around. The danger is that every generation starts life with an impoverished natural world compared with that of its parents – and doesn’t really realise what it is missing.

In talks, I give the example of Red Kites here in east Northants – my kids were the first generation for over 150 years to grow up with these beautiful fork-tailed birds in the skies above their school playgrounds. And they and lots of other children and grown-ups love those birds. Before they were reintroduced no-one knew they were missing them at all (they weren’t). But suggest that we rid the Northants skies of Red Kites and the people would rise in protest.

The mark of a radical is to escape the trap of one’s own memories and imagine what might be. The distant past is sometimes a good guide to what a better future might be. And this is an example of where travel does broaden the (ecological) mind. How come the French have so many birds in their farmed countryside? Or you can just think hard about what might be.

One of the reasons I wrote A Message from Martha is that the extinction of the Passenger Pigeon was an example of a biological phenomenon that had slipped beyond our collective memories.

But the idea of shifting baselines applies elsewhere too.

I was talking to someone the other day and we both realised that we were thinking about the statutory agencies.  They have lost many of their good, and many of their senior, staff. Which means that they are losing the collective memory of what their role used to be – and what it could be again. The days when English Nature led (yes! an unfamiliar word in the agencies these days) the opposition to an unregulated introduction of GM crops into the UK are long gone. Would Dibden Bay be repeated these days or would NE find it had to balance all sorts of economic factors against nature protection?

There are shifting baselines of organisational memory too.

This government has cowed its agencies – deliberately I’d say. How easily will they be rehabilitated? And how? Are rescued maltreated dogs ever returned to full mental health?

And the NGOs have cowed themselves…