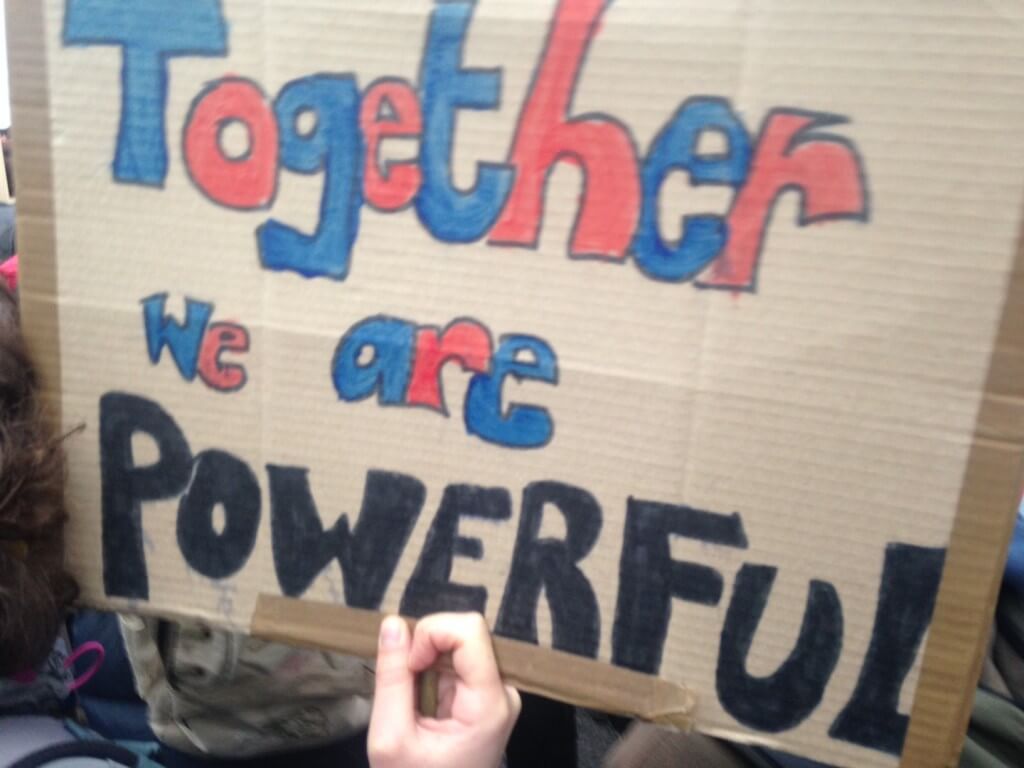 Together we are powerful – that was the message that thousands of people sent to our politicians in London this afternoon – and others were sending the same message in other cities across the UK and across the world this weekend.

Who were we? There were plenty of banners and placards from the usual suspects on climate change: Oxfam, Greenpeace, Friends of the Earth, WWF, CAFOD, the Greens, Tearfund, RSPB, the Woodland Trust and others. I didn’t see a single Wildlife Trust logo but they may have been there too – they said they were!

But Hen Harriers against climate change were there… 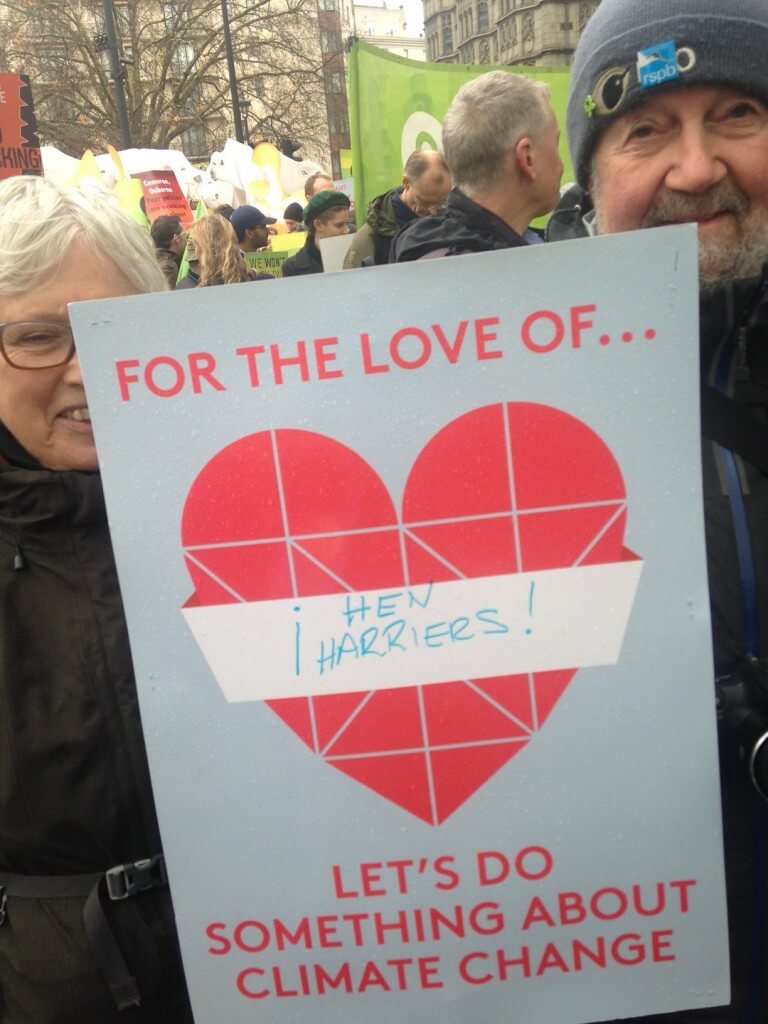 …and it was good to see Richard and Lyn Ebbs. Whenever I see them they are at a march, it seems.

Other strange species were also present as we set off along Park Lane. 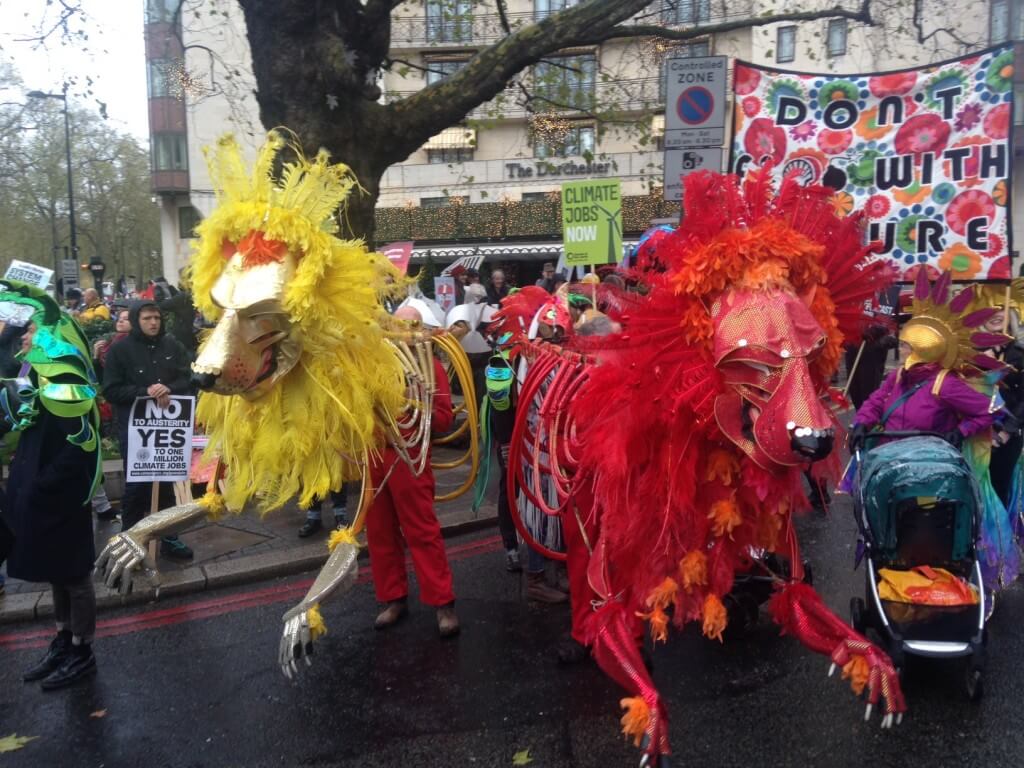 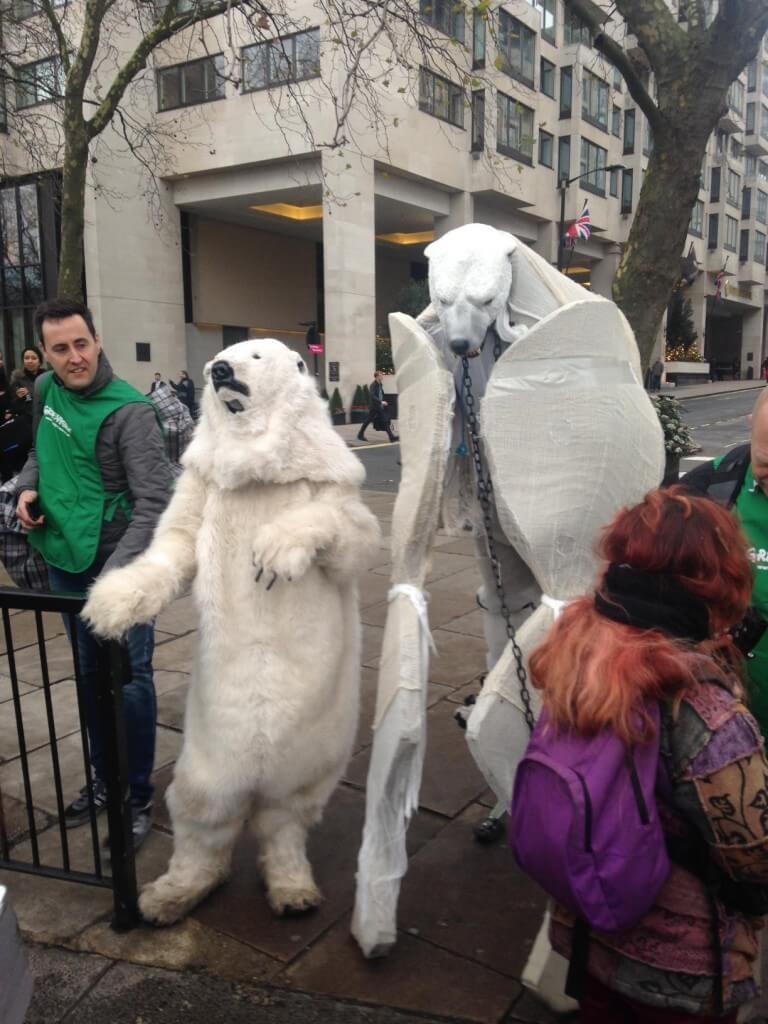 We, we people and sundry animals, were addressed by a range of people, most of whom I couldn’t see, and some of whom I couldn’t hear, and several of whom I can’t remember. But I do remember that as well as Baroness Featherstone (LibDem) and the sainted Caroline Lucas (Green) we heard from Jeremy Corbyn (Lab).  Corbyn, and someone from the fire brigades union, were the best speakers in that they did three things: said something sensible, were audible and were short. They both sounded like people who had addressed public rallies before. It was good to see and hear Corbyn in what some predict as being one of his last appearances as Labour leader!  I doubt it, but you never know.

The government and the Conservative Party did not take up the opportunity to address thousands of engaged voters on the great things that the UK would help to make happen in Paris next week. What a lost opportunity. What a surprise.

While we are at it though, what a surprise that there was no banner proclaiming, grouse moor owners against climate change. Or Countryside Alliance against hot air. Or Game and Wildlife Conservation Trust love people and planet. Or even British Association for Shooting and Conservation for meatless Mondays.  There is no reason why those who shoot should not be just as concerned about the impacts of climate change on rural people, farmers, red grouse, waterfowl etc as the rest of us – but it appears they are not. You, and I, would have been really surprised to see them publicly present at such a rally, wouldn’t we? What does that tell us about their aims?

We carried on our walk, and I met lots of friends and readers of this blog. 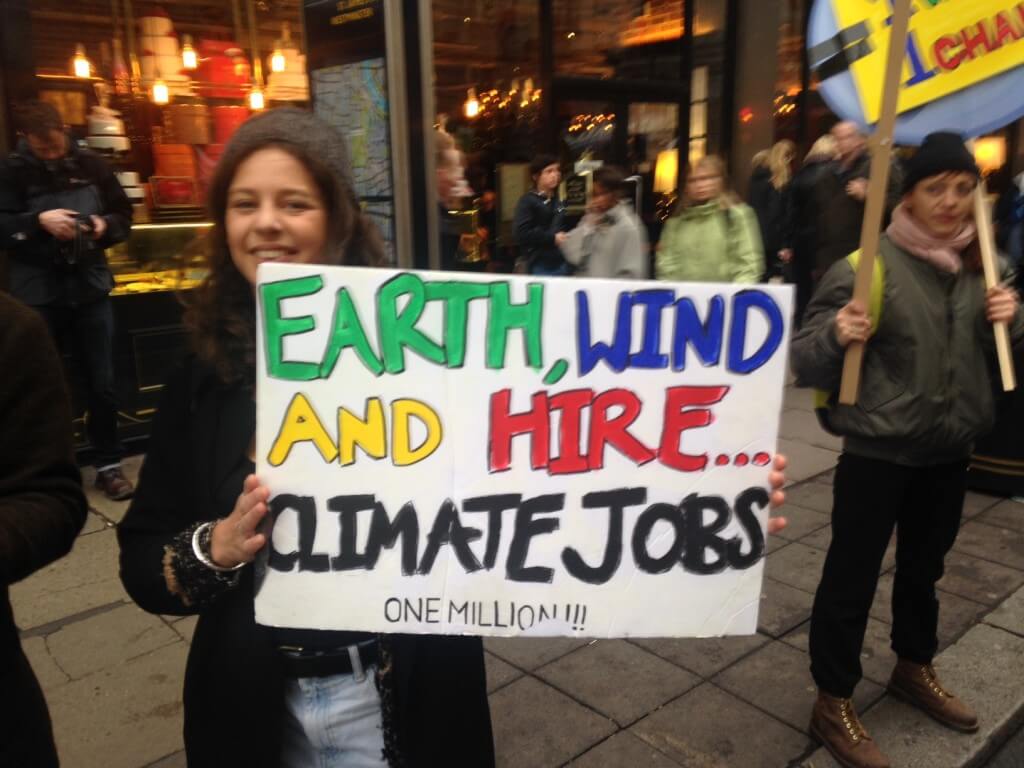 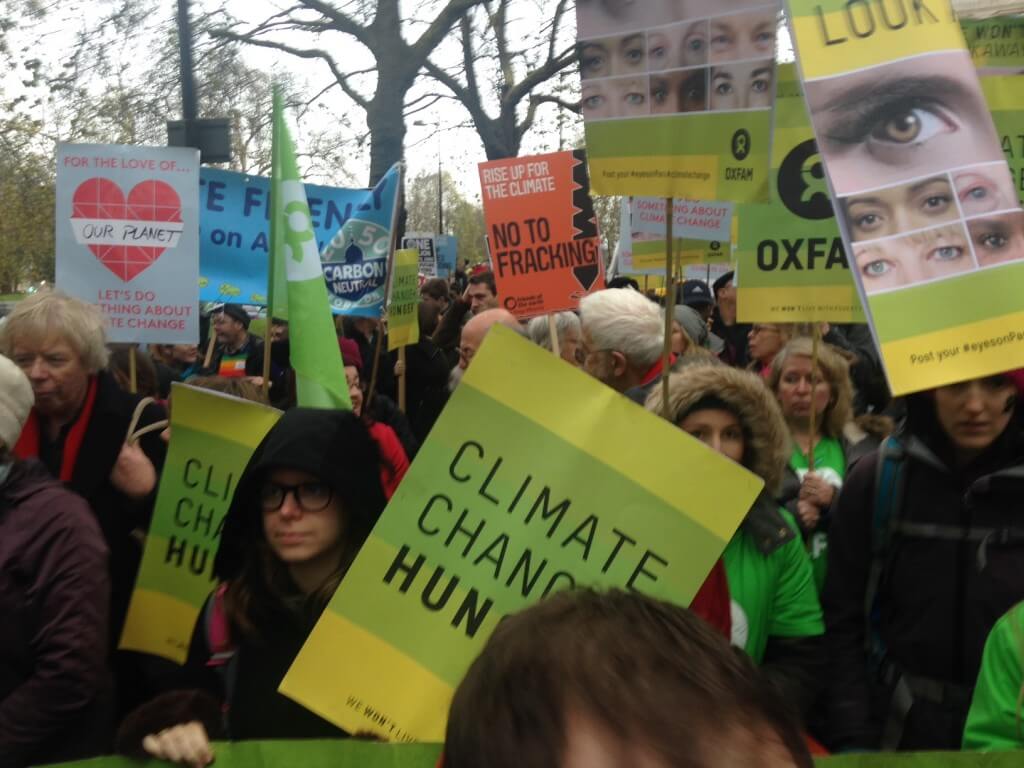 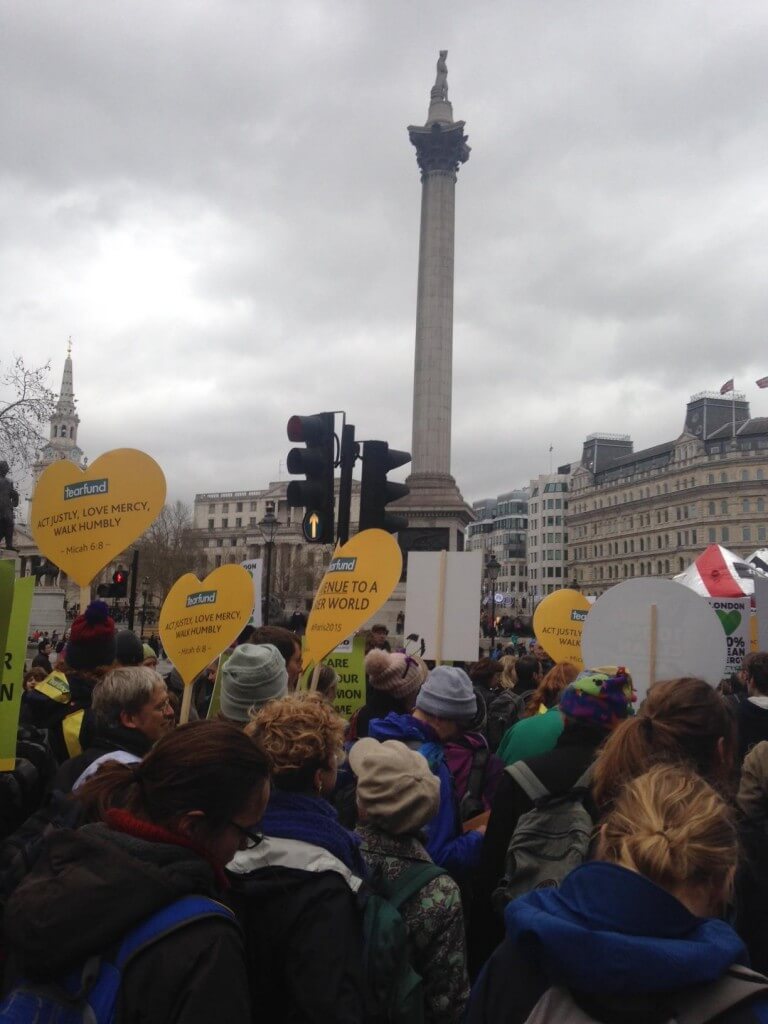 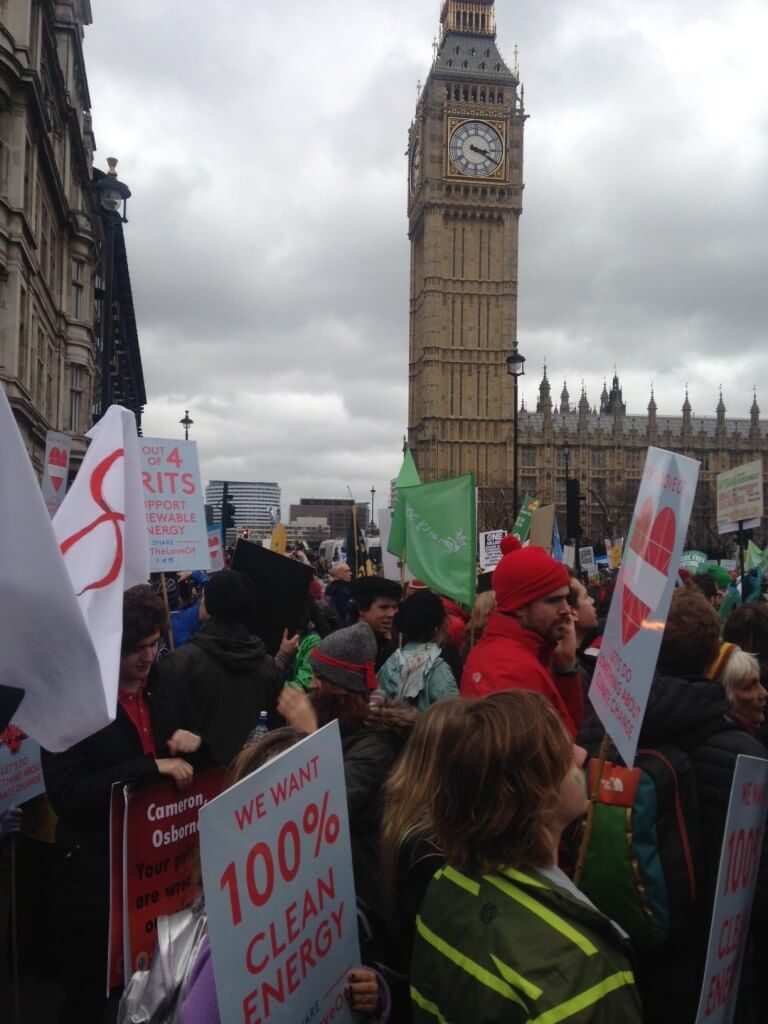