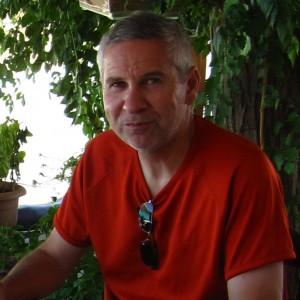 Graeme Walker is a member of the British Dragonfly Society and a lifelong amateur naturalist. Hailing originally from rural north east England, after several decades living in Buckinghamshire, he moved to Orkney in 2013. Graeme is on the committee of the Orkney Field Club and his main interest is Odonata (though that’s not why he moved north!). However, recent events have brought more topical matters from south of the Pentland Firth to his doorstep.

From afar, I have been following, with a great deal of interest, the debate regarding the persecution of Hen harrier Circus cyaneus in the UK. Geography has allowed me little direct involvement, save for online contributions to petitions and thunderclaps, plus the sharing of articles to several Facebook wildlife groups, meaning that the divisive issues affecting Hen harriers have seemed a world away. This is because, fortuitously, I happen to live in a British county that has successful breeding Hen harriers, plus a number that overwinter and I also occasionally see one of these majestic raptors gliding serenely past my lounge window. Some days it’s hard not to be a bit smug. For, as countless media surveys tell us, Orkney is a grand, if windy, place to live. There is some wildfowling in Orkney, but very little grouse shooting and, in recent years, a late summer cull of feral Greylag geese Anser anser (before the wild population arrive for the winter). So, with few threats from the shooting industry, much suitable habitat, a less intensive farming regime, plenty of biodiversity and thriving wildlife tourism, what could possibly go wrong?

Well, in 2010, the first reports of stoats reaching Orkney were received by Scottish Natural Heritage (SNH), though it is not known for sure how the first ones arrived. There are several theories, some more outlandish than others, but the most likely is probably an accidental introduction with a consignment of hay or straw. The Stoat Mustela erminea is a non-native invasive species in Orkney, where the endemic Orkney vole Microtus arvalis orcadensis and many species of ground-nesting birds (waders, raptors and terns) have evolved in the absence of a widespread mammalian predator (less for the feral cat population and some hedgehogs). Without a natural predator to control stoat numbers (e.g. Fox Vulpes vulpes) and habitat that is almost ‘stoatally’ perfect (stone walls and a ditch network), the general prognosis is not good for the Orkney vole.

By their own admission, SNH’s early attempts to stem the manic mustelid tide, using a capture and release scheme staffed by volunteers, was not remotely successful. In fact, during the following few years, the number of sightings increased exponentially, mostly from the road network, which is where the vast majority of human/stoat interactions take place. To date, the sightings are now approaching 500 and most of mainland Orkney is affected. Apparent foot dragging by SNH, or perhaps just a lack of public expectation management, led to the setting up of a local Facebook group, ‘Stoats in Orkney’, where the general public could report sightings of stoats, which were then passed to the SNH office in Kirkwall. In the interests of balance, I can confirm that, following a visit to the SNH office in early 2014, sightings were being logged on an OS map so that hotspots of activity could be detected.

Despite having effectively dropped the small, furry ball, SNH eventually commissioned a report into the scale of the problem, Stoat (Mustela erminea) on the Orkney Islands – assessing the risks to native species, which was published in June 2015. This report concluded that the most likely outcome of the arrival in, and subsequent colonisation of, the archipelago by stoats would result in the population of the endemic Orkney vole falling into a predator pit from which it could not recover. Two consequences of this would be a lack of prey for Hen harriers, Short-eared owls Asio flammeus and Kestrels Falco tinnunculus, as well as the stoats moving onto alternative prey items such as ground-nesting birds, eggs and chicks.

Orkney’s version of a natural history society, the Orkney Field Club (OFC), invited SNH to speak at one of their indoor meetings on 4th November 2015, to shed some light upon the agency’s thinking. In the days preceding this talk, articles about the stoat problem appeared online and in the local Orcadian press. At the OFC meeting, which was well-attended by approximately 60 members and concerned islanders, Graham Neville (SNH Northern Isles Operations Manager) and Rachel Cartwright (SNH Stoat Project Volunteer Co-ordinator) used the opportunity to apologise for previous failings, gave an overview of the 2015 report and called for more volunteers to come forward. Some £500,000 had been made available to fund a new volunteer trapping scheme, which would use lethal traps, with specific training for volunteers and no repeat of the previous stipulation to protect pregnant stoats. The scheme would also be able to provide more data for a further funding bid to secure the finances necessary for a full-scale eradication project, using professional trappers if necessary.

Having reported several sightings myself, each nearer and nearer to my home, I needed no persuasion at all to enroll as a volunteer. I can see how it’s a tricky scenario for a wildlife NGO or government agency, mind. Culling one species to protect others is always going to feel like an own goal, and there’ll be plenty of folk out there who will be eager to point the fickle finger of blame. However, I think the case here in Orkney is a little more straightforward in that the local fauna has not, until very recently, included stoats and so, as evidenced in countless places around the world, a non-native creature will be able to wreak havoc amongst the indigenous wildlife.

The allotted time for the volunteer training came and went, without any contact from SNH, so eventually I called them to find out what was going on. As it happens, the initial training was over-subscribed, and further courses would be run once the first tranche of volunteers had their traps. It would appear, based on this evidence, that communication is still not SNH’s strong suit. Fortunately, whilst typing this article, the latest OFC newsletter arrived, revealing that 54 volunteers have been recruited to the trapping project, with the first 34 now deploying their traps, whilst the remaining 20 volunteers should have their training before Christmas.

Meantime, local folk are keen to keep the pressure on the agency to at least fulfil all the recommendations that were outlined in the 2015 report, if not go further and lobby the Scottish Government for immediate funding for a professional trapping project. The stoat issue is not going to go away on its own, it is only going to become much worse. At present, it is thought (due to lack of sightings) that the outer islands of the Orkney archipelago are unaffected. However, following poor weather throughout the Spring and Summer, this year has seen low crop yields. This means that yet more hay and straw is being shipped from south for over-wintering cattle, with the consequent danger of more accidental introductions if some method of quarantining the shipments cannot be agreed and put in place.

The direct threat to the Orkney vole is very real, and the indirect fallout will affect those species that have evolved to prey upon it. This is a very different Hen harrier problem to the one we have been following in the rest of the UK, it is not about illegal behaviour or vested financial interests. It is solvable, but it needs national and local governments to work together, with wildlife NGO support, along with an informed and galvanised local community. The alternative is unthinkable.