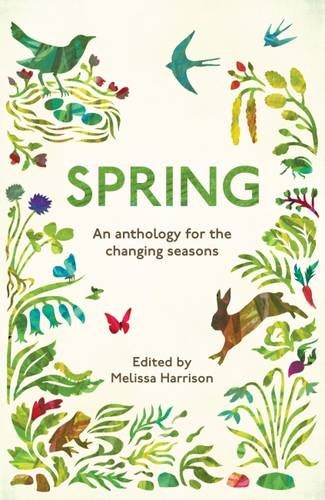 A collection of writings about spring – what could be nicer?

This book is one of four on the seasons.  Are there really four seasons, I wonder? I’m not totally sure that summer exists – doesn’t spring (March-June) just fade into autumn (July- December) and then there is a bit of winter (January and February), with some leeway at each transition and false starts, false finishes and just odd weather?  But I do believe in spring – and spring is wonderful.

In this book, published enterprisingly by The Wildlife Trusts, there is, rather cleverly I thought, a mixture of writings from the old (or mostly dead) and famous, and the very much alive. This means that there are some old favourites, Thomas Hardy, Gerard Manley Hopkins, Gilbert White, Robert Browning, Jane Austen and many others but not necessarily with the extracts that you might expect or remember, but also writings from those you have never heard of (though to be honest – I do know some of them!).

I liked this approach, and found myself enjoying the modern, unread, new pieces just as much as (actually, often more than!)  the older pieces by the famous. I’m not sure why, but it might partly be because the modern writings were more specific, better informed and more often about species than about ‘spring’ itself.  There is no reason why your favourites should be anything like mine, but for what it’s worth, my favourite ‘new’ was by Nicola Chester and my favourite ‘old’ was probably that from Mansfield Park (Jane Austen) which I have to confess I have never read, so it was new to me.

I’ll look forward to the next three volumes, even though summer doesn’t really exist (I wonder whether June, July and August will convince me that I am wrong this year), but none can match spring for excitement and beauty, but we’ll see if they can for writing.

Spring: an anthology for the changing seasons, edited by Melissa Harrison, is published by The Wildlife Trusts.