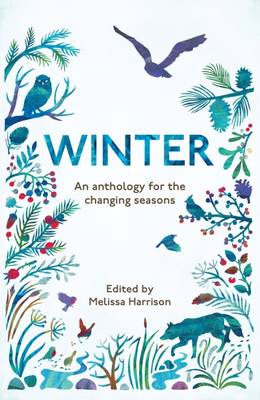 This book is on the same model as the preceding three volumes: an anthology of seasonal nature writing with a mixture of work from well-known and older writers and some very modern pieces too.

I liked Spring, Summer and Autumn and I like Winter too.

It felt as though there were more poetry in this volume, which I liked (though I haven’t actually counted up) but the fact that Hardy’s The Darkling Thrush is included made me very happy, and there is a new-for-me alternative thrush-singing-in-winter poem by Edmond Holmes (from 1902). These were alongside some Shakespearian sonnets, and lines from Clare and Wordsworth amongst others.

There were two mentions that I spotted of Hen Harriers, both firmly in the modern category (by Lucy McRobert and David North) which would grace any anthology.

A couple more highlights for me: Patrick Barkham wrote about going egging in winter (butterflies, of course, not birds) and there was an account of a Boxing Day hunt (which redressed the balance of country sports writing that I mentioned in a review of Autumn).

If you like one of these anthologies then I can’t see why you wouldn’t like the other three. I liked them all.  I liked the selections because they felt like a good mixture of familiar and unfamiliar (to me) selections from older, mostly dead, writers but the books are made, to my mind, by the quality of the more modern pieces. These are uneven in quality, but maybe what I think are troughs you would think of as peaks, but the high points were high and sometimes outpeaked the older works (for me). I was wondering why I thought this – and I think it’s because I like to think of someone experiencing nature now, in the modern world, in my world, with my cultural connotations, rather more than I enjoy reading a passage which although about seeing nature now is written in a style which clearly signals that it was written a long time ago.  A Victorian looking for butterfly eggs would not seem as real to me, I think, as a modern-day writer doing the same. And that’s where poetry comes in because The Darkling Thrush feels as real and as alive to me now as I think it would have done if I had read it fresh off the page when written.

Each of these volumes feels slim but each is packed with good writing. And the four volumes together should sit along many a bookshelf and in a place where they can be reached down for a helping of spring in autumn or the best of winter writing in winter evenings.

Congratulations to Melissa Harrison, the Wildlife Trusts and Elliot and Thompson for producing these books.

Winter: an anthology for the changing seasons, edited by Melissa Harrison, is published by The Wildlife Trusts and Elliot and Thompson.