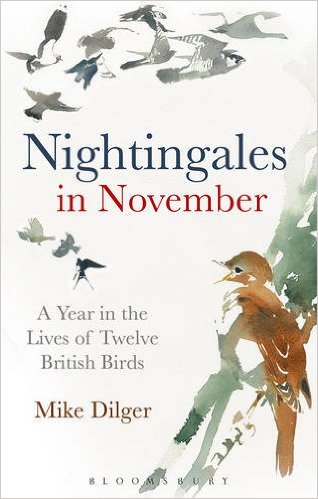 This book has a clever title and a lovely cover by Darren Woodhead. Its author is also a lovely guy: a good broadcaster, great conversationalist and a real laugh. However, despite all that, I’m not won over by the book.

It is also based on a clever idea – take a dozen birds and write about what they are doing, where they are etc for every month of the year. The trouble is, although I enjoyed much of the book, this seemingly-clever idea doesn’t really come off – not for me anyway. And that’s not through lack of skill of the author, who writes lots of good passages here, but there isn’t that much to say about Puffins in October that is very different from Puffins in November. The structure of the book is disjointed and doesn’t well serve the telling of good stories. And that’s a shame because Mike Dilger is a very good story-teller – both face to face, on the TV and in writing.

But the book could also have done with a very hard edit: there are many misused words and stodgy passages.  But it is the structure which kills it off.  The book has far too many awkward links between one species and another – and, remember, each chapter has at least eleven of these attempted segues.

Bloomsbury should have done a better job at sorting out some of these issues. They haven’t done the author, or the reader, many favours here.

Nightingales in November: a year in the lives of twelve British birds by Mike Dilger is published by Bloomsbury.