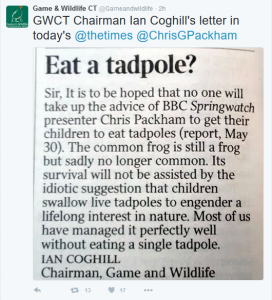 The GWCT (Gunning wildlife, conserving tadpoles) thrash around in  a complete dither these days.

They don’t know whether they are coming or going – quite literally.  Having said that they would be pleased to field someone for the Bird Fair debate on whether driven grouse shooting should be banned they have now come back to me to say that they cannot find a single person from their membership or supporters who will face a friendly Bird Fair audience and argue for their ‘sport’. Where are you Beefy Botham? Ian Coghill? Teresa Dent? Duke of Westminster? Earl Peel? Charles Moore? Nicholas Soames? Paul Dacre? Magnus Linklater? Philip Astor?  You can’t all be blasting away at Red Grouse that day surely? Andrew Gilruth is on holiday – fair enough, but he does seem to be the only person ever prepared to try to defend the grouse shooting industry.

But Gunning Wildlife, Conserving Tadpoles is very worried about vowels because ‘some managers’ are ‘reporting’ a ‘significant decline’ in vowels this year. This is clearly a bit of a defensive move which is trying to frame the Hen Harrier crash in England as being due to lack of vowels in the hills. Hn Harrirs are wll known to b partial to th odd vowel – thy ar particularly kn on ‘e’s. No ‘e’s and Hn Harrir numbrs plummt is what I suppos GWCT ar trying to tll us.

The RSPB said ‘We welcome this statement from the GWCT – it makes as much sense as any of their others.‘

13 Replies to “Lack of vowels shock, warning by wildlife gunners”