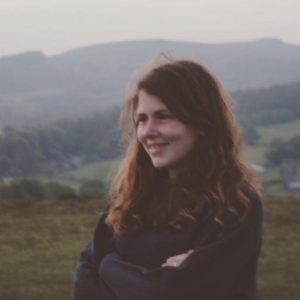 Tiffany is a nature writer, illustrator and conservationist living in the South Downs, Hampshire. She is about to complete her Masters in English at University College London and volunteers for the Hampshire Wildlife Trust and Bat Conservation Trust. Her first book will be published by Bloomsbury in Spring 2018.

I have never seen a hen harrier. I’m twenty four and live in the Hampshire end of the South Downs National Park, ideal territory to find such a bird looping through the midwinter sky like a dusky acrobat. Each day I peer into the ether and see raptors tumbling out of every cloud: mewing buzzards in pairs, hobbies and peregrines squabbling with rooks, tiny kestrels and blazing kites twisting through the ancient forests and farmlands of southern England. Both my ornithological friends and the wise old internet have told me that visiting harriers from Europe like it here, and in the stunning moorlands of northern England there should be 332 pairs of hen harriers nesting each year. So where are they?

Amazingly, in 2015 only six hen harrier nests were successful, with eighteen chicks fledging in total. Harriers love open habitats like heather moorland and agricultural land, and often build their nests on land used for driven grouse shooting, one of our country’s many ludicrous bloodsports that a sliver of society chooses to keep alive like an old, rabid dog. Not only does grouse shooting require intensive habitat management that increases flooding and greenhouse emissions, but it also leads to the illegal persecution of protected birds of prey. As hen harriers spend much of their time around grouse moors, an ignorant minority of gamekeepers believe these isolated birds have an effect on precious grouse numbers and deliberately shoot them or destroy nests. Although the industry itself claims to be against raptor persecution, this minority have caused hen harriers to almost disappear from our landscape.

As a young naturalist, I find it abhorrent that my native countryside is being stripped of wildlife and diluted by the profiteering exploits of landowners that should be protecting the species living on their soil. They will argue that without these profits the countryside would be developed and destroyed – but what are they doing instead? Obliterating local ecology and shooting birds of prey to fill pockets and serve the elite, rather than using their money and influence to stand up for wildlife. This August I will be attending my local Hen Harrier Day in Dorset, and I will fight for the future of our countryside so that my children and grandchildren can grow up in a rich and colourful natural world. There is a quote attributed to Edmund Burke that has come to mind frequently in recent years: ‘All that is necessary for the triumph of evil is that good men do nothing.’ From EU membership to fracking, I’m tired of watching the country be torn up and trampled by others that will never suffer the consequences of their actions, and I urge other young people to take action and fight for what matters to you.

I have never seen a hen harrier, but my grandchildren certainly will.