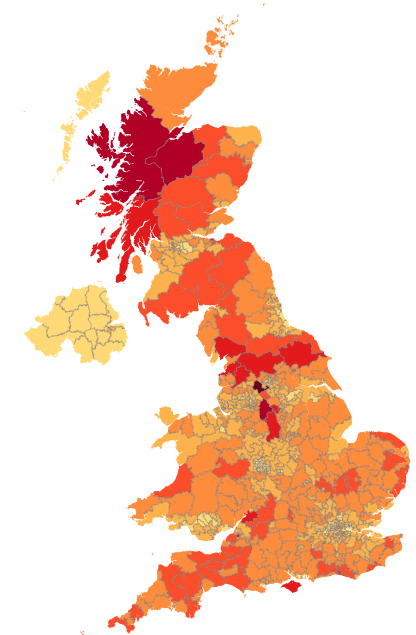 Here’s a list of all the constituencies over 350 signatures:

Those underlined and in bold have had at least one constituent writing to the sitting MP and expressing their support for the ban driven grouse shooting e-petition. That’s most of them, but come on, please, fellow Bristolians and get writing, and you in Stroud too, and where are the letters to the former Deputy Prime Minister, Nick Clegg, in Sheffield Hallam?

Over 200 of you have written to your MP (about 160 of them) and asked them to attend, and speak in favour of change in the uplands. That’s fantastic – but more letters will help get an even better response.

Just as an aside, the gender of those getting in touch with me saying they have written to their MPs is  2men:1woman, which might indicate a lot of response from men, but I’d interpret it differently. I think most of the comments on this blog come from men, and every poll I have had here, without checking, I believe has had a preponderance of blokes too. Feels to me that when there is some real work to be done, writing a letter, it’s the ‘fairer’ sex which leaps forward with most enthusiasm.  So come on blokes (and gals!) get writing, please. The response so far is fantastic – amaze me even more, please.

And responses are coming back from some MPs – thanks for sending them through. Some are good and some are pretty bad.  The bad ones are standard replies provided by the political parties, and so many people are getting the same words back. On Friday I will start giving you words that you can use in response to some of these words (a job for the weekend?). By replying to your MP you will show her or him that you know what you are talking about (and that she or he doesn’t) and you will help improve the factual accuracy of what other writers receive – ‘Firm briefing’ will keep MPs honest and help raise the level of accuracy of the debate on driven grouse shooting.