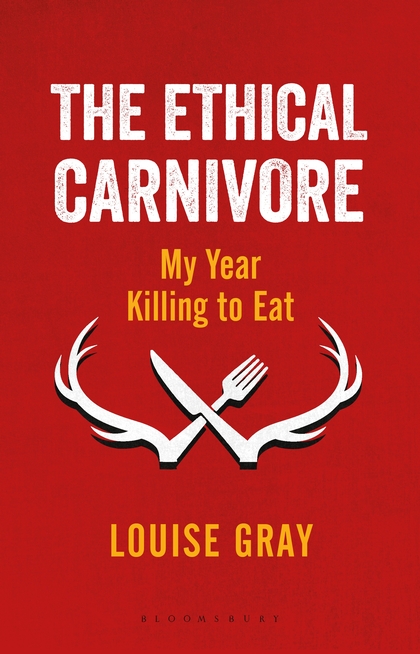 Louise Gray is a former Daily Telegraph environmental journalist. She writes well and this is a book that all should read – but it isn’t simply a duty, it is a gritty pleasure.

Louise set off on a year’s journey only to eat meat that she had killed herself – despite being close to being vegetarian anyway.  So there’s the first tension that runs through the book – the author isn’t that keen on meat, and is rather keen on animals, but she sets herself the task of taking responsibility for the death of many animals in order to get deep into the issue.

How will she cope with the angst? Will she cope? How will she feel at the end of it? What does she make of the people she meets along the way who kill animals for fun, or because it’s their job, and what will she think of the rest of us who eat meat and get someone else to do the dirty work for us and don’t think about it too much?

As the daughter of a farmer, and a country girl, Louise might be expected to show more sympathy for the hunting, shooting and fishing folk that she meets than actually comes through in this book. There are a couple of passages in the few pages on grouse shooting that suggest that Louise has swallowed a rural myth hook, line and sinker in one case and has misunderstood the issues in another. The mistake is the last sentence on p187 ‘Conservationists blame grouse moors for continuing to persecute hen harriers, although no-one has ever been prosecuted for doing so‘.  See Inglorious p40-41 for one conviction of a gamekeeper for killing a Hen Harrier and another of a gamekeeper for ‘going equipped to kill a hen harrier’ (also note Louise’s use of the word ‘blame’ which suggests that this might be rather unfair of them/us).  The misunderstanding comes in Louise’s short description of brood meddling – it’s not surprising that she misunderstands it, it doesn’t make any sense.

But I feel a bit mean pointing out these minor lapses because this is a largely unbiased book and one which should interest a wide range of people. If you eat lots of meat, or none at all, or somewhere in between, then you will be stimulated to think about your decisions and their impacts by moving with Louise on her journey.

In India about a quarter of the population is vegetarian, in the so-called developed world the figure is usually less than 10% and often around 4%.  I have at least four, but often more, meat-free days a week but the lamb chops I ate last Sunday were delicious – and a treat (and yes, I know where they grew up, I saw them walking around the fields and I know the farmers who produced them (by their first names)).

Reading this book might nudge you to eat less meat and to think about it more.  But even if it doesn’t, and it’s not at all preachy, it is a thought-provoking and enjoyable read.  But now and again, when a life is about to end, you’ll feel the emotion of the author and it will make you look at dinner differently.

The Ethical Carnivore by Louise Gray is published by Bloomsbury.