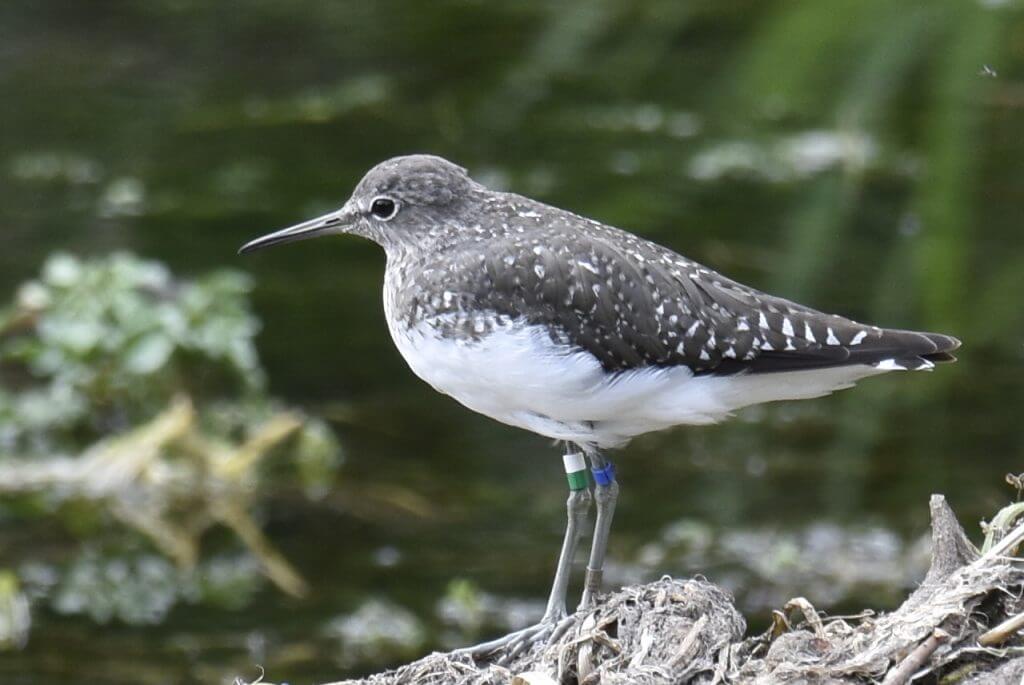 Did you read this blog about a Green Sandpiper who travelled from a cress bed in Herts to its breeding grounds near Trondheim in Norway?  Well this is the bird itself (above).

Barry Trevis took this photo a while after he had removed the GPS tag which held all the fascinating information on the bird’s movements and travels.

Barry tells me: ‘Just to add a little more detail, after reaching southern Norway (a lake on Store Saesøy island) from Lemsford Springs in two days on 28 April, as mentioned in your blog, White-on-Green then arrived at Eidsvag, at the end of Langefjord, near Molde, in central Norway two days later. Two days after that it was in its breeding territory in open coniferous forest with nearby lakes, near the village of Stod, 110km NE of Trondheim. It was last recorded there on 13 June and returned to a local lake within 2km of Lemsford Springs on 21 June, with one record in between on (or possibly flying over) the Hardangervidda in Norway in between those dates.

White-on-Green was present on the watercress lagoons at Lemsford Springs today.‘

Amazing isn’t it? We all know that Green Sands nest in Scandinavia (amongst other places) but to look at a bird in Hertfordshire and to know just where that actual bird was through the summer is enough to make the hairs on the back of your neck stand up, I think.

I was interested to see that White-on-Green flew over the Hardangervidda in mid- to late-June – I was there at that time of year 38 years ago, studying Purple Sandpipers, Dotterel and Great Snipe (and seeing my first Cranes, Lapland Buntings and Long-tailed Skuas). Seems a long time ago.