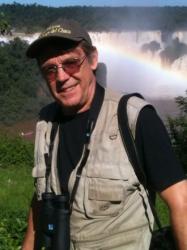 John Burton is one of the most experienced and free-thinking of British conservationists. He was a founder and the first chief executive of the World Land Trust. He stood down from that position recently but will still be working hard for WLT into the future. John has just started blogging himself, here.

One of my more controversial stances (though not widely publicised) in conservation has been my opposition to having Royal patrons. When I was the Executive Secretary of the the Fauna and Flora Preservation Society (now FFI) we had the Queen as a royal patron, a tradition following on from her father. It seemed thoroughly pointless, but since the Queen was patron of literally hundreds of charities, and she didn’t actually appear to have any impact on the organisation, either positive or negative, at the time (nearly 30 years ago), there seemed little point in my saying anything against her patronage. And me saying anything might well have had a negative impact on some supporters at that time. But the Royal family have always been potential problems for conservationists, because just as they love to support conservation as ‘good cause’  at the same time they all want to continue shooting wildlife. Prince Philip was for many years President of WWF, despite having been widely criticised a decade before its founding for shooting a tiger.  At the time the Daily Mirror urged him to take a camera, not a gun. Prince Charles is an outspoken advocate of conservation, but supports fox hunting as well as pheasant shooting  and the next in line, Prince William wants to become the saviour of rhinos and elephants, but got seriously criticised for defending trophy hunting and going on a wild boar hunt, the day before he launched a campaign to save elephants.  More recently, but just as controversially, Prince William apparently continues to go grouse shooting on grandmother’s estates.

50 years ago it might have been acceptable to shoot grouse, but now it is a highly organised industry, destroying vast areas of natural habitats, causing flooding and is the root cause of the decline of the hen harrier. Pheasant shooting involves releasing some 40 million plus captive bred ‘chickens’ into the wild, to play havoc with lizards, slow worms, as well as invertebrates. And do we ever hear the royals condemning lead shot — a poison being scattered willy-nilly in the environment? Do we hear them speak out about releasing millions of captive birds simply to be killed? Do we hear them speak out about the killing of hen harriers etc?

However it appears than none of the leading conservation organisations are prepared to take this issue up; only the animal welfare groups, despite the fact that there are very serious conservation issues involved.

There is a possible reason none of conservation bodies speak out. Could it possibly be that it’s because the Wildlife Trusts have as their Patron Prince Charles, FFI the Queen, RSPB the Queen, WWF Prince Philip, United for Wildlife Prince William? Prince Charles is President of WWF, and so it goes on. It’s difficult to find a major organisation without one or more of the Royals involved.  For a nicely biased view to conclude with I suggest reading this.

But perhaps we conservationists should be taking the matter up with the organisations we belong to. Their Royal Patrons should be helping the causes they support, and speaking out about these environmentally important issues.While the Royals are generally precluded from speaking on political issues, there is no reason why they should not support the campaign to prevent the persecution of Hen Harriers.