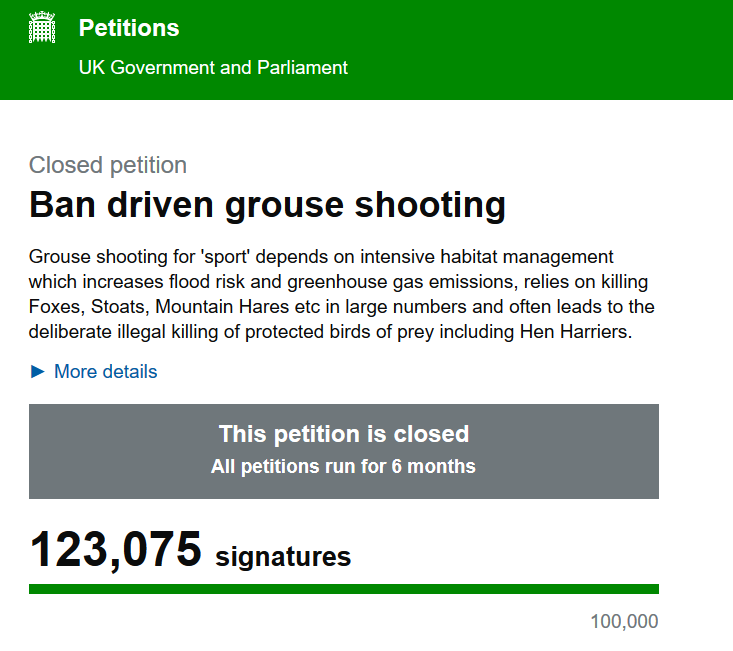 When you close the debate on the future of driven grouse shooting this evening we will listen carefully to your words. Have you listened to the views of the public on this matter?  It would actually be a popular move to ban driven grouse shooting and it will be very unpopular if you do not unveil a new approach to regulating this damaging hobby and enforcing existing regulations.

First, of course, we are only in this position because 123,077 people have signed an e-petition on the parliament website in favour of this proposition. The debate that you will close is only the 40th to have taken place after such a public expression of concern – if government ignores those wishes then parliament should, and probably will, begin to ask more and more questions of government over its actions.

There is a rival e-petition in favour of grouse shooting which has spectacularly failed to gather public support: today it ought to be at 40,000 signatures if it were to equal the support of the ‘ban’ e-petition after the same length of time – it is stagnating at 24,000 signatures. This demonstrates that the grouse industry’s claims of public support, like their other claims, are not well-founded.

I know of two YouGov polls which have asked the public whether they would support a ban on driven grouse shooting – both indicated strong, in fact very strong, support for this measure.

The most recent was UK-wide (2033 respondents questioned on 19 & 20 Sept 2016) commissioned by Animal Aid shows that 48% of people would ban driven grouse shooting – only 28% oppose a ban. So when you take out the undecideds that’s 63% in favour of a ban and 37% against it. Since 52% is enough to take us out of the EU, 63% must be enough for us to ban this pointless and unsporting ‘sport’.

In another YouGov poll (carried out in mid-March 2016) a clear majority of Scots (52%) indicated that they wish driven grouse shooting to be banned.

The results of the call for written evidence on this subject are also illuminating – not conclusive but certainly illuminating. Of those 173 responses where it is clear that the respondents were not associated with driven grouse shooting, 162 of them wished to see a change from the status quo. Those 162 favoured licensing (27 people), the introduction of vicarious liability (67 people) and a complete ban on driven grouse shooting (116 people).  Thus we can see that those who can be regarded as not having a personal vested interest in grouse shooting favour change, and favour a ban.

Of around 200 responses from individuals or businesses that were clear enough to have declared an interest in driven grouse shooting only a handful were prepared to countenance the possibility that any change was necessary in terms of regulation. In other words, those profitting from this unsustainable and damaging activity wish it to be left alone – indeed some believe that it is too harshly regulated at present.

It’s not unusual for industries to claim they are perfect (and over-regulated) and the public who help pay for these activities through a variety of means, and who suffer the undesirable consequences of those activities, to call for change. That’s why we have governments, to weigh up the evidence and to act for the many and not just the rich and powerful, as our new Prime Minister has often said.

No government should act foolishly just to be popular, but nor should any government be afraid of acting wisely just because it might be unpopular. In this case you are in the fortunate position of being able to act wisely and be popular.

2 Replies to “Dear minister 3 – what do the public think?”