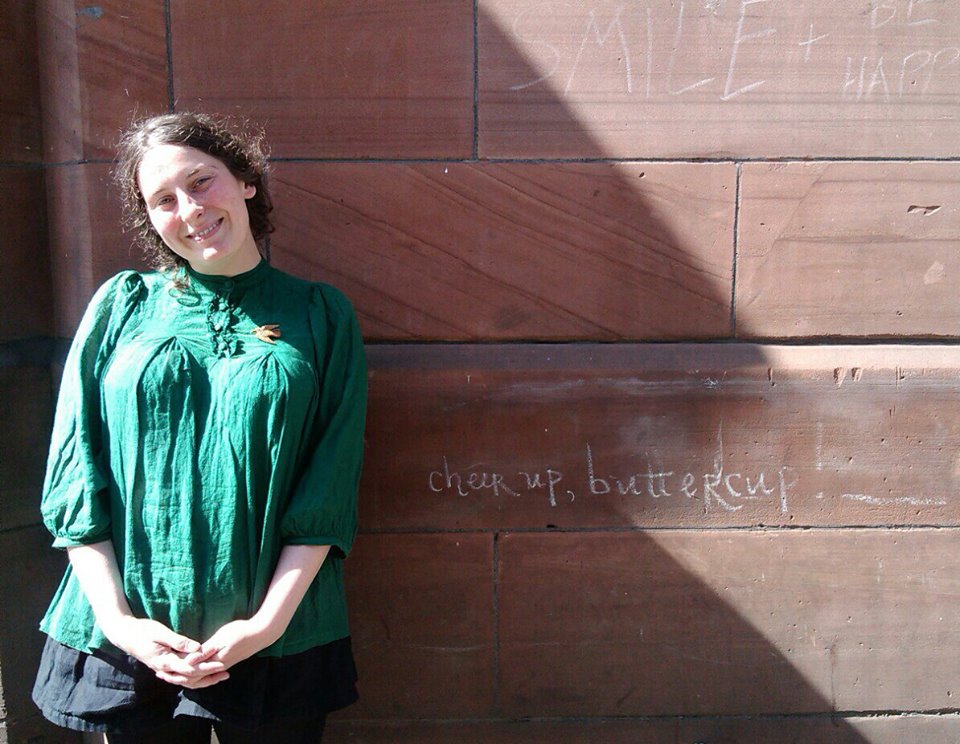 Kerri ní Dochartaigh grew up climbing trees, eating beans on toast, watching birds, swimming in the Atlantic Ocean and making wreaths from wild flowers. She still does all of these things. She read English Lit and Classics at Trinty College Dublin and taught in Steiner Schools in Edinburgh and Bristol. She finally moved home to her green island in the Spring where she writes at an old and worn table with the back door open to the wind, even when it snows. Kerri’s website.

The year I was born, Madonna’s song ‘Borderline’ peaked the charts in Ireland-the only place it reached number one on our entire blue planet. Madonna’s ‘Borderline’ was an imaginary boundary  her love kept being pushed over. I had my own borderline; somewhat different from hers. My borderline runs for 310 miles and separates the North of my beautiful Island from the South. My borderline is geographical in so far as it roughly follows water courses, in accordance with remnants of 17th Century county limits. My borderline is, in reality, a political line no-one can fully understand, no matter how strong the charcoal strokes have been laid on the page throughout the near century it has been being drawn and redrawn for.

I grew up in a terraced house on a Council estate in Derry-Londonderry, or ‘Stroke city’ as it would be called decades after my childhood; once the incomprehensibly horrific  ‘Troubles’ had more or less stopped. Rather, I grew up in the garden of that house, spending as much time knee deep in the muck that never ever left due to the unstoppable rain that swept in from the wild Atlantic. Ours is a past seeped in rust, a history bathed in thick black squelch; mudlarking, always, for our sense of self.

I was outside every chance I got, not because I didn’t have a lovely home-my Mother filled our space with colour and beautiful wild flowers. I was outside because it simply made no sense to me to be indoors. My Ma and Da would find me, utterly transfixed and bogging dirty: hands holding treasure unthinkable in our half concrete-half muck rectangle of garden. I’d beg them to close their eyes and open their grown up hands so I could fill them with the wonder of the living, breathing, dying world. Broken bricks in the corner of the back yard filled up with ladybirds in descending size order, each limb and wing compared and contrasted against its brother or sister. Frogs would come to our garden from the stream at the bottom of our housing estate to die and I buried each one with a hand-written poem; candle wax dripping onto their hardened bodies in the damp Spring air as the younger me tried to hold too many funeral instruments in her small, freezing hands.  It would be two full decades before Richard Louv would give a name to the problem my Mam could see the beginnings of in me during those early days in our housing estate’s concrete, impoverished world. Twenty years of civil war: in our public spaces; our sacred and safe places, had resulted in a deep-rooted fear the ripples of which could be felt in more than just the devastating human loss. When whole streets are burned down and the face of a city changed beyond recognition, very few folk notice their disconnect with the natural world. When you’ve no home to go to because it’s been petrol bombed, seeking the wonder of the wild world is maybe not a priority. Derry was a dark city to be in for my childhood and I was scared. One of my parents is Protestant and the other Catholic. As a child I knew the disgusting words being thrown around my street as loosely as lemonade bottle petrol bombs were about Catholics just like my Mam. I knew everything could just go up in smoke as you were walking to buy electric to feed your squealing meter; (poverty bells). I was terrified and the only thing that made it all go away was nature- I wanted to reclaim all the things I didn’t even know I had lost to those brutal years of violence. I wanted to be in the wildest place I could find that hadn’t been stolen from me. The worse things got in our council estate: weans being suffocated with flags for being from the wrong street, punishment beatings, cruelty unnameable, the more I retreated into myself. I stopped talking, apart from to my newborn brother, and would sit at the bottom of our garden facing the grey plaster wall for hours alone. They knew I needed an antidote, and they took me to the thing that I needed.

The first time we went to Donegal it took three hours to cross the border. Documents meticulously scrutinised, a one in/one out policy and English soldiers in heavy green uniforms was unlike anything my brother and I had ever experienced before. When we eventually crossed over the line we have still never seen, our whole world changed shape and colour entirely. The grey was gone and there was cinematic blue water all around, highlighted by golden sandy beaches held in place by hedgerows full to the brim with wild flora. From the age of four onwards, through deeply traumatic and unsettled times on both sides of the border, I have been brought or found my own way to Donegal to seek solace in the weeds and wilderness it holds in its hidden places. The Christmas my Father left our home, both of my parents tired out beyond compare by the struggle of just trying to get by in the midst of a bloody and horrifying day to day life, my brother and I were followed from the top curve of Kinnagoe Bay to our car at the cove by a wild red fox. I remember feeling like he had been sent as a gift to help us through; ours for that stolen walk together, from a place unknown.

The year the ‘Peace Process’ began: we, ladybirds, frogs, sparrows and all, were petrol bombed out of the home I loved so well. I was in my first year at big school and the marks my cat left on my face when she was wakening me in my smoke filled bedroom left me embarrassed in Assembly for months. However my overarching memory of that year was encountering my first whooper swan making for the sky above Inch Island. I have never quite got the sound of those powerful, folkloric wings beating out of my insides.

The natural world in that wilderness across the border dragged me back to the land of the living. It was the compass that guided me through an unnavigable body of water created by the Troubles that battered Ireland. Every bird: goldfinch, mute swan, peregrine falcon, oystercatcher, corncrake, held the promise of an escape from the present moment; a new path of flight. Every butterfly: tortoiseshell, peacock, cinnabar, copper, speckled wood, spoke of hope and the potential for unrecognisable change.

The great Seamus Heaney wrote these words when I was a child and when I read them as a teenager I wept. I still weep when I read them, moved beyond words by their resonance.

“So hope for a great sea-change
On the far side of revenge.
Believe that further shore
Is reachable from here.”

Ireland has experienced that great sea change, and the shores of Donegal with their unrivalled beauty are more than reachable from Derry now. They are, in fact even swimmable, under a canopy of healing blue as the oystercatchers sing their siren songs; on both sides of the border.