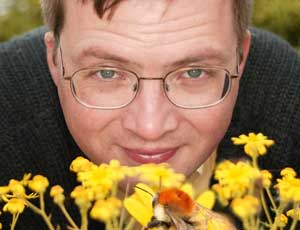 Matt Shardlow was on Farming Today this morning (before I was awake for once)(click here, 9 mins in) doing a spirited job. I don’t know the ins and outs of the subject so I can’t tell you that Matt was right, but it would be possible to check.  But I am sure that he sounded as though he knew what he was talking about, and he sounded as though he had the evidence to back it up.

He also did a very good job in getting on the front foot and challenging what the industry report says.  That takes quite a lot of skill and nerve in such a situation.

I like Matt’s style. We need more feisty people like Matt in nature conservation (however cherubic they may appear). And so tomorrow (Friday 13th! Eek!), when it is Matt’s birthday, we all ought to wish him many happy returns of the day!

And I notice it is a long time since Matt wrote anything for this blog (The flight of the neonicotinoids, 20 February 2013; Buglife, 12 November 2013) – time for another Guest Blog, Matt?

Note added today: Happy Birthday Matt!  On today’s Farming Today they have just returned to the subject of whether oil seed rape yields have increased or decreased.  In the last three years yields have increased in  two years and decreased in one year. I would say that the statistician brought in to adjudicate did more for Buglife’s Matt Shardlow’s credibility than the industry’s report – matt’s argument was that there was no good evidence of any harm from neonicotinoid ban (in fact it looked as though yields had increased!) whereas the industry claimed there was evidence of harm.  Charlotte Smith could have done rather more to make it clear that this was a victory for the environmental argument but one rarely gets that on Farming Today.