I learnt a new phrase last week – Public Goods. This is being used in DEFRA led discussions about the future of our rural environment post Brexit. For our uplands Public Goods are the value to the wider community, of any part of that environment. Looks like DEFRA have been listening to Chris Packham all along, Chris of course talks about Hen Harriers as our national treasures.

In these two guest blogs, I’ll take a look at some landscape scale developments which have affected the Peak District National Park and also local problems in more detail. Taken as a whole we can then see how this impacts the communal value of this area.

Two surfaced roads were built recently in the north east peak and this prompted the National Park Planning Authority to issue guidance recently (not yet online). The Authority has a duty to preserve the landscape and character of the park. Mark Avery often talks about grouse shooting as recreation and you’ll see that the House of Lords agree in their ruling Earl of Normanton v. Giles 1980. This is crucial as many agricultural and forestry activities do not need planning permission, but shooting does. This guidance is specific to the Peak but the Yorkshire Dales National Park should work in the same way and beyond the national parks each local authority will have the same responsibilities. This opens up another avenue to get moorland roads removed if Natural England are not helpful. You will need photographic evidence, the crucial thing is to show the route was unsurfaced previously. Google Earth or Getmapping can provide historical aerial images. It helps to see your MP and have their name copied into all emails, this means you’ll get a reply in a week rather than 6 months. You will probably find there is a time limit on this type of action.

You will have already seen this plastic track that was created at Midhope. This track is a direct consequence of intensive grouse moor management. Habitat was being damaged by repeated vehicle use. I would have thought the obvious solution was to stop the vehicles, but instead this unsightly eyesore was created across the valley.

The National Park has now started enforcement proceedings to have the road removed and the land restored. 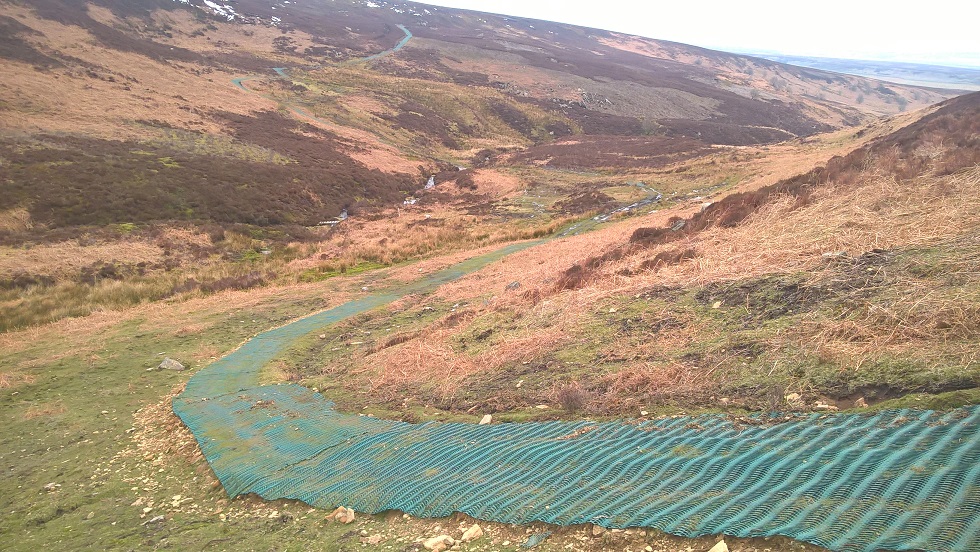 Natural England paid for this track via High Level Stewardship grants, this is public money, in other words you and I paid for it.  Anyone care to submit an FOI to find out how much of our money was spent here? And of course this is now even more relevant – the question is how much of our money was wasted here? The track is located in the Stocksbridge and Penistone constituency where Angela Smith is MP. Wouldn’t it have been great if Angela had been able to raise these questions in the Westminster Hall debate last year?

At Strines vehicles had been damaging protected blanket bog over a decade as this Google Earth image shows. The route that was eventually surfaced is the right hand line and you can see some of the logs that were placed in the worst sections. Once again why was the landowner not told to stop the damage to this protected environment?

You and I have now paid for the damage of the parallel routes to be repaired as part of a moorland restoration scheme. The surfaced road changes the whole landscape here. In this case the surfaced route was funded and built by the landowner. 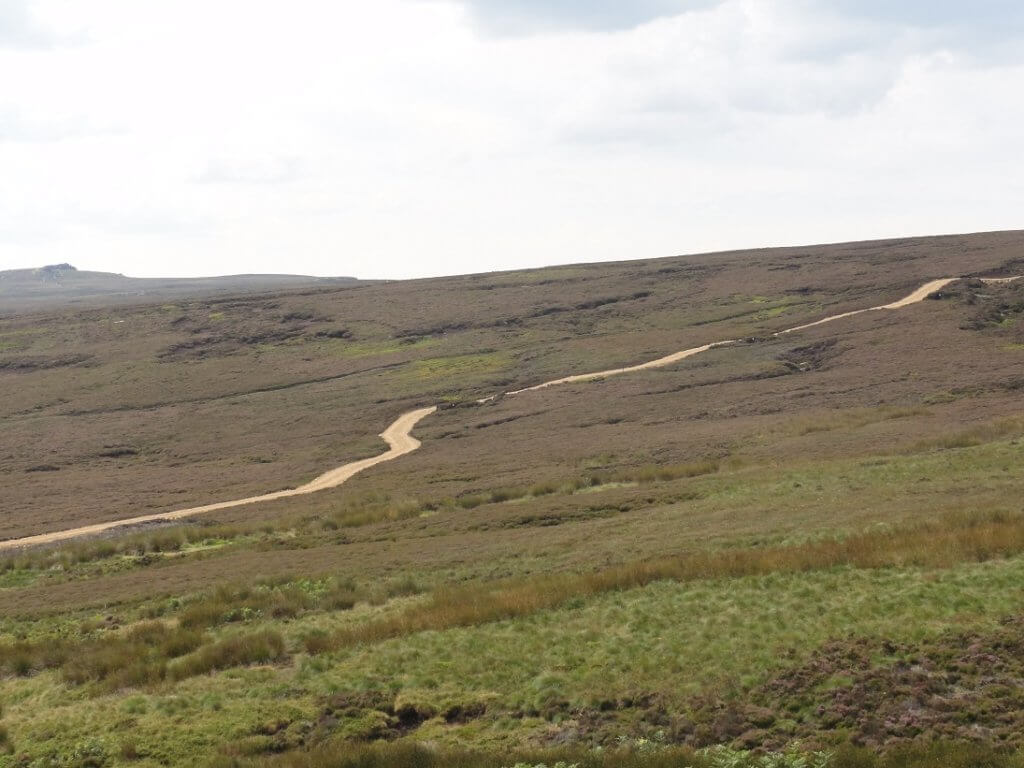 Natural England’s own research paper (NEER002 The Impact of tracks on the integrity & hydrological function of blanket peat) defines this construction as a Heavy Duty floating road (gravel on logs or bare peat). A massive amount of stone has been used, up to 1 metre depth in places with a likely density of about 1 tonne per metre of track and total stone of around 1000 tonnes used over 1 km. 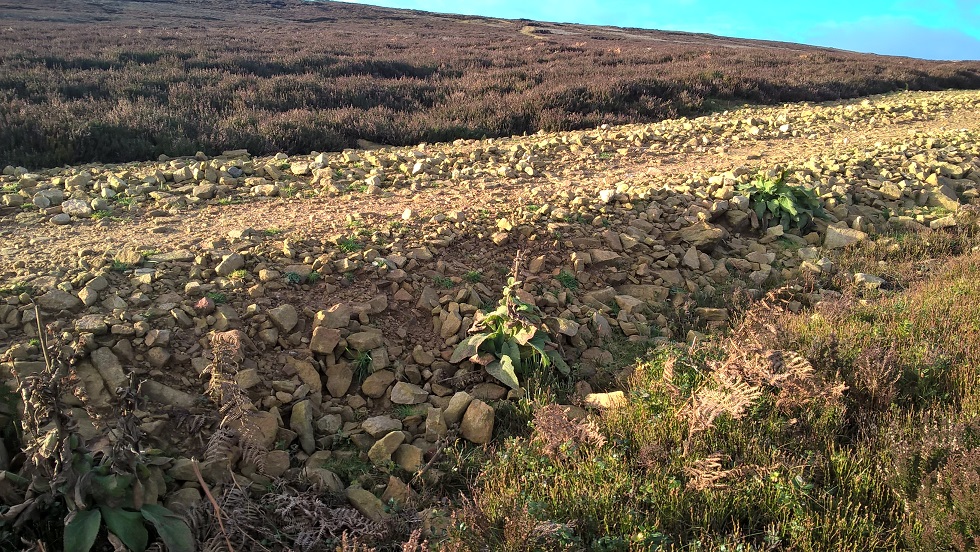 Compacted gravel and the compacted peat underneath inevitably change the hydrology of the blanket bog, acting as a barrier to the normal underground permeation of water. Blanket bog is our most precious habitat. Millions are being spent to make the moors wetter and to try to encourage more sphagnum and environments that will start to regenerate peat instead of seeing it all being washed away. 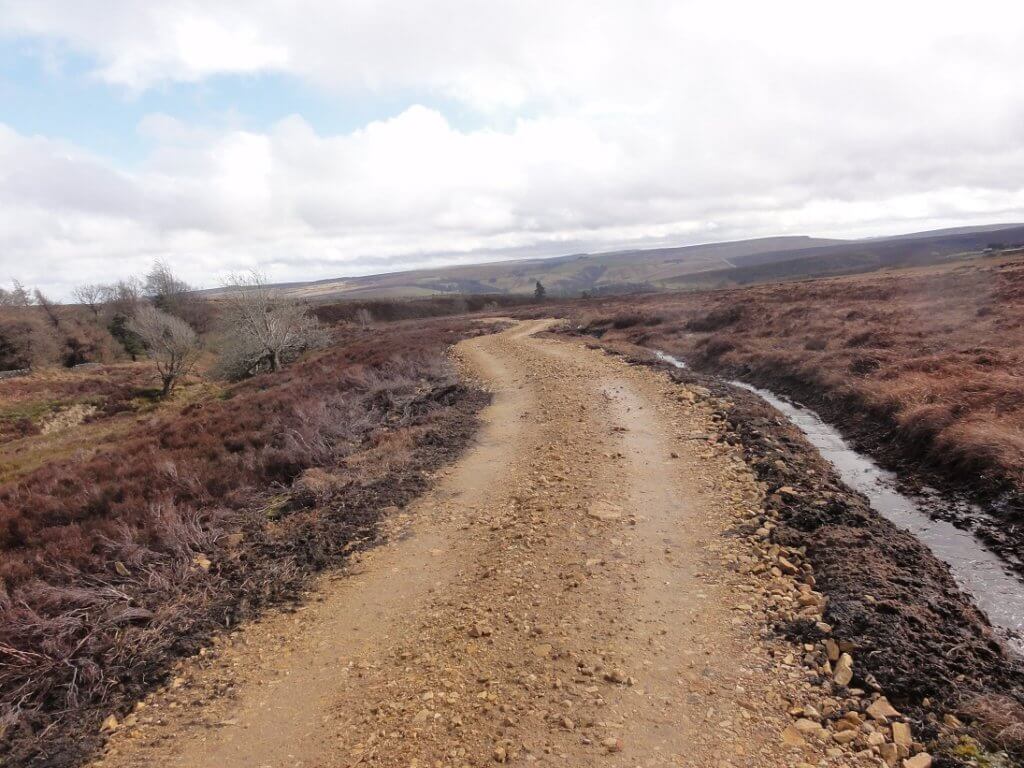 Why is this road still here when it permanently damages this precious landscape? The only action Natural England have taken is to partially block the drain at the side, but even that’s dodgy as there are a series of pipes under the road with entry/exit concealed under flat rocks. If these drains were blocked, the road would be washed away.

With a lot of work and help from Nick Clegg I have managed to get NE to start talking to the National Park about getting the road removed. It’s quite likely this will result in a public enquiry and given the Walshaw experience, who knows how that will end?

Just as the peat is being eroded from our moors, this intensive grouse moor management is eroding the communal value of this rare environment.

To be continued later this week.