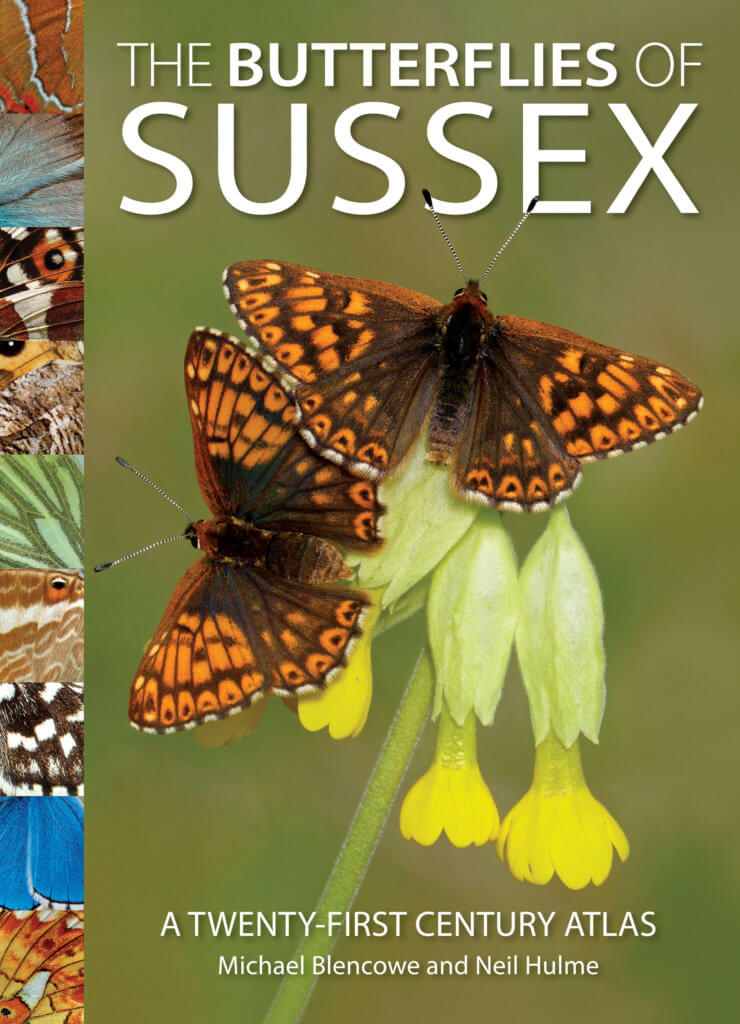 This is a superb book and of interest to a much wider audience than those who are lucky enough to live in the butterfly-rich county of Sussex. The photographs are wonderful, the text is interesting, the graphics are intelligible and the data are voluminous.  Everyone involved with this book deserves to feel proud; and to them we should all be grateful.  The book deserves its subtitle of a twenty-first century atlas as it sets the standard for any to come from other areas in future. The bar has been set very high indeed.

The atlas has been produced by the Sussex Branch of Butterfly Conservation as a result of their 5-year (2010-2014) county atlas project and is the first book for over 20 years  to document the county’s butterflies. And Sussex has butterflies – lots of them! This book covers 53 of the UK’s 70+ butterfly species including such county specialities as the Long-tailed Blue and Duke of Burgundy. But it’s also a handy reference book for commoner species and a source of information and stories about more familiar species.  Because there are only around 50 species to cover there is space to tell some stories, take some interesting diversions and to spell things out. The average county bird atlas has around four times the number of species with which to deal and that probably cramps the style of some of them.

The Long-tailed Blue has been a very rare immigrant to the UK, with significant numbers being recorded only in 1945 and 1990 in recent (-ish) history but this ‘enthusiastic traveller, with a well-documented ability to cross seas’ was seen in Sussex in late summer in both 2013 and 2015 and those individuals arriving in August laid eggs and produced Sussex-bred Long-tailed Blues through September, October and even into November.  The authors believe that there is growing evidence of females migrating south after mating and this suggests that climate change is making southern England the northern edge of the species’ ‘natural’ range.

The Duke of Burgundy butterfly, which I was shown by one of the authors of this book last week, is a conservation success story.  By the mid 1980s it had disappeared from large parts of Sussex and in 2003 the county could muster only eight records. Thanks to improved habitat management (more of it in some places, and less of it in others), the population is increasing and spreading and more than 1000 individuals will now be seen in the best seasons and there is no reason why numbers should not continue to increase and recover. These butterfly people in Sussex not only enthuse about their butterflies, and monitor their numbers but they also get stuck in and do hard management work to improve their fortunes.

As an example of the value of this book, it contains an interesting account of the value of the Defra ‘Nature Improvement Area’ initiative (of which I have always been pretty sceptical) in helping this species and others.

This book is a joy to hold, to look at and to read.

The Butterflies of Sussex: a twenty-first century atlas by Michael Blencowe and Neil Hulme is published by Pisces Publications (which is an imprint of Nature Bureau).