On Tuesday I drove from my home in east Northants to Manchester – via the South Downs at Heyshott. Not the most direct route, I know, but it was worth it.

I spent the morning with Neil Hulme who is Butterfly Conservation’s Fritillaries for the Future officer. I was snapping up the chance to be shown Duke of Burgundy butterflies (aka Duke of Burgundy Fritillary although they aren’t really fritillaries at all (but then they aren’t really Dukes either and they aren’t from Burgundy)).  The Duke of Burgundy belongs to the group of butterflies known as Metalmarks.  Readers of this blog with a good memory might remember that I have tried and failed to see Dukes in the UK on several occasions – I was at the right places, at the right times of year but in the wrong weather conditions eg here, here and here) and I’ve only ever seen this beautiful little butterfly on the continent.

But now I was with an expert, and as well as being an expert Neil is very good company. I like butterfly people – they are, it seems to me, rather nicer on average than birders – I wonder why that is?

Anyway, Neil was confidently promising me Dukes today and, not to make too much of a meal of this story, he delivered!  Not only did we have scores of sightings of this beautiful butterfly but I learned lots about it and about other butterflies, and I liked that.

Did you know that male Dukes have a sort of lekking system? Neither did I. They tend to gather together in warm hollows of their generally north-facing sites, and have sky-soaring battles in the air until a female arrives?

And did you know that unlike other chalk grassland butterflies, Dukes don’t want rabbit-grazed grass stretching away as far as the eye can see? They like scruffiness, and a slightly neglected-looking site with plenty of bushes suits them just fine; like the one pictured below.

And did you know, that although females Dukes (I guess Duchesses) have six legs, as one might expect, the males have only four: the front pair being reduced to vestigial structures? The females, like the one above, need a full complement of legs so that they can hang on tight to the upper surface of the leaves of Cowslips while bending their abdomen round to the under surface to lay an egg there. And that the egg is not laid on the leaf edge just in case a slug or snail starts grazing the leaf edge?

And did you know that the males rarely feed in their brief lives of just a few days?

And, and and… there’s lots more.

Over five years ago I wrote of Dukes as a species that is in real trouble in the UK (see here), and they still need a lot of our help, but on the South Downs at least (and let’s hope thanks to many of you supporting this crowd-funder, on the North York Moors too) they are doing well. Populations are increasing and the populations are spreading out to recolonise old sites.

The detour was well worth it!  And I’m glad that many times when I buy a train ticket or book a hotel I am donating through Give as You Live to Butterfly Conservation‘s excellent work. 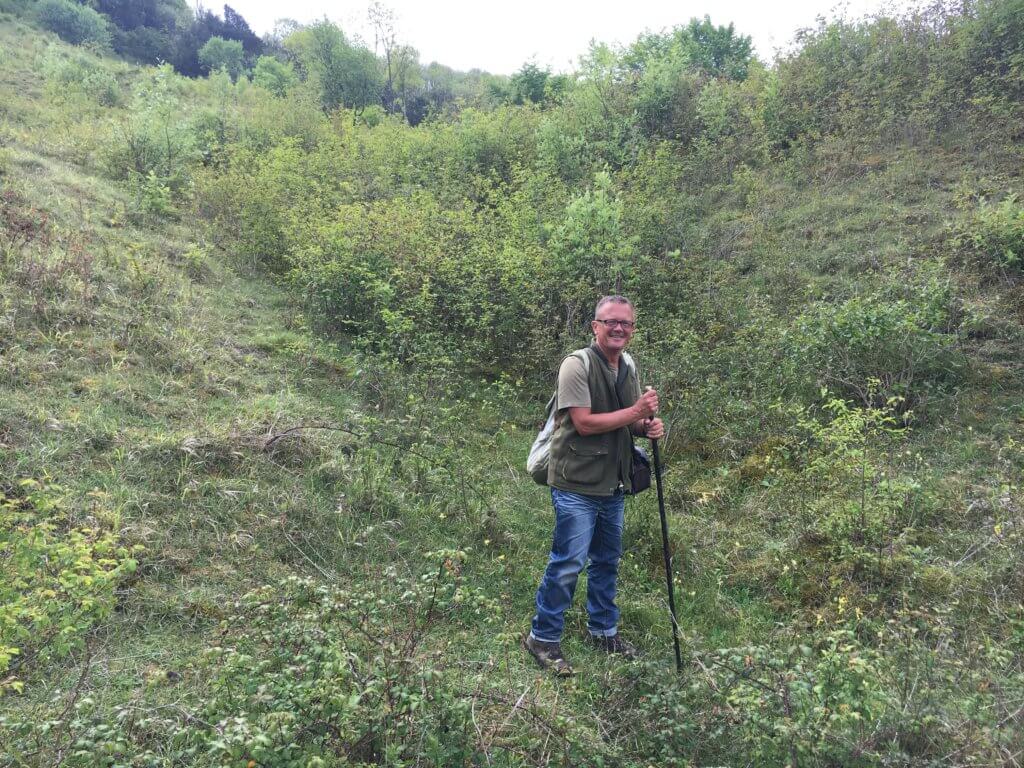