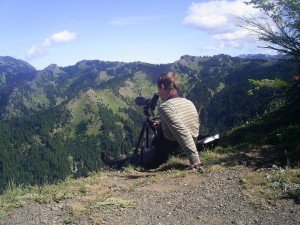 Ian Carter has worked as an ornithologist for more than 25 years. He was involved with the Red Kite reintroduction programme in England and has a keen interest in the conservation of raptors, bird reintroductions and wildlife management more generally. He is particularly interested in human attitudes towards wildlife and the complex ways in which they interact with science.

The recent hostility towards this proposal from conservationists surprises me. I had a very limited involvement in helping to progress the project when at Natural England but I can take a more detached view now and I think it has a lot going for it.

Firstly, take out all the politics (just for a minute) and there is the obvious direct benefit to the conservation status of the Hen Harrier. If it were to work (and I think it would have a pretty good chance) there would be a new population, well away from the worst excesses of persecution in the uplands. It’s inevitable that, as with reintroduced Red Kites and Sea Eagles, there will be some persecution, both in the release area and for young birds that wander to the uplands. The judgement is surely not whether persecution has been eliminated entirely (as suggested by RSPB in their recent statement) but whether persecution levels would be sufficiently high to prevent a new population from becoming established. The complete elimination of illegal persecution was not a requirement for reintroductions involving Red Kites and Sea Eagles and nor should it be for a project involving Hen Harriers. I think it very likely that for Hen Harriers released in the south, well away from grouse moors, persecution would not be sufficient to prevent the project from achieving its aims.

The argument that not everything has yet been done to help birds in the uplands has also been used. I would suggest that pretty much everything within the power of conservationists has been tried and proven unsuccessful. It is simply too difficult at the current time to detect and prevent persecution in the uplands. RSPB, raptor groups, Natural England and others have all invested considerable time and effort on this issue but in the vast expanses of these remote upland estates, keepers are able to continue to get away with routine persecution. Government, estate managers and perhaps also the Police could do more but that, as we have seen, is beyond the control of those who wish the help the Hen Harrier.

The RSPB statement that reintroduction should only be considered when natural recolonization is not possible through other measures is unexpected, to say the least, given their involvement in other reintroductions involving species with existing and expanding populations in Britain. If the argument applies to Hen Harriers then should it not also apply to Cranes, Kites and Cirl Buntings? The last species, for example, could spread quite happily if agricultural practices surrounding its existing range in south Devon were less intensive. That is beyond the control of RSPB and others so reintroduction to Cornwall was deemed to be the only practical way to improve its conservation status – and fair enough too, it’s an excellent project. It’s interesting to reflect that Natural England were not at all keen on the Crane reintroduction for just the reasons now being put forward by RSPB in relation to Hen Harriers – natural recolonisation should be given every chance first. The difference is that natural colonisation of southern England was already starting to happen with Cranes but seems unlikely at the current time for the Hen Harrier despite the occasional isolated breeding attempt.

Another argument used by opponents of reintroduction is that it would serve only to distract attention away from the situation in the uplands. I don’t buy that for one minute. If it’s successful then there will be a new, expanding population of Hen Harriers in England and while many of the young will remain in southern England and recruit into the new population, some will wander. As the population expands, more and more young will be produced and that will make it increasingly hard for those who do not wish to ‘let them in’ to the uplands. It will be especially hard given that many of the young birds are likely to be carrying technology that is improving all the time and will soon allow birds to be followed in close to real time. If, despite this, estate managers do succeed in keeping them out, there will be an increasingly stark contrast between what can be achieved away from grouse moors and what people visiting grouse moors still have to put up with. The old chestnut about Hen Harriers being limited by disturbance from birdwatchers and by ground predators will be found out for what it is – nothing but spin.

I can certainly understand why shooting and landowning interests would want to scupper this project and my guess is this is exactly what will happen. Vocal opposition stymied the proposed Sea Eagle project in East Anglia and there are already signs that it is there, waiting in the wings, for this proposal. Conservationists can help make it easier for them but I’m not sure that would be a wise thing to do.