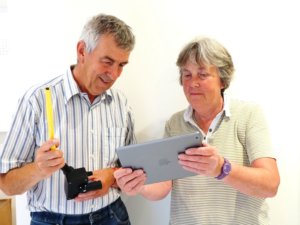 Ken and Linda Smith are both retired and now live in Chichester, West Sussex having moved from Hertfordshire last year. Before their retirements, Linda was a senior civil servant with Defra and Ken a research scientist with the RSPB. Ken has always been heavily involved with local birding and recording through the Herts Bird Club, bird ringing and the BTO.

Having studied woodpeckers, largely in their own time, for more than 30 years Ken and Linda realised that, with a little help and encouragement, birdwatchers could make a big contribution to understanding the causes of the decline of the Lesser Spotted Woodpecker and monitoring the remaining populations – so in 2015 they launched the Lesser Spotted Woodpecker initiative.

The Lesser Spotted Woodpecker is a rapidly declining species which was added to red list of Birds of Conservation Concern in 2009. Research by the RSPB between 2005 and 2009 found that low breeding success was an issue but the reasons for this were not entirely clear nor were there many suggestions of what could be done the improve the situation.

Lesser spots are extremely challenging birds to study. For much of the year they are virtually invisible only becoming detectable in early spring when they drum and display. Normally only a few nests are reported to the BTO Nest Record Scheme each year and, because of the difficulties of inspecting lesser spot nests high in fragile dead trees, only limited data on breeding success data are collected. The dedicated RSPB studies resulted in about a dozen nests being recorded each year but after the studies were stopped (understandable given the high cost and the many competing priorities) numbers fell back again.

Given that low breeding success was the key hypothesis for the decline of the species Linda and I started an initiative to encourage nest recording of lesser spots in 2015. Using our experience and nest inspection equipment developed over 30+ years of studying woodpeckers we offered to help observers record their lesser spot nests. In the three years since we started the project we have recorded 28 nests with good data on the breeding success for the majority. We have purchased additional nest inspection camera systems so we are now able to lend them out to observers to allow them to collect their own data. In 2017, we launched a website (www.woodpecker-network.org.uk) which has increased the profile of the project and allowed wide feedback of the results.

On the way, we have learned a great deal about lesser spots and how to go about studying them and a few people have become hooked by the challenge of studying them. Many of these tips can be found on our website together with yearly reports.

We have found the breeding success to be variable from year to year – 2015 and 2017 were good whilst 2016 was very poor. Lesser spots do tend to occur in well wooded landscapes but they don’t necessarily nest in large woodland blocks. Many of the nests have been found near to edges or in small woods not frequently visited by bird watchers.

We have already started to experiment with ideas like providing supplementary food to improve breeding success. Although lesser spots do not regularly visit garden feeders (in contrast to the larger great spot), at two of the regular lesser spot nesting sites the adults have been seen collecting food from fat feeders. If we can find a way of getting lesser spots to take supplementary food we may be able to improve breeding success but will also learn a great deal about the ecological drivers.

Lesser spots are now well into their quiet phase. They are still around but more or less invisible until February and March next year. Why not take up the challenge of following your local lesser spots through to nesting? We will be happy to help all we can.