I wrote to my MP on the subject of lead ammunition back in August.

I’m grateful to my MP, Tom Pursglove, for forwarding my letter to Defra and now for sending me the following reply from the Parliamentary Under Secretary, Therese Coffey, as follows; 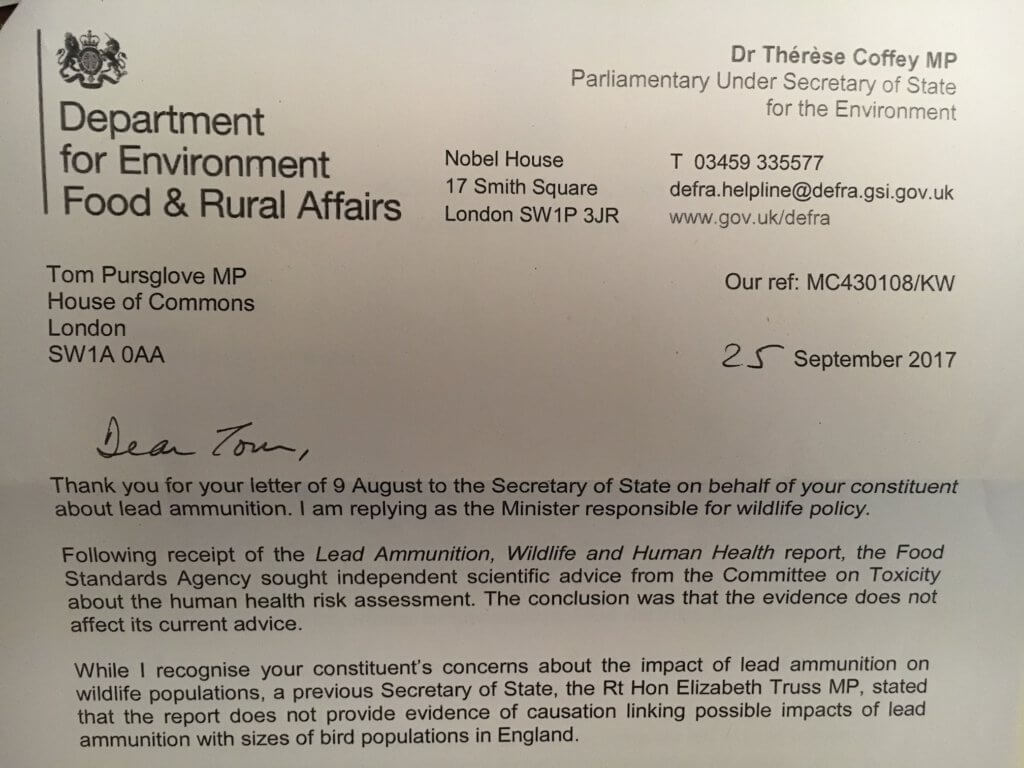 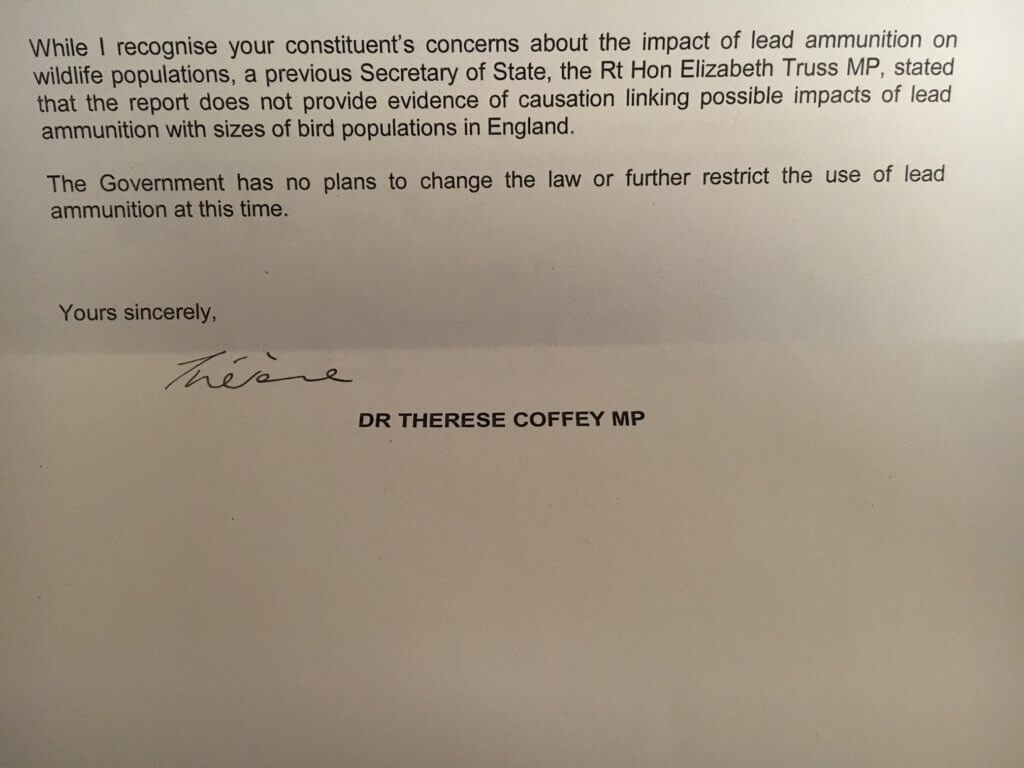 My response to Mr Pursglove is already on its way through the ether as follows:

I am grateful to you for forwarding my letter on the subject of lead ammunition to Defra and for sending the reply by the Parliamentary Under Secretary, Therese Coffey, back to me. Her response, though, is pure sophistry so I would be grateful if you could please send this letter back to her for a proper, less evasive, response.

There are two matters here. The first is that the FSA’s advice on lead consumption, which presumably the government would like us to heed, is as useful as a road sign warning of a dangerous bend which is hidden behind a hedge – nobody sees it or reacts to it.  What steps, on this public health matter, is the government going to take to ensure that the FSA advice is heeded? To remind you and Dr Coffey (who as a scientist ought to know better), the FSA advice includes the words ‘…people who frequently eat lead-shot game, particularly small game, should cut down their consumption. This is especially important for vulnerable groups such as toddlers and children, pregnant women and women trying for a baby, as exposure to lead can harm the developing brain and nervous system.’ and ‘There is no agreed safe level for lead intake. Independent scientific expert groups across the European Union advise that exposure to lead should be reduced as far as possible.‘.

Dr Coffey is strictly correct about what the former Secretary of State for Defra, Liz Truss, said in her letter to the Lead Ammunition Group about the content of their report but at the time she knew (or should have known), and Defra certainly knew that there is good scientific evidence for a population impact of ingested lead on waterfowl populations. This is the scientific paper which provides that evidence http://onlinelibrary.wiley.com/doi/10.1111/ibi.12400/abstract .

The government’s position on this matter is hopelessly adrift from the science – and we are talking about matters of public and environmental health.  That’s why I quoted, in my earlier letter, the remarks of Michael Gove as follows ‘environmental policy also needs to be rooted, always and everywhere, in science.’ and ‘But it is only by adherence to scientific method, through recognising the vital importance of testing and re-testing hypotheses in the face of new evidence, through scrupulous adherence to empirical reasoning, that we can be certain our policies are the best contemporary answer to the eternal questions of how we live well and honour the world we have inherited and must pass on to our children‘.

Mr Pursglove, I’m sure I won’t be able to tempt you into any comment on this matter but may I suggest that your covering note when you send this letter on to Defra ought to say something like this:

Dear Therese, I know that your former boss, Liz Truss got us all into this mess but she can’t get us out of it now. My constituent Dr Avery isn’t going to go away and nor will this issue. Your response makes you, Defra, the government and the Conservative Party look foolish and as an MP in a marginal constituency you aren’t doing my electability any good by taking this line on a subject which is of little interest to all but a few.  And that’s the trouble, how can our party pretend to represent the many when we are defending the use of toxic ammunition solely because a few of our own supporters shout loudly, and unscientifically, about it? Come off it, best wishes Tom.

29 Replies to “Reply on lead ammunition from Therese Coffey”