This is Ian’s seventh Guest Blog here and you can access all of them through the Guest Blog Archive – click here.

This isn’t about being me being colour blind.  This is about Red Deer, an animal that has never looked particularly red to me at all, but then, is that my vision or perhaps it is because our Red Deer are not as Red as they used to be?

Red Deer are possibly the most iconic mammal in the British Isles, this may well have something to do with the fact that other contenders (Lynx, Wolf and Bear etc) have been wiped out long ago, but it also has to do with their majestic appearance, a large stag during the rut is an impressive animal wherever you are in the world.

This majesty is widely used by businesses and tourism throughout the areas of Britain where these large mammals roam – Pubs, Hotels, B&Bs, Leisure businesses of all description and even the makers of alcoholic beverages, readily use the image or name of a Red deer to promote their venture. But, perhaps like some of the drinks, is this image becoming diluted?

The Red Deer is found across Europe, its range also heading eastwards well into Asia and it is the only species of Deer found (naturally) on the African continent with populations in countries such as Morocco and Algeria.  It is closely related to 2 other species found in the northern latitudes, the Wapiti of North America (known as Elk in the Americas) and the Sika of eastern Asia.  In Britain, it is to be found in scattered populations from Cornwall through to the Scottish Highlands, it is surprisingly widely distributed across the whole of the country, although watching wildlife programs can give the impression that it is only found in Scotland… 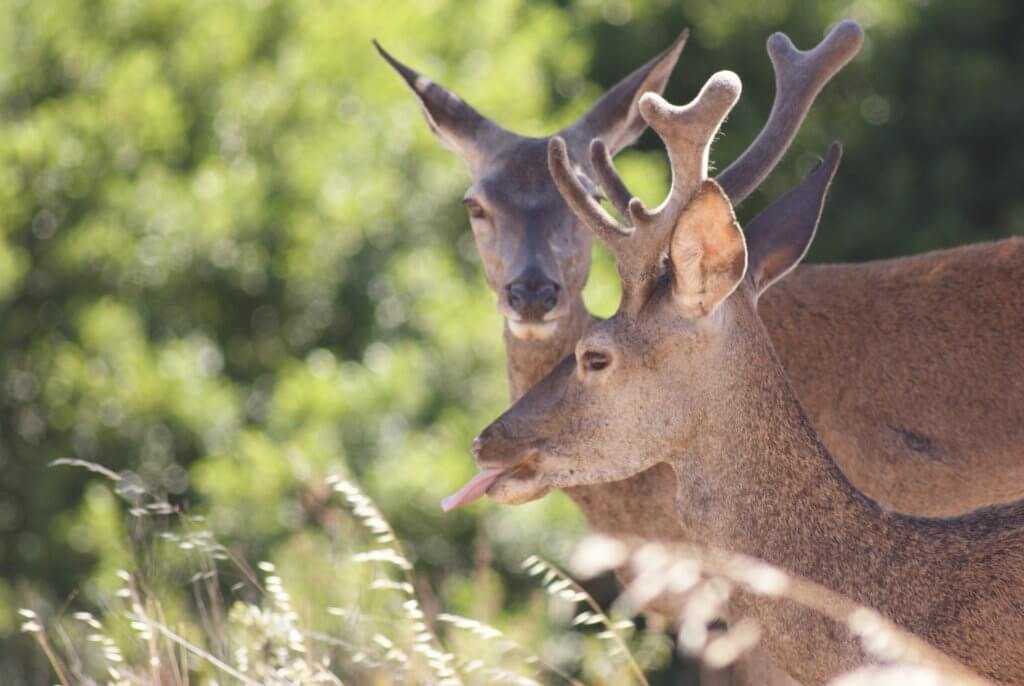 In Devon, where I am from, the Red is actually a very common mammal, being found not just on the high ground of Dartmoor and Exmoor but pretty much across the whole of the northern half of the county, as well as across the central belt right up to the western and northern fringes of the city of Exeter.

Deer in Britain are positively thriving (and having a huge impact on habitat structure), but it is not just our native species of Red and Roe that are doing well, others that we have introduced are also doing very well indeed. One of these is the already mentioned Sika Deer. Sika were introduced into Britain at various locations between 1860 and the outbreak of the World War 1, many of these introductions were successful and Sika are now found in scattered, but increasing, populations across southern England, north west England and in Scotland.

Sika and Red are closely related enough to each other to produce fertile hybrids and this is a huge problem for our native Red Deer population. Surprisingly, this fact seems to be little known, even amongst naturalists, yet it is something that has actually been long known about; the first confirmed hybrid stag was reported (and killed) in 1940 and in 2009 a report in the Journal of Molecular Biology stated that as many as 40% of some populations of mainland Scotland’s Red Deer are actually hybrids.  Forty percent.

In southern England the extent of the problem is little known. I have spoken to several people on the subject and have often been told that it is not an issue.  Now being the questioning sort, I have asked why it is not an issue, expecting some reassuring scientific data, but instead, the only answer I got is that ‘it doesn’t happen here’. Wow, that is an amazing biological fact; Sika deer in Scotland have sex with Red deer in Scotland, but don’t have sex with one another in England. Perhaps it is the weather? Or maybe English Red Deer are more choosy than their Scottish counter parts? What utter tosh.  The simple fact is that Sika are hybridising with Red in England, yet we don’t seem to be that worried about it.

The biggest population of Sika in southern England is centred around the Purbecks in Dorset, but these animals have spread north and west and are now found in parts of Devon as well as other parts of Dorset.  In neighbouring Hampshire there is an established herd of Sika running free with the herd of Red that are also there.  I have been told by those in the know in the New Forest that there are hybrids, but only a low number, but for me a low number is a worrying number. It is worth noting that until the Scottish study in 2009, it was thought that the incidence of hybridisation in Scotland was also low…

Deer can travel surprisingly large distances, especially during the rut. I can remember whilst working on the Dorset/Hants border the story of a Red stag in the New Forest that would disappear before the rut and then reappear shortly after it, doing so for a number of years.  No one knew where it was going, but the stag did. Every year it would travel over 100 miles across major rivers and roads, including the A303 and the M5 to join the rut in the Quantocks in northern Somerset.  Sika stags also travel long distances.

The Haldon ridge just south of Exeter is home to a huge number of Fallow Deer and also a fair few Roe Deer, I was a Ranger there for many years and although there were no Red there, we would be visited every October (Red, Sika and Fallow rut during this month) by at least 1, and sometimes 2 or 3, Sika stags.  We always knew when they were there, because we would have a succession of early morning joggers, dog walkers and cyclists reporting blood curdling screams coming from the shadowy depths of the conifers (one person was even convinced that there were Banshees living in the forest!), these screams were actually the calls of the Sika stags and it is certainly an amazing sound. The thing was, we never knew where these stags came from (they could have come from the Purbecks?), they weren’t present for the rest of the year, they were travellers, appearing for a short few weeks before vanishing once again.  Red Deer are present in good numbers just to the north of Haldon between Exeter and the town of Crediton and these in turn are linked in with Red on Dartmoor and around Okehampton, it is highly likely that the Sika we were seeing (and hearing!) on Haldon were joining up with these deer, if so, then that could have led to at least some cases of hybridisation.

In amongst the central Dartmoor herd of Red Deer in around 2010 there was a young stag and female (hind) that exhibited signs of hybridisation with Sika Deer. They were both of breeding age and would have likely bred in the preceding rut, meaning that the dilution of this herd of iconic Red Deer was already underway.  Not all hybrids are going to exhibit obvious physical signs of their status though (how many ‘Scottish Wildcats’ turn out to be pure when their DNA is sampled for example?), so just because two animals did, it doesn’t mean that these were the only hybrids present.

Although reading this may be a surprise to many of you, don’t think that this issue isn’t known about.  Legislation has long been in place banning the movement of Red and Sika deer from mainland Scotland to the islands of Scotland where Red are already present. This was put in place by the government to protect the island deer from hybridisation, so DEFRA know all about the threat of hybridisation to our native Red Deer.  Obviously therefore they will have a plan in place for England.  Oh wait, no they don’t. (Regular readers of Mark’s site will not be surprised at that!)

In England, deer management is down to individual landowners, some cull deer, some don’t. Some trophy shoot males and leave females, some just cull females to reduce populations and others actively encourage them to increase with supplementary feeding. There is no co-ordinated strategy for the management of deer (and this opens the door to all sorts of tangents that I am resisting, not least restoration of habitats, rewilding etc…) but there should be.  Maybe I am being all doom-mongery about the extent of Red and Sika hybridisation in England, but then again maybe I’m not. The thing is, if we continue to do nothing to check, then every October that passes is perhaps another generation where our Reds become less Red

11 Replies to “Guest blog – Just how red are Reds? by Ian Parsons”