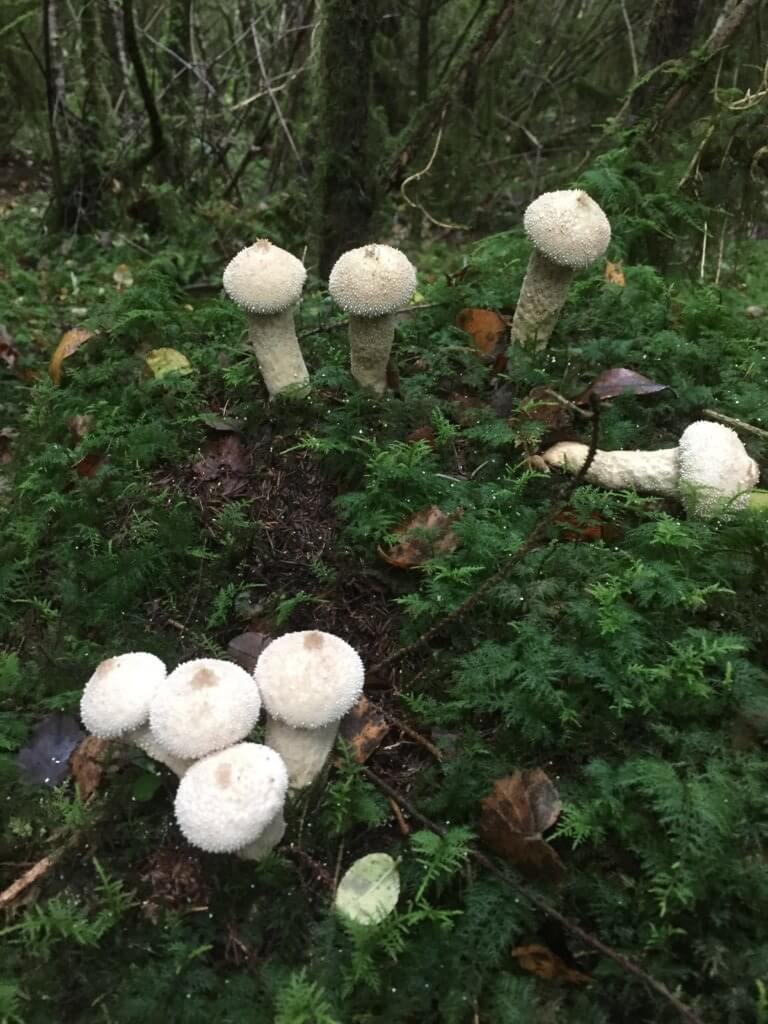 There are a few different puffball species, ranging in size from the small, spiny, Common Puffball (the one in the photo) and its close relatives, to the altogether more impressive and aptly-named Giant Puffball. The stalks are often mostly hidden underground, though, as here, they can extend to several centimetres. The good news is that all the similar looking species are edible so the subtle differences between them aren’t worth worrying about – unless you enjoy worrying about such things. Do, though, watch out for the superficially similar earth-balls which have tougher, thicker, scaly skins and an off-white flesh, even when young.

The smaller puffballs are very common and whilst they are not the tastiest of wild fungi they are still more than a match for most shop-bought options. They are only good to eat when young, whilst the flesh inside is still pure white. As they mature and the spores ripen, the flesh dries out and starts to yellow, eventually reaching the final ‘puffing’ phase which gives them their name. These are the familiar brown papery structures that children (and adults) can’t resist stamping on to send a dark puff of spores shooting into the air. It might seem a bit mindless but it’s helping to secure the future of the species so don’t feel bad about it. If an accommodating human doesn’t find them, no doubt passing animals or even drops of rain are enough to do the job.

If you find a promising group of puffballs it’s worth cutting one open in the field just to check that it is still young enough to eat. That avoids the risk of harvesting a batch only to find, once you get home, that they are past their best. If you have the patience, it’s worth peeling off the outer skins before cooking as they are much tougher than the flesh inside and a little too chewy for the more discerning of palates.