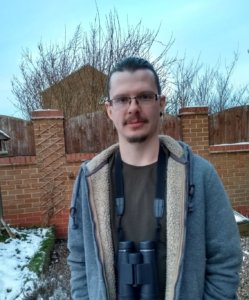 Gavin Gamble is a thirty-something Naturalist, Environmentalist and occasional ink-slinger currently studying Natural Biology and Environmental Science with the Open University alongside full time employment. He is also the author of the latest petition to ban driven grouse shooting from our uplands.

I suspect many of Mark’s regular readers readers will by now know my name but very little more than that, so Mark has kindly invited me to share a little more about myself – probably more than he bargained for!

I have been, what I would describe, as a casual naturalist since I was old enough to walk; I grew up in the South Leicestershire suburbs just a stone’s throw from open countryside and spent much of my youth mucking around in woods, fields and farmland getting acquainted with all things that walk, wriggle and fly. I was a sociable youngster but also very content in my own company or more importantly, the company of the natural world and that connection with nature and wildlife has remained perhaps the one constant in my life. A life-long passion for birds, invertebrates and plants has seemingly kept me on the relative straight and narrow.

Of course school, friendships and dare I say girls provided plenty of distraction and there were undoubtedly patches where the woods were less appealing than the shenanigans of teenage life. This soon rolled into the discovery of pubs and clubs and I could have so easily lost touch with the natural world that I had held so dear as a child – in fact it’s sad to say that this is a common trend; our innocent selves start out with such good intentions, such open minds and a typical curiosity of the world around us only to dissipate with age as a ‘real life’ of jobs, bills and responsibility kick in. For myself, with age came a whole host of insecurities and social anxieties that I had only recognised in passing as I was growing up, something ‘different’ that I couldn’t quite put a finger on. These anxieties I have do play a significant role in my life, but they are something I am learning to live with and indeed something that the natural world has helped me unshackle from.

When, In late 2015 my wife and I discovered that we were going to struggle to have children and in early 2016 when our cycle of IVF failed, I (or we – my wife is a passionate Environmentalist too) were left bereft and at a cross roads. I retreated back to the one place I knew I could find solace – the natural world. I spent a long time getting to know my local edgeland like the back of my hand, discovering and rediscovering its inhabitants and the time spent surrounded by these daily wonders began to heal any open wounds I had. Since those dark days it has been essential to look upon the world with fresh eyes, to re-evaluate what is important, what our strengths are, where our enjoyment can be found and where our energies can be placed. It became obvious that we should put our time into the environment, into the natural world and it is this conviction that drives much of our daily lives now. We are both now vegan, we campaign in various ways on environmental issues and I have decided to take the leap into turning the things I enjoy into my career by studying with the Open University. Amongst many other things, it is the nightly light-trapping of moths and the recording of data for the Leicestershire county recorder, Adrian Russell, that has taken much of my recent attention whilst my other constant love is writing – it has been satisfying to merge the love of writing with a kinship to the natural world through various blogs, local and national publications. (You can read my latest offering in the January issue of Countryman magazine).

So, what of driven grouse shooting? Well, It’s fair to say that I am a latecomer to the debate. In 2013 I started the Leicestershire Raven Survey, charting the rise of breeding Ravens in Leicestershire after a long absence. They are undoubtedly my favourite bird and whilst researching Corvus corax there were plenty of alarming statistics thrown up. Like many, I had pictured the Raven as an ‘upland’ bird and whilst Raven strongholds in the UK mainly exist in uplands and craggy coastal spots I was soon aware that this hadn’t always been the case. Ravens once covered the length and breadth of Britain but persecution by farmers who (wrongly) blamed them for killing lambs drove them to the extremities of the UK. Only now are they recolonising the middle Counties and lowland countryside. My research on Ravens led me back to the uplands and this is where I first learnt of their continued persecution, mainly on Grouse moors.

It wasn’t until I read Mark’s book, Inglorious, that the scale of persecution of a vast array of wildlife in the uplands became apparent to me. The persistent culling of mountain hare, the degradation of habitat and of course the almost extinction of Hen Harriers, especially in England came as something of a shock. I hadn’t imagined such wanton destruction of wildlife rearing its ugly head on my own doorstep. Delving further into the environmental impact, the water treatment issues, the flood-risks, the mismanagement of an internationally important carbon store in the form of upland peat, well, It all left me feeling at a loss, ashamed perhaps. I don’t live in the uplands, though I’ve spent time in the Peak District, and so to many it may seem strange for a lowland Leicestershire lad to feel so strongly for an upland issue but that is kind of the point – this is a British issue, it has repercussions for all of us in the long term and of course, courtesy of our taxes, we are all paying for it too.

I started the petition knowing that Mark’s before me had been a roaring success, signatories wise at very least but also knowing that the debate that followed in parliament hadn’t quite matched the expectations we all had. There is no quick fix and of course the battle has been raging now for decades but with the shooting lobby and pro-driven grouse shooting community almost declaring victory post-debate, it felt important to me, if nothing else, to keep the momentum going and to keep the debate in the public and political eye. We couldn’t afford for the last debate to simply be the end of the line. I am aware that not everybody on our side of the argument is best pleased with my willingness to launch another petition so soon and I can easily understand their concerns; Is it too soon? Maybe. Will failure to secure a second debate hurt the cause? Maybe. If anything less than 123,000 signatures this time around gives the pro-grouse shooting lobby something to shout about, then that is purely a measure of what they consider success. It’s a pretty weak measure – that alone tells me enough really.

So what about licensing? Well, it is clear I’ve taken a hard-line approach – after many decades of talking and gathering around tables little progress is being made, not least by some of the large NGOs. Can we really afford to dither much longer? With growing evidence of continued illegal raptor persecution, a refusal to shift position from moor owners and those that govern them are we really left with much option but to call for an outright ban? In my view, probably not. That isn’t to say I’m not in support of licensing, because I am. It would at least be a step in the right direction and with the RSPB seemingly willing to discuss the licensing option at least that would add some clout (though I’d much prefer the RSPB, at now the fourth time of asking, to back a ban or perhaps even just discuss it with it’s membership). The trouble I have is that raptor persecution is already illegal, prosecutions are pretty much non-existent and evidence gathering is a logistical nightmare so would licensing change any of that? By who and how would the licences be enforced and with what budget? Would the eyes be in the right places? What are the loopholes? So many questions on licensing are still unanswered but in the interim, do I back it? Yes. I suppose I do.

There are signs of renewed hope. Each year, Hen Harrier Day is gaining more traction, more popularity and more exposure. With the recent Scottish petition now securing a study into the full economic impacts of driven grouse shooting and with the SNP adopting a policy supporting the licensing of driven grouse shooting things certainly seem to be moving forwards, north of the border at least. It is also encouraging to see the youth are now enthused by the debate, with Findlay Wilde and Dara McAnulty becoming as prominent speakers in the debate as any seasoned veteran naturalist. Raptor persecution continues to make headlines and with each disappearing bird new vigour is thrust into the debate, the stories get more coverage in the national papers and this year BBC Inside-Out even broadcast their own investigation into driven grouse shooting to the television sets of many of us.

The debate, clearly, is still prominent. Can we put an end to illegal raptor persecution in our uplands? Can we halt and reverse upland degradation? Can we secure a better future for our upland wildlife, our upland economy, improve our environmental credentials? I believe we can. I believe it is just a matter of time. As Chris Packham now famously advised: We will win!

I would like to thank Mark for his continued support with the petition and also providing me with a platform to introduce myself (and rant a little) on this blog. I would also like to thank the many, many people who have contacted me with support, suggestions and offered help in a huge variety of ways and who continue to do so unquestionably. Most of all, I thank the 19,000 or so of you who have already added your signatures to the growing campaign, have taken the time to speak out and share your passion for the natural world we all live in.

For those of you yet to sign, I hope I have convinced you to do so. If you would like to add your voice, please sign the petition here.