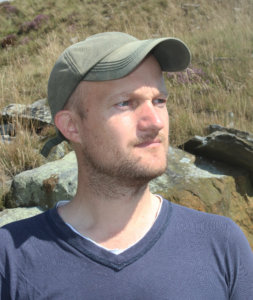 Alex Lees is a lecturer in biodiversity at Manchester Metropolitan University and lives in the Peak District. Twitter: @Alexander_Lees

Towards a wilder future – an end to Peak pessimism?

Story 1. Nearly three decades ago I visited mid Wales on a family holiday. It was a successful quest for Ravens, Peregrines, Red Kites and a break from the monotonous topography around my parent’s home in south Lincolnshire.

Story 2. A quarter of a century ago on the, same glorious spring day, I watched Black Grouse at a lek in the Peak District and saw 5 displaying Goshawks sky-dancing at once.

Story 3. Ten years ago I found myself back in mid Wales doing bird surveys, time away from the UK had changed my perceptions of landscapes and ‘wild places’. The landscape reminded me of what I had seen following deforestation in Brazil – rolling grassy hills full of livestock, broken only by introduced tree plantations, and, here and there, tiny fragmented patches of a once great rainforest.

After years in the Amazon basin, the most biodiverse place on earth, I now find myself living in the Peak District. The Black Grouse are extinct and a sky full of Goshawks is now a distant memory. In our first full summer in the Peaks we failed to see Wood Warbler; none returned to the Goyt Valley. Pied Flycatchers were almost equally scarce. We did see Merlins and Short-eared Owls on balmy summer evenings to the sound of distant Curlew and Golden Plover. But these were all few and far between across barren expanses of heather moorland farmed for Red Grouse. Hours spent in vigils for a few birds. Wood Warblers need not apply.

I live in the Longdendale valley, raptors are typically conspicuous by their absence and the hills above are even barer than those in the Goyt. To paraphrase George Monbiot, who has been instrumental in asking these questions – and proposing solutions – how did we end up in this mess?

According to The Environment Act 1995 the two statutory purposes for national parks in England and Wales is to:

If they meet these goals then they should also:

‘Natural beauty’ is a rather subjective idea, one assumes that human infrastructure like roads, pylons and wind farms disrupting the aesthetics of a natural system is bad, but are happy to accept trade-offs if it means we can cross the country in half an hour rather than five and get greener electricity. But, what about human beings disrupting natural processes and hence natural beauty? Across the whole of upland Britain we kill ecological succession through land management – predominantly burning and overgrazing. A landscape that would be at least partially covered in temperate rainforest, such as Atlantic oakwoods and Caledonian Pineforest with its lush understorey of mosses, ferns and some shrubs is permanently barred from ascendance. That is our terrestrial climax biodiversity home to our real ‘wildlife’ and we are neither conserving nor enhancing it. We are actively persecuting it.

I have personally devoted most of my adult life to understanding the consequences of human change on ecosystems in the tropics. These are landscapes that have entirely changed in decades, knowledge of those forests has not yet slipped from the memory of the people that live there. Yet in the UK we have accepted and even rubber stamped into law with terms like ‘cultural heritage’ what we believe our nominally wild places should look like and the biodiversity that merit the term ‘interest features’. If the Brazilian government celebrated a field of cows, which was once tropical rainforest as a national park it would be met with derision, indeed I have been among the deriders. Yet here we have normalised this, the memory of what the landscape once was has faded, semi-annual degradation is sanctioned. Such widespread cultural acceptance has prevailed for decades.

Spurred on by a growing rewilding movement the environmental hegemony of this vision of the uplands as a homogenous, treeless, low biodiversity ‘un-wilderness’ farmed for sheep and grouse and all at tax payer expense is being challenged. I attended an excellent Derbyshire Wildlife Trust talk by Tim Birch in Glossop last week. He hoped to see Ospreys, Golden Eagles and Hen Harriers in forty years. I challenged him that it was doable in half that time. It took twenty years for Ravens and those other ‘upland species’ to make it back to Lincolnshire though reintroduction and natural recolonization. These generalist predators can get by almost anywhere that has prey and somewhere to nest, they aren’t picky. I have seen Golden Eagles hunting on the edge of Los Angeles and breeding in a landscape that looked like Lincolnshire in southern Sweden. Even Pine Martens may be quicker back than you think. All we need to do is stop persecution. That part is in theory easier.

But, for me the focus on raptors, including Hen Harriers, belies the bigger question – what else do we want? Inspired by the talk I put together a figure for my conservation biology lectures at university. Where do we want to go in an age of rewilding hopes? I want to see more of those threatened forest-associated summer migrants, as well as raptors. The silent cloughs should cascade with Wood Warblers. Wrynecks used to nest in the upper Derwent Valley, where the last pair of Golden Eagles also nested in the region in 1668. Why can’t we have Temminck’s Stints on the edge of tree-lined bogs echoing to the sound of Black Grouse and other breeding waders? Are Capercaillies, which stalked these hills only a few centuries ago a pipe dream? Their remains have been found in Fox Hole Cave in the White Peak alongside Golden Eagle and Black Grouse. Bones of a Little or Baillon’s Crake, hint at great wetlands. We need to embrace the term ‘temperate rainforest’ and make plans to redress historical deforestation with heterogeneous habitat restoration across upland Britain.

The ‘manifesto for avian rewilding’ infographic (above) has been visualised over 140,000 times and counting. It evidently resonates with people. Most have been supportive. Those that disagree seem to converge on two arguments – these can be classified into the ‘what about the waders’ and the ‘what about the local people’ problems. These are valid concerns, but I believe unfounded.

Firstly, the current scenario – a vast expanse of very low quality moorland because of burning, draining and grazing provides habitat for low densities of waders because predators are legally (and illegally) controlled. These species are declining because of habitat loss there and in the lowlands, and likely resurgent meso-predator populations aren’t helping. This argument – that we have to maintain the moors as they are, falls down looking at the work the Moors for the Future and partners have done at RSPB Dove Stone in restoring blanket bogs. There wader numbers have increased dramatically in a very short time.

We can drastically improve wader fortunes by restoration. Are we not duty bound to restore native habitat for woodland species? Are they not equally deserving of a place in the landscape? Not all of it, just some of it, a naturally heterogeneous landscape with wader-filled mires on the tops and expansive woods on the slopes and the valleys where space permits. Framing the debate as all or nothing, waders or Wood Warblers is a distraction that is hijacking the debate. We can have lots of both if we make sure that we create lots of good quality habitat in large blocks.  Anyone that doesn’t believe that should visit the rest of Northern Europe where bogs are surrounded by forest and natural processes predominate. With healthy Goshawk populations you don’t see the number of corvids (and other meso-predators) and Woodpigeons you see in lowland Britain. We need to consider such trophic cascades.

The future of the uplands and its conservation conflicts involves many stakeholders. The ‘what about the livelihoods’ argument is also not just about the landowners themselves, and their futures but also the local people whose houses may be flooded downslope because the moors no longer hold water. Not to mention their restricted opportunities for connection with nature in a hollow landscape. The current environment secretary has made it clear that subsidies for ecosystem disservices – which aggravate biodiversity loss, flooding risk and carbon emissions have to stop. I would be happy if my taxes went towards paying landowners for ecosystem services and processes like carbon sequestration, biodiversity provision and flood risk avoidance. My wife and I are one of many homeowners in the shadow of the moors, we hope to be able to one day see Golden Eagles from the garden and hear Wood Warblers from the patio. An impossible dream? Don’t be afraid to dream a little bigger.