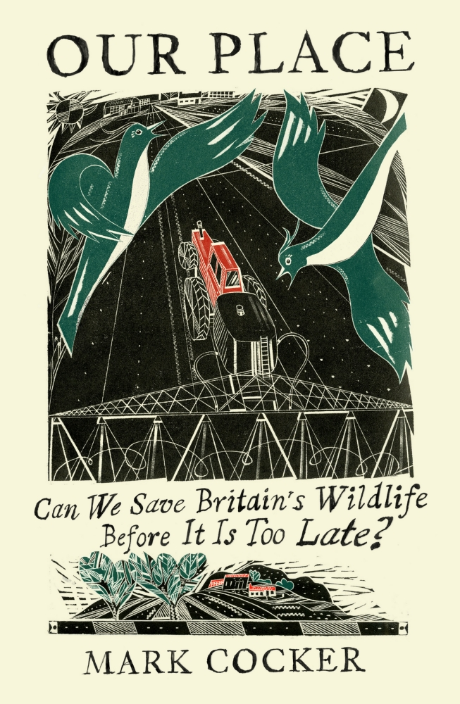 This is the best book on the state of nature since George Monbiot’s Feral and deserves to be read just as widely.

It’s been quite a long time in the making. I interviewed Mark Cocker for Behind the Binoculars back in January 2014 and at the same time he interviewed me and a few of those thoughts ended up in this book.  But the wait has been worth it.

This book analyses the nature of the decline in British wildlife and the causes of that decline.  Cocker takes his own perspective, and it is a surprisingly fresh perspective on the subject, and delivers thought-provoking, useful and accurate insights into how we, the UK, arrived at the deeply-depleted widlife that occupies our fields and woods and gardens.

Knowing Mark Cocker a bit, as I do, I think that I can have a stab at why I think that this book stands above others that cover this territory.  Cocker cares about nature, as all of his writings testify, and he knows about nature as a birder and naturalist, but he has less baggage in the nature conservation business than do many.  We can picture Mark Cocker as a very interested observer, standing a little aside from the organisations and individuals who carry out nature conservation, and looking at them, the problems they face and the progress they make, with a quizzical eye.  And as he looks, and listens, he thinks and assesses.  He’s disinterested not uninterested and he demonstrates empathy but not indulgence.

And he writes superbly.  This book interweaves places (some of which I know well, such as the north Norfolk coast and The Fens), nature, people, history and politics and throws in more literary references than most birders could manage.  It’s a good read: a very good read.

Now, I haven’t told you much about what Cocker actually says in his book – and that’s because I reckon you should read it!  I recommend it very strongly. Once you have read it, you will have an improved understanding of the need for, and the challenge faced by, nature conservation, and that’s for sure.  If you are a regular reader of this blog then I feel confident that you will get a lot out of reading Our Place.

What you won’t get is a very complete answer to the book’s subtitle, ‘Can we save Britain’s nature before it is too late?‘ which I strongly suspect was the publisher’s idea (but I don’t know that). There are important pointers to solutions in the book but it would be a bit much to expect the blueprint for the future to appear here.  But I’ll have a go in one word – ‘mobilisation’.   Unless nature lovers are mobilised to take action through their wallets and purses, and especially through their votes, we will not get the changes that nature needs.  And wildlife NGOs have largely lost the plot on that subject – some of them never got it in the first place, but those that did have slid off the campaigning high ground into a far more transactional relationship with their supporters.

If you have read and liked Mark Cocker’s many earlier books then you will want to read this one as it will delight you too, and probably leave a more lasting legacy of wanting to make a difference. My favourites of his earlier works are Birders: tale of a tribe because it was fun, and about people a bit like me (and indeed about people I thought I could recognise in its pages) and Birds and People because it was so beautifully written and presented so much knowledge of birds and their place in our culture that I would never have discovered on my own. Our Place is even better than those, and is more important, because it is about why we should do better for the natural world we profess to love.  I believe this is Mark Cocker’s best book even though it comes from a highly distinguished stable.

Our Place: can we save Britain’s wildlife before it is too late? by Mark Cocker is published by Jonathan Cape.

3 Replies to “Sunday book review – Our Place by Mark Cocker”