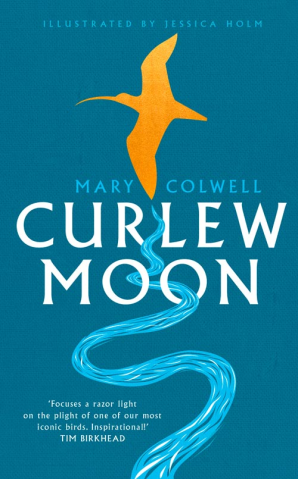 The author of Curlew Moon, Mary Colwell, is partly responsible for stirring up the interest in this declining bird and her book will help maintain a focus on it into the future.  Colwell walked from the west of Ireland to the east of England on a Curlew pilgrimage, seeing places where this wading bird hangs on and where its place in folklore and legend are secure, if not its continued existence into the future.

I enjoyed the book  and particularly the first half of it. Colwell sets the scene well and introduces the bird to us with evident affection. And the stories of myth and legend in Ireland are wonderful.  But as the journey of discovery and exploration nears its end the reader might expect some resolution of the issues, a call to action or a plan for a better future, and this book is rather reticent about those. That’s fair enough because this bird’s problems are severe and may be largely insoluble. The author has set up forums and discussions where stakeholders can try to find ways forward and I’d guess that these will certainly slow the loss of Curlew through increasing action on the ground in some places.  They are very much to be welcomed.

Curlews are emblematic of the problems faced by much wildlife in the UK – they have declined for decades and decades and the main cause of that decline has been the loss of suitable habitat for nesting – agricultural land which is managed at low intensity is now pretty much restricted to the uplands and a few nature reserves and that’s where Curlew tend to hang on. Because they are long-lived birds they probably do hang on in many places for years after the local population becomes functionally extinct as the adults may long outlive the ability of their territories to produce any young to contribute to the next generation.  That may be where we are in Northamptonshire which, I was slightly surprised to see in the latest county bird report, has a few pairs of Curlew still, but I’m glad to see that they do produce some young.

Of course, grouse moors get a friendly mention as they have higher densities of Curlew than similar moorland not managed for grouse shooting: and I was pleased that Colwell correctly states that the nesting densities of Curlew are twice as high on managed grouse moors than they are on other moors (not the 6+ times as high that I am often told they are by those supporting grouse shooting). And, very importantly (and again as stated by the author), the nesting success of Curlew on grouse moors is about three times as high as it is on non-grouse moors – that’s probably even more important. But I didn’t feel that this chapter, Curlews and Controversy, properly got to grips with the real controversy which is what is the future of a system of management that benefits a few species (of which the Curlew has become the most quoted) but disadvantages so many others with an entirely artificial habitat that depends for its income stream on wildlife crime and which increases carbon emissions, increases flood risk and increases water treatment costs.  If the world were run by Curlews then they might well vote for more grouse moors, but they wouldn’t be doing other species, including our own, any favours by doing so.

We are all Curlew fans, but I’m not a Curlew-optimist.  This book, which I certainly recommend that you read, is strong on the attractions of the bird and clear on the problems it faces. And when you look at the problems, the message is strong that almost everything we do has disadvantaged this species, whether it be peat extraction, overgrazing, afforestation, switching from hay to silage, loss of rough pasture, failure to control shooting abroad and loss of estuarine habitat used in winter. All these issues need tackling, and are being tackled, but not with resounding success – that’s hardly surprising when the juggernaut of unsustainable development bears down on wildlife at all corners and in so many ways. But to the extent that thinking of Curlews can help the wider battle then the motivation provided by this book must be a good thing.

The illustrations, line drawings by Jessica Holm, are welcome but some are given so little space on the page that their detail cannot shine through to its full extent.  The ‘Notes’ at the end are a rather sketchy reference section to lead the interested reader to the science underlying this subject but I found them more useful to get into the literature surrounding the Curlew.

Curlew Moon by Mary Colwell is published by William Collins.