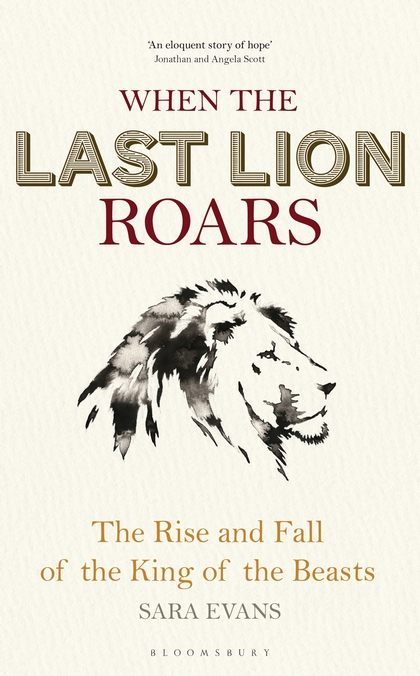 This new book describes Lion conservation today and how we have arrived at the current situation. It rattles along at a lively pace and sets out the information very clearly, making it easy to assimilate. The writing style is akin to that of a well-written, well-researched, newspaper article – highly readable and aimed at a wide audience.

It includes a fascinating account of Lion relatives that are no longer with us, such as the fearsome Cave Lion that stalked ice-age Europe. She attempts to reconstruct its lifestyle based on the scant evidence available from bone remains and cave paintings, before discussing the likely reasons for its demise.

The bulk of the book tells the story of the one surviving species and what has happened to it over the centuries as human influence has increased. What we are left with is a population of perhaps 20,000 animals in a much-fragmented range in Africa as well as one small, isolated, population in Gujarat, India.

She does a good job of describing the complexity of Lion conservation, with so many vested interests and some highly contentious issues to deal with. Take the role played (or not, depending on your viewpoint) by hunting. Then there are the conflicts that arise when Lions impact on people living within their range. She tackles these issues from a neutral standpoint, summarising the views on all sides and referencing the key pieces of published research. This is a good approach, although based on the information provided it often left me rather undecided as to my own views.

I read the pro-hunting arguments and was convinced. Ban hunting and more Lion habitat would surely be lost to agriculture, and valuable revenue streams that help fund protected areas would also be lost. Then I read the anti-hunting perspective and was equally convinced. Over and above the ethical considerations there are difficulties in regulating hunting. Vulnerable populations can be pushed towards extinction if quotas are set too high or social groups are disrupted through the loss of key individuals. It seems there is no easy answer and even the experts struggle to agree. You sense that individuals with bullish views on either side simply cherry-pick their information sources to help defend their views. The reality is more nuanced, depending on the site in question and the way that hunting is regulated.

On a more upbeat note, the recovery of India’s Lions is a success story, inspired by some pioneering early conservation work that continues to this day. Even here though, attempts to improve the situation by habitat restoration and translocation have been mired in controversy and politics for decades, stalling any attempt to establish a second population. Anyone involved with reintroduction projects in the UK and frustrated by the complexity of the legislation and the politics should read this chapter for a bit of light relief.

I’ve read a few conservation-focussed books recently. They often end with the familiar message that we are on the brink of disaster but have one final chance to save the situation if only we can act decisively. Usually that seems a forlorn hope, but, in this case, it seems there is a realistic prospect of progress. There are many successful conservation projects already up and running. And there has been a major effort to harness the outrage resulting from the recent killing of Cecil in Zimbabwe – the much-loved male infamously despatched by a Minnesotan dentist. Conservationists around the world are trying to turn the ‘Cecil moment’ into a ‘Cecil movement’ to help ensure that Lion conservation is better coordinated and funded in future.

While it is not all doom and gloom the likely future for Lions is still rather a dismal one. It will involve ever more constraints and human interventions, until you end up wondering if what is left can be considered as ‘wild’. There will be more fenced off populations, with animals shipped-in and out as and when genetic mixing is needed. Management will ensure a careful balance is maintained between predator and prey, even resorting to contraception (in the absence of hunting) if the Lion population threatens to outgrow the area. Still, that’s better than nothing, and it’s nice to have this book to set out the current situation so clearly.

When the Last Lion Roars, by Sara Evans is published by Bloomsbury on 14 June.