The Acceptability of Wildness?

Whilst running my spring tours in Extremadura this April and May, I read Richard Mabey’s book, ‘A Brush With Nature’, a collection of some of his columns from BBC Wildlife Magazine. I am sure that many of you have read it (it came out in 2010), but if you haven’t, I wholeheartedly recommend it.  In one of the columns, Richard speculates on whether Britain as a nation is ready to accept proper rewilding of our landscapes and the large species that will go with them.

He uses, as an example, the town of Trujillo in Extremadura, in particular the White Storks that inhabit the main square (Plaza Mayor) of the town. As graceful as these birds look, they are a little bit messy when it comes to nesting and a large variety of detritus ends up being scattered around the areas below their nests, not to mention gallons of ‘whitewash’ which can be squirted surprising distances from a high up nest… 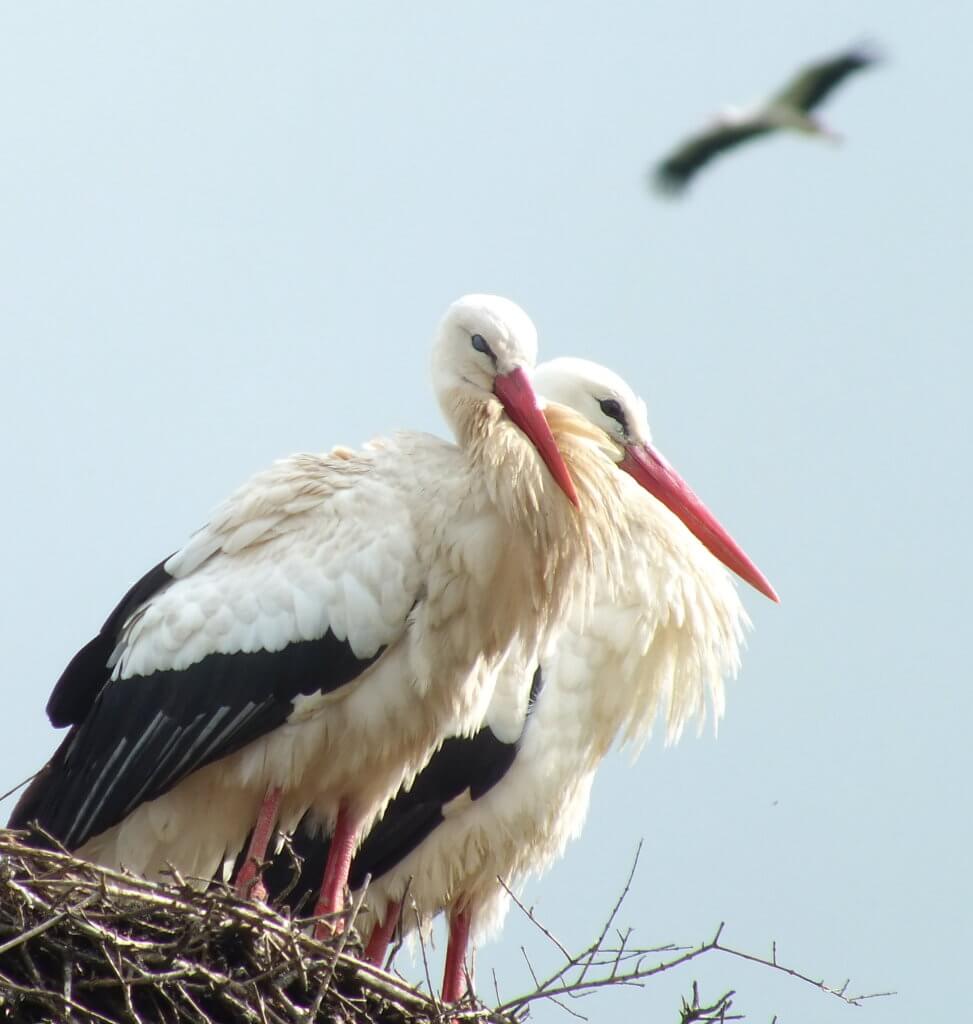 I know Trujillo very well, I lived on the Plaza Mayor for two years at the beginning of the millennium and it is a beautiful medieval town, situated in a bird rich area (although latterly it has been much prettified and is now very much more commercial). I have to admit to the guilty pleasure of watching many a well to do tourist walking around the square, admiring the architecture of the imposing catholic church only to find themselves splattered in a downpour of Stork crap. Yes, I did laugh every time I saw it and yes, I know it was childish.

Trujillo is a major player in terms of internal Spanish tourism and what Richard asks is whether a city like Bath or Brighton would accept these magnificent birds and all the detritus they bring with them (large sticks, bits of rubbish, lots of crap) when they nest, just as readily as Trujillo (and virtually every other settlement in Extremadura) does, or would these British tourist destinations object to this ‘wild’ behaviour on its streets.

I think we can guess the answer.

Once my tours had finished, we headed north out of Extremadura and into an area where the Wolf is very much present, we went there because we like the village and because we know there are Wolves in them there hills – a couple of years ago, when we first visited the area, we stood transfixed on the edge of the village surrounded by the blackness of a moonless night and listened to wolves howling, it absolutely blew us away.

This year we returned, determined to explore the rugged countryside around the village. There are a number of waymarked walking routes heading off from the village that take you deep in to some beautiful landscape, so off we went.  In to Wolf country.  Several miles into the walk we stopped, overlooking a tumbling torrent of a river, we hadn’t seen a soul since we had left the village, nor had we any phone signal, it was just us and the wildness and it was brilliant.  It was here that Richard Mabey’s column came back to me and set me thinking, if it would be difficult to get people to accept ‘messy’ White Storks in Britain, can we really expect them to accept Wolves?

The Wolf is a species that provokes much discussion and argument.  In Britain, the thought of Wolves running free and completely wild would most likely cause mass hysteria; putting a waymarked walk deliberately into an area with Wolves present would be condemned as reckless lunacy; deliberately walking on these routes would more likely be judged as suicidal rather than recreational.  When it comes to the Wolf, the majority of Britain would panic. 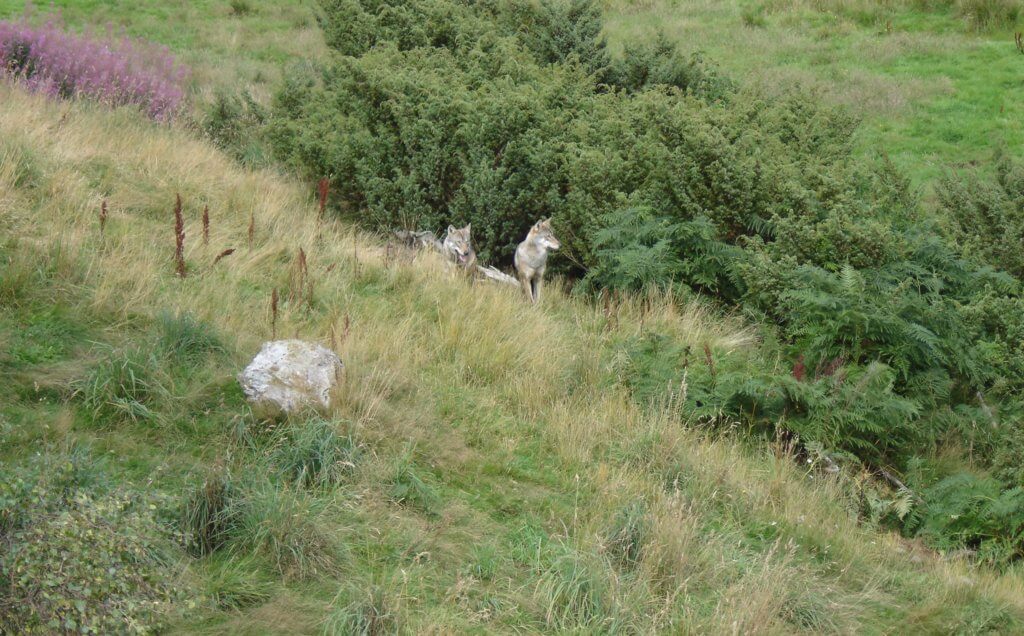 Panic is often irrational and in the case of the Wolf it clearly is, but for centuries the Wolf has been demonised by the church as being the devil incarnate, whilst it has also been turned into the bad guy of many a fairy tale and children’s story/film/cartoon etc.  This image is now part of our subconscious and coupled with a separation from the reality of living with Wolves for hundreds of years, we British now have that irrationality very much ingrained when it comes to these apex predators.

In Spain, the Wolf is also the cause of much discussion and argument, but interestingly this has nothing to do with fears of being hunted by packs of them across the landscape, it is all about farming. Wolves kill livestock, there is no getting away from that, they do. I am going to avoid going off on the tangent of Wolves and livestock, as otherwise this blog is in danger of becoming a book, but I mention it to illustrate that in a country where people live with Wolves, the polemical feature of that relationship has nothing to do with human safety.

Between 2000 and 2015, seventy four people were killed in Britain by Cattle, in the same period in Spain, exactly nobody was killed by a Wolf, nor was anyone attacked. Wolves do have the potential to be dangerous, but then so do Bees, so do Cows and so do Humans and we share our lives with these three far more deadlier creatures without thinking about it. The problem is that the truth, with all its statistics and hard facts, just doesn’t seem able to penetrate the wall of irrationality we have when it comes to Wolves and if the truth can’t get through that wall, how can we expect people to accept the Wolf back in Britain?

I loved the feeling of walking through Wolf country, I relished the idea that where we sat down and ate our lunch a Wolf may well have come sniffing by that night, attracted by the exotic scent of our sandwiches, and padded over our footprints. If you ever get me talking about hearing Wolves howl, I can assure you I will go on and on about it for hours. In short, I am an advocate of the Wolf, but I am also a realist and I just can’t see Britain accepting the Wolf back as a truly wild animal. Before you start to react to that, before you start writing about education and economic benefits etc. just think about how much fuss Britain makes over Herring Gulls and sandwiches, Pigeons and their droppings and then ask yourself the question Richard Mabey posed in his book, would we accept a large bird crapping over our historic towns and monuments, over unlucky tourists and, god forbid, shiny cars? I don’t think we would, Britain likes its wildlife to be benign and tidy, packaged into small parcels of land that we can then cycle over and walk our dogs on. The sad truth is Britain won’t accept rewilding in the real sense of the word.

This is Ian’s twelfth Guest Blog here and you can access all of them through the Guest Blog Archive – click here.