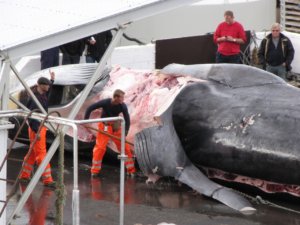 The letter below was sent to eight travel companies asking them whether they would sign up.  So far we have four signatures and two refusals (see below).

I have no beef with the two companies, so far, who have said a polite ‘no’.  All companies are different, they face different constraints and signing this letter would have different consequences for them. It’s a  business and ethical, and indeed tactical, decision whether to sign this letter or not.  It is possible that other means of influence are being used – and it’s even possible that they would be more effective than adding your name to a joint letter.

However, having said that I wouldn’t want to castigate non-signers I would like to thank and praise the signers. This won’t have been a completely easy decision for them either, and they have put their heads above the parapet.

FOR THE ATTENTION OF MS KATRIN JAKOBSDOTTIR PRIME MINISTER OF ICELAND

We are all UK-based tour operators who bring parties of wildlife enthusiasts to your beautiful country.

We have been visiting Iceland for many years and hope to do so for many years to come. We travel from north to south staying in hotels and guest houses, spending our tourist money, we hire vehicles, visit many geological sites, and take boat trips with whale-watching companies. We believe that our economic input into your country is valuable to the Icelandic economy as a whole and especially to some of the more remote parts of your country.

We are aware of course that commercial whaling takes place in Iceland, but to date have supported the view that contributing to your economy helps to oppose what many Icelanders and visitors consider to be a cruel and barbaric practice. However the recent killing of a hybrid Blue/Fin Whale in Icelandic waters has caused international outrage. It has certainly led to an increase in questions to us from some of our customers, and potential customers, about why we continue to operate wildlife tours to a country which allows these magnificent creatures to be hunted.

We understand that your parliament is to review the practice of commercial whaling later this year, and we call upon you not to renew the licence for commercial whaling. Our ability to support Iceland, its international reputation and our contribution to the Icelandic economy now depend upon your policy towards commercial whaling.

Non-signers: Discover the World, Birdquest [Note added on Sunday 4 August: Birdquest have shared with me this afternoon the contents of their own letter to the Icelandic PM which can be found here]