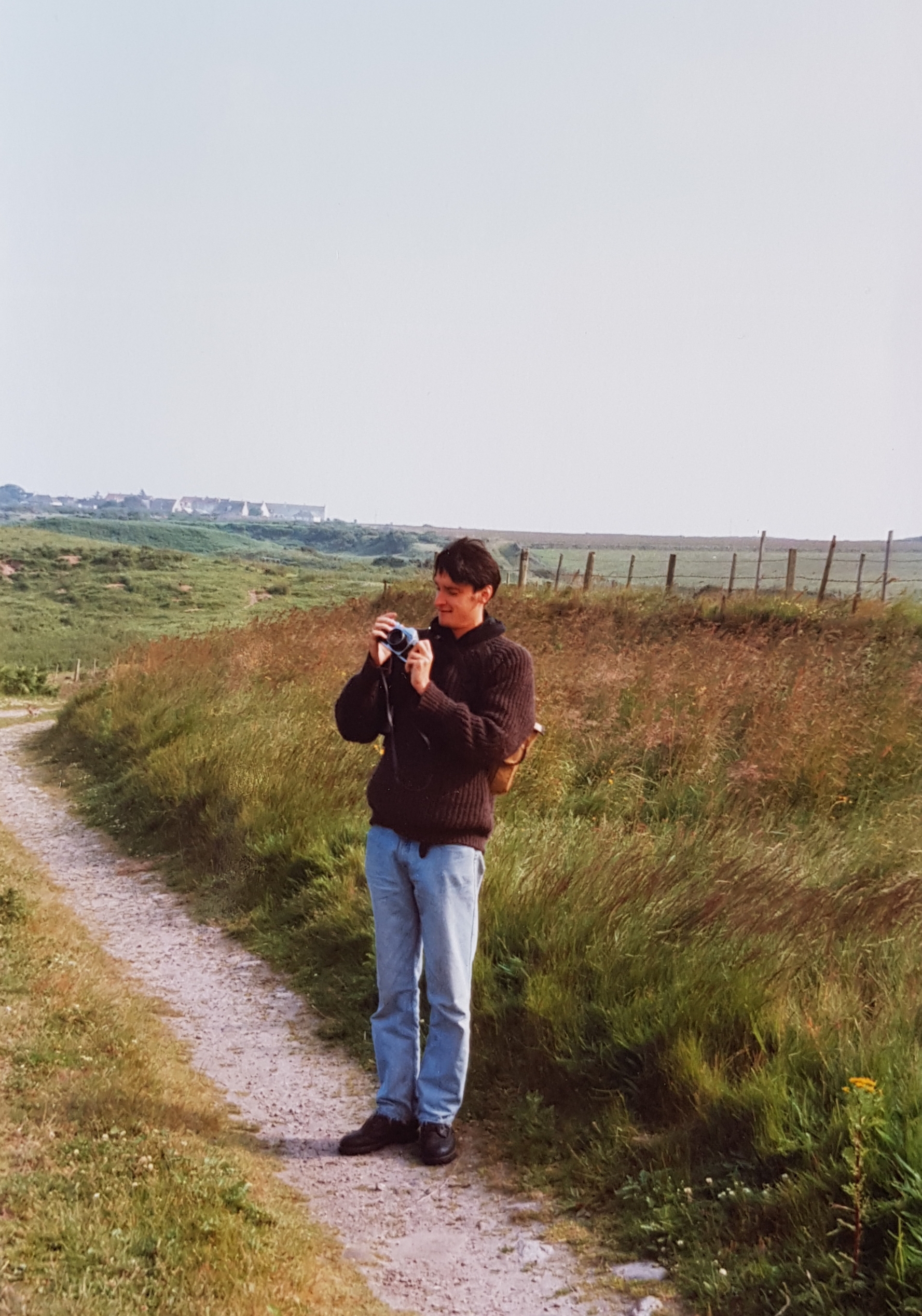 Jonny Hughes in 1993 at Coul Links while working as a summer warden for the Scottish Wildlife Trust. The dunes were a wildlife reserve under a 25 year agreement with Cambusmore Estate in those days but the estate unfortunately decided not to renew the agreement and the triple protected site is now imminently threatened by development.

Jonny is now Chief Executive of the Scottish Wildlife Trust and a global Councillor for the IUCN (International Union for the Conservation of Nature). Twitter: @jonnyecology

I have a vivid memory of the first time I walked the dunes, heaths and wetlands of Coul Links. I remember the cacophony of bird song and the whirring and buzzing of thousands of insects – almost loud enough to drown out the sound of the sea. It was early evening in the springtime of 1993 and I couldn’t remember ever hearing such an uproarious natural clamour.

I ended up falling in love with Coul and making it my home for four years as a summer warden for the Scottish Wildlife Trust, staying on for two winters as an unpaid volunteer in the elegantly dilapidated Coul Farm Cottage. I spent many a night being kept awake by curlews, oystercatchers, common sandpipers and redshanks. I spent many a day recording birds, mammals, invertebrates and the unique plant communities growing in the dune-slack wetlands, which flood during the winter months then explode into flower in the spring and summer.

It was at Coul, heading out one day to see how the breeding little terns were getting on that I encountered my first Scottish wildcat. The cat and I eyeballed each other from only a few metres before she walked away sedately into some nearby juniper bushes. Coul Links is the kind of place where such once in a lifetime wildlife encounters could happen to anyone. It’s a genuinely special place.

It is also a strictly protected place – or so we imagined. Despite having three designations at Scottish, European and international levels, an investigation by Rob Edwards for the Sunday Herald newspaper found that “facilitative” high-level access was given to the developers by Fergus Ewing, Cabinet Secretary for Rural Economy and his highest ranking civil servants. ‘Persevere and these troublesome nature designations can be overcome’, seemed to be the message from some in the Scottish Government.

Meanwhile, Trump-style tactics were increasingly being deployed by the American developers Todd Warnock and Mike Keiser. Why shouldn’t they adopt the strongarm approach that Trump took to getting planning permission for golf on Menie Links SSSI in Aberdeenshire? The all too familiar claims of near 100% support from the local community, that the environment will be “improved”, and the commercial benefits will revolutionise the local economy were employed in Aberdeenshire to good effect and are being used again at Coul Links. Say it often, say it loud and it becomes true. History repeating.

Taken in by these groundless claims and presumably smelling votes, the local MSP Gail Ross and several local Councillors soon expressed their support for the course. Not that there was any danger that Highland Councillors wouldn’t approve the development – they approve pretty much everything and anything. In this case, as with many others, they simply ignored their own policies and the impartial advice of their longsuffering planning officers. They then disregarded expert advice from the Scottish Government’s statutory nature conservation adviser, Scottish Natural Heritage, who have maintained their objection despite political pressure.

In reality, local community opinion on this proposal is mixed and further muddied by the almost weekly circulation of misinformation and baseless claims. Just as the Press and Journal and Aberdeen Evening News worked tirelessly to champion Trump’s cause at Menie, the local Northern Times (the local paper I once wrote the nature notes column for) is firmly pro-development. The loss of one of the most special stretches of wild coastline of its kind remaining in the UK isn’t really what interests Northern Times journalists.

I don’t dislike golf. I’d fully support Mr Warnock and Mr Keiser investing in building a course inland away from the protected dunes, or better still investing in the nearby existing Ferry Links course, badly damaged in recent years by powerful winter storms blowing in off the North Sea.

What I do dislike is politicians at local and national levels who put in place planning policies and legal nature protections and then ignore them when super-confident developers make grand claims about money and jobs.

Coul Links is a study in integrity. The lack of integrity from our politicians risks fatally undermining our rules-based planning system but, more importantly still, it risks destroying the ecological integrity of one of Scotland’s finest coastal nature sites.