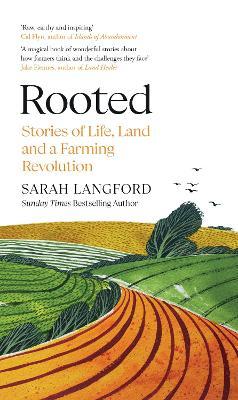 I liked this book, which at its best is a mix of James Rebanks and Jake Fiennes at their best. It’s about farming and the changes in farming over three generations, and what might happen in future. I think the author ends up in the right place, more or less, but I wondered whether or not she would once or twice along the way.

My favourite pages (pp38-40) are those that describe Charlie, a 60-year-old farmer who is climate-sceptic, pro-Brexit, pro-UKIP and loathes the BBC.  We can all agree with Charlie about the NFU (though ‘flipping’ is not the usual word used for the F in NFU) and that Countryfile is often ‘bollocks’ but are vegetarians really hypocrites as he seems to think?

When I got to the end of the book and read that the author believes that ‘farming can offer us solutions to many of the problems we face’ then I agree with her, but that has been true for the last 50 years too, and it has been a large number of Charlies who have prevented much progress. It can, but it hasn’t. The proliferation of Charlies, you can see them everyday on social media, is the major block to farming getting to a better place. It’s good that not all farmers are Charlies.

There’s a bit too much contrast between farmers and urban dwellers in this book – as though all of us living in the countryside agree with Charlies – we don’t. I suppose I might be classed as urban living since I live in a small rural market town but while reading this book I have been listening to the sound of an unseen combine harvester in the nearest field to my house.  The split in the country is not between the 1% of us who are farmers and the 83% who live in urban areas (p324) but between the 1% who are farmers and get income support from the taxpayer and the 99% who provide it. Strangely, the 1% getting the income support have an enormous say in that process whereas the 99% have very little.  Twenty years after its publication, the recommendations of the Curry Report remain relevant – and farming is still disconnected from the rest of the economy and the environment.

When the author has a close encounter with a bird of prey (which I am not sure she identified correctly, but that doesn’t matter [Note added later – certainly was a Kestrel, I’ve now seen the photo]) she writes ‘Some blame [raptors] for the crash in small-bird populations, but when I look it up I find that every study undertaken has found the opposite’ which is not a bad summary of where the science lies.

I enjoyed this book very much and I will now purchase the author’s first book, In Your Defence, to find out what she says about her life as a barrister.

It’s a shame there isn’t an index, but the references are pretty informative, although when I checked the reference to the statement about raptors mentioned above I found that reference jumbled up two reports which would make either of them a little difficult for the busy reader to find.

The cover? I like it a lot and would give it 8/10 (although the publisher might reflect on the fact that having all those little words at the top of the cover means that it reproduces badly online even though it looks fine in the hand).

Rooted: stories of life, land and a farming revolution by Sarah Langford is published by  Penguin, Viking.