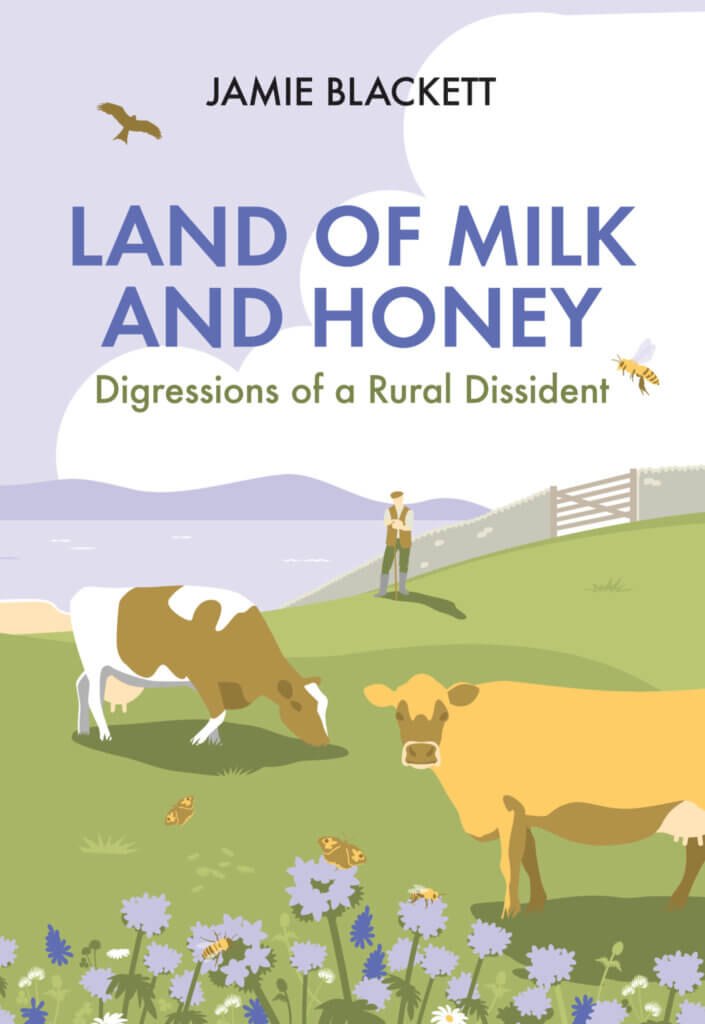 I enjoyed this book, but then I went into it expecting more in the way of entertainment than instruction, and I was right. It is entertaining, provided that you have the mindset to be entertained by views that you don’t share (which I do) or you embrace with enthusiasm the views of the author (which I don’t). But actually, there were things that I almost agreed with Blackett about although he has a way of putting many of them that puts me off, even when I’m almost prepared to admit common ground.

But there is common ground as I can’t imagine that there is anyone in the world, whose views I share 100% nor anyone whose views I eschew 100%. And the same is probably true of Blackett because he, a farmer, ex-soldier and Etonian teamed up with George Galloway to oppose the SNP in the 2021 Scottish parliamentary election (on the ‘my enemy’s enemy is my friend’ ‘principle’). An interesting alliance and I wanted to hear more about it than emerged in these pages.

Blackett would need very broad shoulders to make room for all the chips they need to accommodate. As well as the SNP (and Nicola Sturgeon in particular) he has it in for civil servants, the BBC, wildlife presenters (especially Chris Packham), the RSPB and vegans.

I can’t fathom, and he never explains, why he seems to hate and despise vegans so much. Yes, he is a beef farmer who reverted to dairy farming, but that doesn’t really go far enough to explain the depth of the animosity.

Almost everyone in the world except, it seems, Blackett, James Delingpole and Robin Page (OK there are a few others) are lumped together as Neo-Roos (a rather complicated and unhelpful reference to Jean-Jacques Rousseau – you guessed?) even though the folk that Blackett lumps together in this way are probably a highly diverse collection of people, except, from his perspective, they don’t think the same as him so they are all the same. For someone who knows what ‘othering ‘ is (see page 33), and complains about it, there does seem to be quite a lot of it going on in these pages. If Blackett had any real power in the world this might be a bit worrying, but since he doesn’t, it makes for a stimulating read.

I was interested in his views on Scottish independence (he’s against it). I can’t say I’m against it because I don’t think about it all that much because I don’t have a say in it, but I have a feeling that my life will be a bit less simple and a bit less pleasant if Scotland goes independent and a slight worry for me is that the lives of my friends and relatives north of the border may also be a bit less pleasant too. Blackett did give me some insights into what he thinks and why he thinks it but it is so mixed up in slagging off the other ‘side’ that I didn’t get as much as I wanted – but it was somewhat entertaining.

But what about wildlife?  I do know a bit about wildlife, and so this might be common ground – and it is, in terms of a shared admiration for wildlife. And, from what he writes, I believe that Blackett really does notice the geese, and Curlews and Skylarks etc. He loves Skylarks and (p128) he prays ‘that they are fledged before the mowers arrive in the third week of May’ in his silage fields. They won’t be – they are quite unlikely even to have hatched (see information about the typical Skylark of the BTO’s Bird Facts, see here). Blackett suggests that the rotational grazing regime for his dairy cows will be ideal for Skylarks but he doesn’t understand the biology. He thinks that a 3-week, no-cows, growth period for each field should suit Skylarks quite well because their incubation period is 11 days. Actually, you have to add in the laying period (an egg a day for 3 or 4 days I guess) and the fledging period (16+ days) and that gets you a total of 30+ days or so. And that means that a 3-week gap is pretty hopeless for Skylarks – they’d have to be extremely lucky to avoid trampling or being covered in the exitings of a cow’s backside under those circumstances and they have to nest on a cover-free field at the mercy of the predators. And Skylarks need to produce more than one brood a year to maintain their populations – closer to three broods. No Mr Blackett, prayer won’t really work here – your pasture management is a death-trap for Skylarks, and that is why densities are so low in the West Country and places like Cheshire – lots of nice cows but very few Skylarks. This isn’t rocket science, but it is science, and it has been around for years and years and years. I recommend Paul Donald’s 2004 monograph on the Skylark as your penitential reading.

If you don’t know much about Skylarks, and don’t check, you’ll think that Blackett is a kindly farmer who cares about wildlife and is doing his very best. The fact is, he’s doing what lots of farmers are doing to make a living but it’s pretty hopeless for much wildlife. I don’t demonise them individually for the loss of Skylark, but the pasture management system has wiped Skylarks out from much of the green and birdless land of western dairy Britain. And just to finish this, it is the arable fields of the east that have higher Skylark densities.

There is a story (page 50) told to Blackett by an unnamed gamekeeper, from an unnamed locality where two people turned up, declared themselves as RSPB staff who were there to do an inspection, and they then searched the guy’s pick-up. Blackett sought legal advice on this and decided that these folk were acting unlawfully although he has the wisdom (or did a lawyer suggest this addition?) to say that maybe they were volunteers or imposters. This tale sounds very unlikely to me. That two RSPB staff would act in such a way (because they have no right to inspect places on their own volition) is so unlikely as to be incredible – the downside if you were caught would be massive. But this also sounds like a very biddable gamekeeper who doesn’t know his rights and doesn’t use his fists. Still, we have to assume that Blackett had no verified horror story of RSPB bad behaviour and so he went with this story and made the most of it. Very entertaining.

Blackett (page 35) blames Chris Packham for the fact that he, Blackett, gets abuse on social media (without any evidence being produced) but then, concedes that Chris gets some abuse too. When it comes to dead wildlife being hung on Chris’s gate, Blackett writes that this was the work of a lunatic, but then goes on to speculate ‘In the murky world of environmental activism fake news is a recognised tactic. The story was suspiciously quick to break in the Daily Mirror and the BBC’.  Blackett starts with telling us that he receives online abuse and seems to equate that with someone hanging corpses at the entrance to someone’s property but then hints that it may be a made-up story. Very entertaining.

I read almost every word of this book, some of them several times and I honestly enjoyed it. It’s well written and opinionated but I don’t share the opinions very often and I find it difficult to discern where Blackett got his from – they aren’t very much based in science as far as I can see and as far as he explains here.  I was interested in all the farming details, and the difficulties of making a living from farming. It made me wonder why farmers haven’t found a way to get a better deal from supermarkets for their produce. Surely the farming unions, and farmers’ leaders, have let them down here. I’d be very happy if dairy farmers got more of what I pay my milkman for their produce (although increasingly our doorstep bottles are of oatmilk rather than cowmilk – Skylarks might benefit from that).

I was telling a friend that I was reading, and enjoying, this book, and they asked whether the book had an index – it doesn’t (which ruled it off my friend’s potential reading list) and it doesn’t have a reference section either. I’m not surprised.

The cover? That’s a low stocking rate of cows (and I don’t remember Guernseys or Jerseys featuring in the book), and, probably correctly, no sign of wildlife in the pasture, so probably quite accurate. I guess it’s supposed to be a rural idyll. I’ll give it 8/10 because it is attractive and suggests that this is about farming.

Land of Milk and Honey: digressions of a rural dissident by Jamie Blackett is published by Quiller.