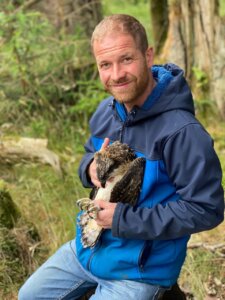 Tom Bowser is the owner of Argaty and author of A Sky Full of Kites: A Rewilding Story (reviewed here).  Argaty is a working farm based on the Braes of Doune in central Scotland. It has been home to the Bowser family since 1916. The farm has two aims: to produce food in an environmentally sensitive manner and to make a home for nature. The farm is home to the award-winning Argaty Red Kite project , and it is a member of the Scottish Rewilding Alliance. www.argatyredkites.co.uk @argatyredkites

For people and beavers in Scotland, 2022 has been a strange year, a period of great progress and of missed opportunities. As a nation we have taken some massive steps towards co-existing with these biodiversity-boosting animals. However, much work remains to be done, our report card still reads: “Shows potential, but must do better in 2023.”

Make no mistake, real progress has been made this year. Our first reason for joy comes in the shape of the recently published Scotland’s Beaver Strategy 2022-45, a roadmap which details how our country can “maximise the environmental and wider benefits of beavers, while minimising negative impacts through effective management and mitigation.” One of the most ambitious species management plans ever published, the strategy should support Biodiversity Minister Lorna Slater’s wish to see beavers widely reintroduced across the country.

More crucially, it should also reduce Scotland’s dismal beaver cull numbers. Since they were granted European Protected Status in 2019, around 100 beavers have been culled under license every year. This equates to around one in ten of our tiny beaver population, estimated at just 1,000 animals. Previous Scottish Government policy forbade beavers from being relocated to new parts of the country when their activities brought them into conflict with people, leaving lethal control as the only option for those unable to co-exist with them. Now, thanks to Ms Slater and thanks to the strategy, that embargo has been lifted; beavers that would otherwise be killed can be moved instead.

Over 50 stakeholders attended planning meetings and helped to draft the strategy. Many of those people had previously voiced concerns about the return of beavers. That they approved a plan that supports the carefully managed growth of the beaver population is no small thing. Huge credit is due to the International Union for Conservation of Nature for facilitating the process and bringing all sides together.

Further good news came this week as RSPB Scotland’s application to relocate beavers to their Loch Lomond reserve was approved. The result means that next year animals will be safely trapped and removed from prime agricultural land in Tayside and released on the reserve. Loch Lomond will become just the third authorised wild beaver release site in Scotland’s history. The first was Knapdale forest in Argyll, home of The Scottish Beaver Trial reintroduction. The second was my family farm, Argaty, where twelve animals were relocated between November 2021 and July of this year.

Beaver translocation consultations are a bruising business, which stir up strong emotions in both supporters and detractors. We found that out the hard way, and the RSPB know it too. The charity deserves serious respect for navigating this confrontational process and getting their license. Their result is good news for Scotland’s beavers. Each translocation helps normalise the concept of moving rather than killing them.

A final reason for cheer came as Cairngorms National Park Authority announced that they will lead consultations in 2023 on bringing beavers to the park. As a nation we are making significant steps towards restoring this species.

Beavers are remarkable animals and represent allies in our fight against climate change and biodiversity loss. Their deadwood-filled wetlands boost insect, amphibian, bat, bird and fish numbers. Their dams trap sediment and agricultural run-off, purifying water downstream. Dams also impound water – a vital service as climate change brings more periods of deluge and of drought. Since relocating animals to Argaty, we have witnessed their incredible work first-hand. Wrens, robins and blackbirds dart between felled, coppicing trees. Dragonflies egg-lay in floating gnawed wood. Frogs and newts breed in beaver-dug canals. In this winter’s rainstorms, beaver dams held back water. For the first time in five years the outflow stream did not burst its banks, our dirt tracks did not wash away, our farm did not flood. Imagine if we could unleash these benefits across Scotland. That would give real cause for cheer.

However, for all the progress made these past twelve months, Scotland’s beavers still face an uncertain future. The question remains: Who will provide homes and spare them from being culled? Without willing recipients, the policy of moving beavers when they come into conflict with people simply cannot work. For those animals the bullet will be the only solution. The loss of these ecosystem engineers would be tragic at the best of times. In an environment crisis it would be little short of a scandal.

So, who will step forward for Scotland’s beavers? Until such times as the process becomes less confrontational and less time demanding – we spent over 100 hours on our consultations, the RSPB even longer – it seems unlikely that many private landowners will offer homes. At present the odds are stacked against beavers – we must address this inequality. Any other native animal can be relocated within Scotland without need for a license, while across the UK, non-native species like pheasants are imported and released in their tens of millions every year with no consultation. Beavers deserve some parity here. If, as was the case for us and for the RSPB, animals are already living nearby, if they will arrive at a site anyway given time, is there really a need for a consultation? I think not. Removal of this unnecessary barrier would enable many more people to offer their land for relocations.

While that hurdle remains in place, the onus must be on Scotland’s nature agencies, public land managers and wildlife charities to fulfil their environmental obligations and support the expansion of our beaver population. So where are Forestry & Land Scotland (FLS), managers of 8% of Scotland’s land? Why have they not led a translocation application?

Why are the RSPB and Trees for Life the only charities to have run translocation consultations? Where are those organisations who declare themselves to be pro-beaver, especially those who have represented the animals’ interests at a national level for years?

Why did Loch Lomond and the Trossachs National Park (LLTNP) refuse to lead on relocating beavers to FLS land within the park? When animals elsewhere in Scotland are being killed in their droves, was the reason given by LLTNP – that there were already beavers within the park’s boundaries – really good enough? Again, I think not.

For the Scottish Government’s nature agency, NatureScot, I reserve a little sympathy. Successive governments have done their best to neuter the organisation, continually cutting their budgets. For the resource-stripped agency, delivering the new beaver strategy understandably proved all-consuming. Now that the strategy is here, NatureScot must help make it work. They must pledge to release beavers on all suitable parts of their National Nature Reserves in 2023.

As a country, Scotland is hugely pro-beaver. Polling conducted in 2020 revealed that 62% of people wished to see beavers widely reintroduced across our country. Government policy now supports the policy of moving beavers ahead of killing them too. Non-elected officials must not be allowed to defy the elected ministers and beaver-supporting public upon whose behalf they apparently manage land. Further inactivity would not just be a failure. It would be an assault on democracy. These organisations must now commit to rehoming beavers. In significant number. With appropriate haste. 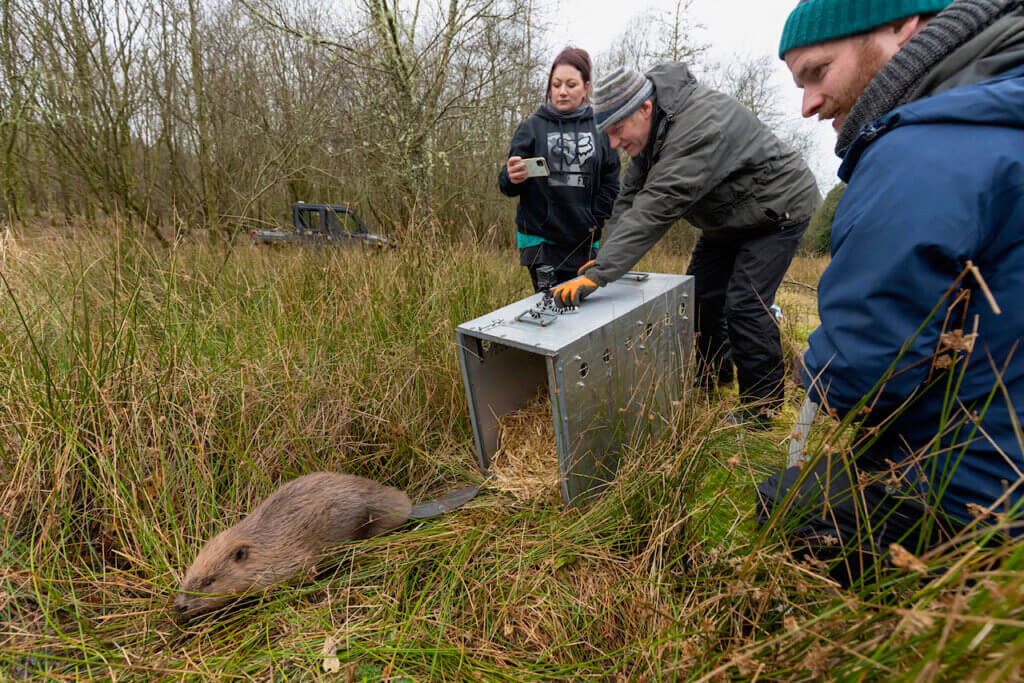 But allow me to finish on a positive and remind you again of the progress that has been made these past twelve months. Since entering coalition with the SNP, the Scottish Greens have brought a progressive edge to government. Thanks to them translocations are not just permitted across Scotland, but set to happen. Credit them, and credit the RSPB too. They have been brave. They have paved the way towards a better future for Scotland’s beavers. Now others must take up the baton, offer sites and rehome beavers. In an environment crisis, Scotland’s people and beavers deserve nothing less.