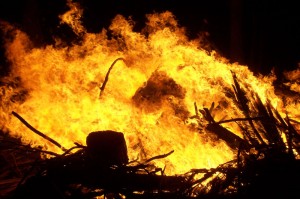 Despite the soggy weather, beacons have been lit across the UK to celebrate the Diamond Jubilee.  Spare a thought for the inhabitants of Tristan da Cunha and their Jubilee beacon.

When the most remote Jubilee beacon in the world was  lit, its flames were fuelled by the bodies of invasive species of plants.   Work to clear New Zealand flax, loganberry and other invasive plants is creating space for endemic species to return and the dead vegetation has to be destroyed, so the Island Council agreed this was a practical course of action. More than 40% of the Tristan archipelago is conserved for rare birds, plants and other wildlife and two of its islands, Gough and Inaccessible are UNESCO World Heritage sites.

Since the Coalition Government came into power (what is the point of the Liberal Democrats by the way?) we have been seeing a slaying of the quangos – some would say a bonfire.  The Royal Commission on Environmental Pollution and the Sustainable Development Commission, and their excellent reviews of the state of things, are no more.  And those roles have not been adequately replaced by government, government agencies nor, yet, by the NGOs.  They have just disappeared – there is not even a burning ember or the smell of smoke on the air to remind us of them.

Quango stands for quasi-autonomous non-governmental organisation and is a horrid little word. There is some debate about what they are and how many quangos exist. Bodies such as Natural England would once have been called quangos, and since the term is usually used as a term of abuse, they sometimes still are referred to in that way eg in the publicity campaign that preceded NE’s change of mind over Walshaw Moor.

However, we can no longer refer to NE as being quasi autonomous – they appear not to have any autonomy at all.  We need to learn to call such bodies delivery agencies. And what are they delivering?  They deliver government policy and perhaps Ministerial whims.

Government is there to be shot at – despite everyone always saying that praise works so well, I do not know of an organisation that exists simply to praise all the good things done by government.  And so, if bodies such as Natural England are now delivery bodies how should we interact with them?  Are they, whoever ‘we’ are, on ‘our’ side or ‘their’ side?

Organisations such as Natural England used to attract a very different type of person from the Civil Service.  NE’s (and before them NC’s, NCC’s and EN’s) staff were often similar in outlook to those of NGO staff but had chosen a different route to express their love of nature and passion to protect wildlife.  These days it is much more difficult to encourage young nature enthusiasts to head for the statutory sector as the job security is less certain but more importantly, the chance that you can make a difference to nature seem to me to be materially reduced.

When I started writing this blog I hadn’t foreseen the point I am now going to make; there are three of our list of ‘new Elizabethan’ naturalists who made a huge difference through the statutory nature conservation sector.  Max Nicholson almost invented the statutory sector (and much of the rest of the system that has been handed down to us), Norman Moore worked eminently in that sector and Derek Ratcliffe was a campaigner and visionary within the statutory sector whose like we have not seen since.  How would they all view the current state of affairs, I wonder?

There seem to me to be two consequences of the change in status of our quangos – and neither has yet been properly implemented.

First, NGOs need to raise their game to fill the void.  They need to speak out more and to produce more telling and authoritative reports and statements of what is wrong and how it should be put right.  Maybe it’s difficult to do this when money is tight but it seems to me to be an inevitable consequence of the current situation.

Second, government, in our case Defra, needs to fill the void it has created too.  If NE cannot speak independently on all matters to do with nature conservation then we should hear much more from Defra to explain what is happening.  This has signally failed to happen. Defra has shut down NE’s ability to speak out and not bothered to fill it itself.

The justification for trimming the sails of over-exuberant quangos is, and there is some truth in this, to recapture the policy voice in the government department where resides the democratic responsibility for policy.  But that necessitates a replacement of the quango’s voice with argument, explanation and justification from the department.  We see precious little of that from Defra and that is not good enough.  The statutory conservation voice has been snuffed out, not transferred.  A beacon has been doused.

9 Replies to “Bonfires and beacons”