The BTO keeps doing amazing things these days.  In my copy of BTO News there is an article on swift migration.

Through putting geolocators on swifts – and rather critically taking them off again a year later – the details of the swifts’ movements in Africa are revealed.  And they are fascinating.

When A320 was caught at Fowlmere by Doug Radford I was at the Game Fair. A few days later A320 was somewhere in central Spain whereas I was at Westminster tube station looking at adverts. By mid August A320 was high over African rainforest in the Democratic Republic of Congo whereas I was at the Bird Fair but still seeing the odd swift over my Northants garden. In early January I was at the races at Cheltenham and enjoying a large flock of waxwings whereas A320 was swanning, swifting, up and down the coast of Mozambique. 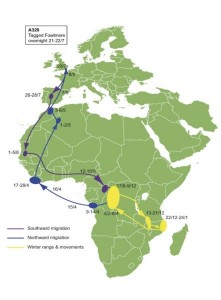 Come April, which was my last month at the RSPB, A320 spent 3 days flying across the Gulf of Guinea (that surprised me – I would have thought he/she would have stuck to an overland route) and then spent an interesting 10 days over Liberia (and just maybe the Gola Rainforest of Sierra Leone) before heading over the Sahara.  What better way to avoid last year’s Royal Wedding than flying over the Sahara some might say?

On the day I flew to the USA, A320 was in Morocco and only five days later A320 was back at Fowlmere (whilst I was in North Carolina).

I think A320 had a pretty interesting year with lots of interesting travel revealed by the geolocator. In the time I visited two countries A320 visited getting on for 30 different states. He/she stayed longer in some than others and the detail revealed by this study, and other swifts that have been similarly tagged, is fascinating.  Potentially this information is useful in terms of identifying areas which are important to conserve but the wide-ranging travels of this particular swift demonstrate that potentially any loss of rainforest anywhere in Africa might eat into its feeding habitat.

African deforestation is now faster than elsewhere in the world – partly because it got off to a slower start than elsewhere.  Swifts are declining in the UK although are pretty stable – or generally increasing – in Europe as a whole.  Are similar studies being done elsewhere in Europe – is the BTO encouraging such studies?

The swift is still enigmatic – but not quite as much of an enigma as before this study. Great stuff!  Novel, fascinating, and with potential to be useful too.