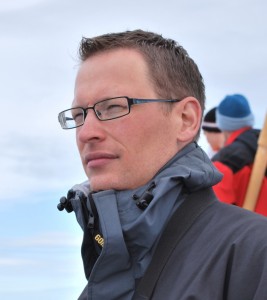 Colin Williams is a writer who explores our relationship with the natural world. He is also a conservationist and for many years worked with cetacean conservation organisation ORCA surveying whales and dolphins in northern Europe. He’s also worked for Planet Whale as a whale watching guide and in 2012 was writer-in-residence at WhaleFest.

The sea, the ocean, the deep blue, Davy Jones’ locker, call it what you will. It’s the great leveller. As the source of ancient first life, the home of the planet’s most majestic residents and a place of fear and wonder the sea is, in Jaques Cousteu’s words “the great unifier, man’s only hope. Now, as never before, the old phrase has a literal meaning: We are all in the same boat.”

The ocean has indeed become, and will become even more so, the ultimate barometer of whether or not we’ve stuffed up the planet completely. And for decades, along with the fish we eat, the most publicly visible mercury within that barometer has been the great whales. Prominent campaigns like ‘Save the Whale’ mean they have now become talismanic, diving deep into our consciousness and staying there. They swim in our imaginations as things of terror and fascination just as they were when we hunted them and our human history beside them has taken root deep in our minds. Their continued death at the hands of those who hunt them remains, for most people, one of the ultimate acts of natural vandalism; wanton and cruel.

Of course, the reality is that whaling is not, by any measure, anywhere near the biggest threat to whales and dolphins. Without question it is bloody, horrific, cruel, sickening and unnecessary and it deserves to be stopped.  But our rage and indignation is sometimes directed towards these things while by-catch, ship strike, pollution, habitat degradation and the collapse of marine ecosystems are perhaps the last things folk think about when they think of whales.

And I’m not sure how useful that is. Is an outpouring of anger, despair and disbelief really the thing that’s going to save them? (And, let’s be clear, they need help) Is whaling just one example of how our most extreme emotions have been misplaced?   And does that carry lessons for the conservation of other species and other environments?

In the course of my work I’ve been to many discussions on cetacean conservation from conferences to offices to dinner table chats with eminent scientists and experts. And unfortunately, the best that can be said for many of them is that they got me several hours closer to death without serious injury. It is, frankly, time I’ll never get back. I’ve seen NGOs and individuals alike in open enmity, pouring derision on what others are not doing whilst vehemently defending their own position. These opinions are sometimes forged under the thrall of a charismatic, Svengali-like leader and will brook no other viewpoint. And while they fight about whose approach is the best the bystanders look on, awaiting instruction from the experts. A particularly prominent advocate of sustainable food production said that when it comes to the things we as individuals can influence the experts are in danger of presiding over “a massive misdirection of emotional engagement.” I like that very much because I believe emotional engagement is where it’s at. And the best lessons in this comes from the younger generation.

At the recent New Networks for Nature event it was intimated that there are inherent difficulties in getting children interested in nature. Therefore, we should move on and concentrate our pressure upon those people who can make a difference right now, rather than wait for a generation to grow up. Difficult getting children interested in nature? I don’t buy it. At Planet Whale’s WhaleFest in October of last year you couldn’t move for the things, they were everywhere:

Children’s writers keeping packed rooms enraptured with their salty tales, guest speakers wowing them with their adventures in film-making and art, divers helping them to try scuba diving and opening up a world of wonder, charities getting them enthused about marine life and the problems facing our seas and virtual whale watch trips with kids screaming and pointing with enthusiasm at the appearance of deep and mysterious relatives.

So, if we want them to cherish the natural world, what exactly are we equipping the next generation with? It feels as if anger and malice towards others would be the wrong thing. It’s narrow, sometimes single issue, weakens our position and will burn out quickly. If we give it to our children, they can’t do much with it. It would be like giving Jimi Hendrix a banjo.

But if we can hand them understanding, reasoning and the ability to let themselves become enraptured with nature, to unashamedly LOVE the natural world, to be inspired; that would be a legacy to be proud of because its applications are universal, powerful and infinite.