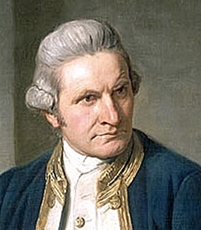 Those Yorkshiremen get everywhere don’t they?  Certainly Captain James Cook seems to have done.  His journeys of discovery are generally regarded as being Pacific Ocean expeditions but to get to the Pacific you have to start in the Atlantic and either hang a right and go around Cape Horn or hang a left and go through the Indian Ocean or the Antarctic Ocean, nip around the Pacific, and then head back through the Atlantic to home.  It was homeward bound on the second route that Cook claimed South Georgia and the South Sandwich Islands for Britain in 1775.  Although he was knocking around those parts in the southern summer these two groups of islands which now make up the British Overseas Territory of South Georgia and the South Sandwich Islands were not the warmest or most inviting places Cook encountered on his travels.  Having said that, the trouble with warm inhabited places is that tempers sometimes get frayed and that’s what Cook found on his third expedition when he was bumped off on Hawaii.

The seas around these islands are very rich in wildlife – and lots of seabirds nest on the islands themselves as a result of that abundant food. That’s why I was hoping that the consultation on marine protected areas would give real and strong protection to these remote waters (after all we are doing very poorly in protecting the marine areas around our own UK coastline) but the announcement yesterday was disappointing.

The c3 million pairs of chinstrap penguins will be disappointed too.  You only have to check Wikipedia to find that they forage up to 50 miles offshore each day and yet the announced no-take marine zone around the South Sandwich Islands extends only to 12 miles. Nigel Haywood, the current Commissioner for SG&SSI (as we will call them) had better watch out for angry chinstraps as they are reputed to be the most aggressive of all penguins. (And he could do with checking the entry on the South Georgia and South Sandwich Island website which grossly underestimates chinstrap numbers.).

Other wildlife dependent on krill will also be disappointed that the krill fishery is only closed for five summer months on the grounds that this ‘should minimise any competition between the fishery and krill-dependent predators at the key time of year when they provisioning young and are restricted in their foraging areas’.  This sounds good but isn’t anything like as good as it sounds in that the peak months for catching Antarctic krill in these waters are, or certainly were, in the Antarctic winter months not in the Antarctic summer. Added to which, there are concerns that krill are overfished and if they are then the long term prospect for the stock is bad whichever month the fishing occurs.

So the words are good – Nigel Haywood is a linguist after all – but the measures announced show every sign of being the type of limp compromise that characterises the UK approach to nature conservation at home and in our Overseas Territories.  When there is the opportunity to protect nature or favour any economic activity then nature is compromised and economic activity favoured.  Instead of taking the type of grand and meaningful action that Captain Cook would surely have favoured we opt for half-cooked compromise.

I know that several readers of this blog did as I did and contacted the Government of South Georgia and the South Sandwich Islands back in the autumn asking them to do a better job than this.

NGOs also responded to the consultation and generally seem very disappointed with what has emerged.

The Pew Environment Group  said “Additional protection is always welcome, but the announcement today is inadequate and disappointing. Some form of fishing is still permitted in almost all of the seas around the islands. Most of the area remains only partly protected and open to fishing, with only very small areas being fully protected.“

The RSPB said: ‘We’re disappointed that the outstanding marine environment of the South Sandwich Islands has not been fully protected from fishing pressure or oil and mineral extraction, and hope that we can work together with the South Georgia Government to preserve these pristine seas for future generations’.

Prof Alex Rogers (Oxford University) said: “South Georgia and the South Sandwich Islands are the wildlife jewel in the crown of the UKs overseas territories. The discovery of entirely new communities in the deep seas off the South Sandwich Islands indicate that we have not even completely explored the Maritime Zone of these islands. Whilst I am very pleased to see that there are some specific new measures to increase protection of the marine ecosystems around South Georgia and the South Sandwich Islands these fall significantly short of what I and other marine scientists were expecting given the global importance of the area for the conservation of marine predators and other elements of marine biodiversity. I therefore hope that this represents the beginning of an expanding programme of marine protection that is warranted by the spectacular populations of seabirds, seals and whales as well as the unique and in some cases endemic populations of fish and marine invertebrates.”

If you wish to express your disappointment, as I do, then an email to

would be the person to get in touch with.

“I welcome the Government of South Georgia and South Sandwich Islands’ announcement to create additional measures to look after their Marine Protected Area. Their high standard of environmental stewardship and marine protection is crucial in protecting the unique and internationally important biodiversity in the Southern Ocean. I am delighted that the Government of the Territory continues to be among the world leaders in delivering marine and environmental protection.”

Well, Mr Simmonds, you clearly haven’t convinced us all yet.

We’ll be told this lax protection is to kick-start the global economic revival next.  Why is it that everywhere a buck can be made then it is made? Why not put environmental protection top of the list some times? If you can’t give full protection to a wildlife-rich remote outlier of the ‘Empire’ where can you? No sign we are doing it around our own shores and no sign from this that we will do it on the other end of the world.

What would Captain Cook have thought? No idea! But I wonder why our journey on this planet always turns from explorer to exploiter – and often to destroyer.  Half-cooked protection is the first step towards destruction.