Skip to content
The connectedness of the world intrigues me.  I like making connections between facts, people, events, ideas.

I’m getting a bit tired of hearing about the ‘horse meat crisis’ (eg here, here, here, here, here) only because it certainly isn’t a crisis when safe delicious horse meat is incorporated alongside safe delicious cow meat in our food.  It is certainly a scandal because we’ve all been duped so that someone somewhere can make a bigger profit. As Ruth Davis from Greenpeace (who used to work with me at the RSPB) said on Any Questions, the fact is that the food chain is now so long – stretching across the European Union to Romania – that it is difficult to understand it, monitor it or regulate it.

Once before when there was a ‘crisis that never was’ – the Bird Flu crisis – it was Hungary that cropped up instead of Romania.  Do you remember we were all going to die from Bird Flu (which should really be known as Poultry Flu) and when there was an outbreak of Bird (Poultry) Flu in East Anglia everyone was keen to blame migrant birds until it was discovered that every week a lorry load of partly processed turkey meat arrived at the Bernard Matthews plant from Hungary (where there had been 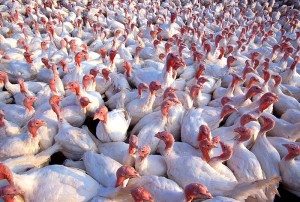 recent outbreaks of Poultry Flu).  And in 2001, the Foot and Mouth outbreak revealed to us all the scale of live animal transfers the length and breadth of the country (faster and further than the most adventurous badger can travel).  So when things go wrong with diseases, the food chain or food safety we discover that domestic animals and their processed bits are travelling widely with all that entails.

If the meat in your lasagne comes from (or passes through) Romania, and your turkey twizzlers come from (or spend some time in) Hungary, then this is partly because both countries are part of an extended European Union – and a part of the EU where wages are lower than here.  Our food prices are partly achieved because we are tapping into cheaper production systems elsewhere in the EU. And we might well say ‘Great!’ although we are also likely to want the standards, particularly the safety standards, to be just as good as they are (or we imagine they are) in the UK.  And that’s why we are all subject to EU regulations – it’s to set a level playing field for businesses in Bucharest and Birmingham.

Let’s all remember that we want the Romanians and Hungarians, and Irish and British, to implement food safety regulations completely and properly, because our food comes from all those countries these days, the next time George Osborne moans about EU regulation.  And the same goes for the environmental legislation too.  We don’t want Romanian or Hungarian businesses to be able to trash the environment partly because we don’t want them to play by different rules from our own businesses, partly because wildlife (particularly birds, of course) move between EU countries and partly because we care about the Romanian environment even if slightly less that we care about our own.

While Owen Paterson has been keen to engage with Europol on horse meat he has been less keen to tell us all about the outcome of the CAP negotiations – which I still find completely bizarre.  As we, as taxpayers, are net contributors to the EU budget, not only do the CAP outcomes influence our own countryside but we are also paying for their consequences across the EU.  I’m paying (a tiny bit) for the impacts of CAP on the Romanian and Hungarian countryside too.

Although not a crisis (yet?) the horse meat scandal does raise the possibility that veterinary drugs may enter the human food chain.  Bute is the drug used on horses which is the main worry here.  Most people will not have heard of bute until the last few days but those, like me, with an interest in horse racing will have done as different countries have different rules about whether racehorses can compete if they have traces of bute in their systems.  If any horse who wins a race at the Cheltenham Festival in three weeks time is found with any bute in its bloodstream then it will be disqualified – so look out Sprinter Sacre, Hurricane Fly and Oscar Whisky.

There is good news on another veterinary drug story. An alternative to bute is diclofenac.  Both bute and diclofenac are non-steroidal anti-inflammatory drugs (diclofenac is still used for humans (you may be taking it now) and bute used to be).  Diclofenac was widely used in the Indian sub-continent as a painkiller for cattle until it was discovered that it was killing vultures.  Because of the role of cattle in the Hindu religion most cattle carcasses were cleaned up by vultures and the Asian white-backed vulture was abundant.  Although diclofenac had been tested in the normal way, its impact on vultures is extreme.  Potentially, one meal from a diclofenac-treated carcasse will kill an adult vulture, and millions and millions of vultures disappeared from Asian skies because of diclofenac.

Thanks to research and advocacy by a range of organisations the veterinary use of diclofenac has been much reduced in India, Nepal and Pakistan and the outcome of that is that vulture populations are making a slow recovery.  It’s a long and fascinating story (see here) but it is beginning to look as though it might have a happy ending.

So you wonder whether the fact that neo-nicotinoids have been tested is really as reassuring as we are sometimes told (see here and here)? I’m not sure, but again if we had an EU-wide response it would help.

The world is an interconnected place – and that is part of its fascination.