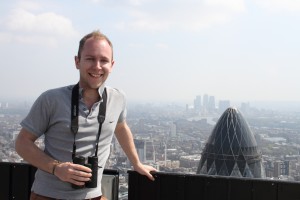 Matt Williams is a conservationist and photographer. He is spending 2013-14 working in Indonesian Borneo for the Orangutan Tropical Peatland Project. Matt is also an ambassador for the A Focus on Nature project, and a freelance writer for the Good Men Project and The Ecologist online. Starting his conservation career early, he has been a member of the RSPBsince the age of five. Follow him @mattadamw and find more of his work at mattadamwilliams.co.uk.

Whether you vote or not, go birdwatching

In the recent spat between Russell Brand and Robert Webb about politics, voting and revolution, one key element seems to have been forgotten. What role is there for birdwatching?

By this I partly mean, will the post-revolution, empowered and engaged citizenry of tomorrow, who have thrown off the manacles of their fawning political overlords (never anything more than branded and packeted corporate puppets), still find the time to take up binoculars and dabble in a spot of twitching, in between collectivising local vegetable production and setting up new councils to manage the equitable redistribution of revenues from comedy shows?

But mostly I mean that birdwatching, that most understated and seemingly conservative of pastimes, is a deeply political act. I will argue this for three reasons.

First, in conversation a couple of years ago with a friend (who while interested in the environment frankly couldn’t tell her arctic tern from her albino robin) we came to a profound conclusion: birds are the ultimate anarchists.

As a very young child, I remember sitting on the end of my bed, looking out the window with my father, seeing a huge bird flying away. I was told that this was a heron. My mind boggled. As a four year old my entire life was, in a sense, decided for me. I was got up, washed, dressed, fed, read stories and put to bed by other, larger people. This huge bird, on the other hand, could fly around without a single person telling it where to go and when to do so. This is perhaps why birds have, in so many cases, become symbols of freedom.

They are also ubiquitous: if I ask you to go outside and show me the first living creature you can find, chances are the easiest thing to do is to look up and show me a bird.

No politician, corporation or individual tells a bird when and where to fly. Their freedom is, symbolically at least, absolute and inspirational. While this is perhaps an inaccurate way to think of human existence, it does at least offer some motivation to take advantage of the opportunities we do have, even if for many these are restricted by outside factors.

The second and third reasons why birdwatching strikes me as deeply political are two sides of the same coin. Let us begin by considering it as escapism. Now, I am always watching for birds, from the moment I wake to the moment I sleep. I even dream of birds more frequently than is probably healthy but that’s a story for a therapist one day.

But to truly go ‘birdwatching’ involves leaving urban settings behind, or at least seeking out their greener corners. It means recognising the artificiality of our towns and cities and getting back to something to which people are more fundamentally connected: nature.

This counter-cultural act, spending time in the natural world, is both a geographical move and also one that involves an internal, spiritual change. While we wait, watch and listen, we can take in the tranquility, calm and sense of connection that come from surrounding ourselves with the life that surges up from the Earth beneath our feet. This provides time to realise that beyond the fast-paced, 24-hour culture of everyday life there is something slower, softer and in a sense apolitical.

Finally, birdwatching is also deeply political for the exact opposite reason: it draws us into the politics of the day. By going birdwatching unashamed of the stigma or stereotypes that are attached (anoraks, moustaches, long telescopes, many of which are giant sandcastles of fallacies built on a minuscule grain of truth), each of us is, silently, saying something important:

We value the natural world. Our existence would be diminished, the edges of our world imperceptibly and yet undeniably shrunk inwards by damage to nature. For example, if the purr of the fast-disappearing turtle dove ceases to grace the UK’s shores, I will, for perhaps more than a moment, pause to mourn.

Economies may demand endless growth, politicians may decry the legislation which protects our green spaces at the expense of development, but there’s something wrong with that. In birdwatching is something that nature provides for free, that we love and cherish and want to see protected. Take your rainforest-devouring over-consumption, your climate-warping fossil fuels, your intensive, chemical-rich, unsustainable, subsidy-dependent farming and find better ways to do things that don’t threaten nature and its creatures.

Indeed, the late nineteenth century origins of the UK’s Royal Society for the Protection for Birds are in the political acts of the women who rose up against the fashion industry’s unsustainable reliance on feathers. The US Audubon Society fought the same cause on the other side of the Atlantic in the early 20th century. To this day such organisations’ stock in trade is being the fly in the ointment for Governments and businesses that think they can ride roughshod over the natural environment.

Birdwatchers are part of an esteemed political history. Every time we take up binoculars we are making a political statement. So whether you side with Robert Webb or with Russell Brand, whether you choose to vote or not, go birdwatching.