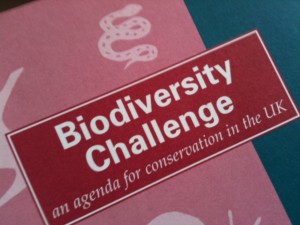 If you look at the composition of the group of six organisations (Butterfly Conservation, Friends of the Earth, Plantlife, RSPB,  the Wildlife Trusts and WWF-UK) who published Biodiversity Challenge 20 years ago there are some interesting (I think) reflections for the future.

How likely is it that these six organisations would work together on such a report these days? Not very!  WWF-UK has turned its back on UK nature and decided that the international scene is where it can make the biggest difference – they may be right,  but, very clearly, their absence weakens the UK conservation scene.  FoE left wildlife behind but are gradually rediscovering it through bees and neonicotinoids, but their wildlife credentials (despite the excellent Guest Blog here by their Chief Exec, Andy Atkins) are a bit flimsy.

RSPB, Plantlife and Butterfly Conservation have worked together well ever since Biodiversity Challenge.  There are signs that the RSPB and the Wildlife Trusts are working a bit more closely together (which is good) as evidenced by the well-supported e-action on CAP reform over the weekend.

The National Trust didn’t endorse Biodiversity Challenge and hardly ever endorses any joint conservation action these days, so nothing has changed there.

The Grasslands Trust has come and gone and Buglife and the Bumblebee Conservation Trust have come. There are more nature conservation organisations than ever, but are they working together well enough?

In my experience, it is when nature conservation is on a ‘war footing’ that the disparate organisations work best together.  When nature faces a big threat or there is a big legislative opportunity then differences are dropped and joint working, often very good and exhilarating joint working, emerges.  And the wildlife NGOs work least well when it seem to be business as usual or when there is money up for grabs.

The Biodiversity Challenge time was a time of opportunity which some organisations spotted and exploited.  Government actually seemed keen to do something on nature conservation, was committed to doing something, but needed some help in deciding what that ‘something’ was.

The CROW Bill, GM crops, the plans for new airports for London, the Marine Bill and Climate and Energy Bill provided similar opportunities in the term of the last Labour government.  And NGOs did pretty well, I would say.  In this government’s three and a half years there have been no positive legislative opportunities to rally behind and the threats have been meddling with forestry, meddling with the planning system and bumping off badgers.   It’s difficult to give the NGO community top marks on any of these – and, I think, more difficult to discern great examples of a joined up approach.

It doesn’t help, as I wrote in my blog for Green Alliance this week, that nature slips away gradually, year by year, and bit by bit, from our lives.  If all the farmland birds that have disappeared from the countryside had gone in a single year then there would be uproar, or if all the Skylarks disappeared one year, all the Grey Partridges disappeared a few years later, then again there would be uproar.  But because there is less of everything in each successive year it doesn’t look like a crisis until you look back over a couple of decades and go ‘Ooops! – where has all the wildlife gone?’.

The State of Nature report was good in parts, but it wasn’t an agenda for action and wildlife losses are hardly news any more.

NGOs have become used to being listened too, and used to seeing themselves as partners with government – ‘constructive friendly critics’ is the phrase often used (by government and NGOs).  What, constructive, is there to say about biodiversity off-setting, attacking the planning system, talking of the environment as a block to the economy, cutting the budgets of the statutory agencies and not delivering even on the things that you said you would do?  It’s a different world from the one of the last few years.

The lack of money in the economy doesn’t help.  And the lack of a vibrant political alternative doesn’t help either. After most conversations about how awful the government is, the final shot is ‘I’m not sure Labour would be much better’.

My political advice, for what it’s worth (not very much really, I guess) is that the wildlife NGOs should decide that the Conservatives are not going to be in power after the next general election and therefore write them off for a few years.  Put your efforts into getting Labour to deliver something half-decent rather than thinking that the Tories can be talked around.  What’s the worst that can happen – that the Tories get in again and don’t listen to wildlife NGOs?  Well, that’s where you are at the moment too.  How bad does it have to get before the NGOs are seen to say so?

And the advantage of leaving a few stud-marks on the shins of the outgoing government is that it reminds the incoming one that you are wearing boots.  If NGOs take the type of hopeless agenda that is being offered by this government, and take it lying down, then the next government will think it can get away with only doing a little bit better.

Also, the danger that the NGOs face with their public is that they are not seen to be standing up for nature – they seem to many (many who talk to me at least) to be lying down and hiding rather than standing up.  Who would you rather impress – your public or the government of the day?  Which is it, in the end, that pays the bills?

‘Challenge’ seems to have gone out of fashion  a little. When the government is sympathetic you can challenge them to do better; when they are as poor as this one then you must challenge them to change their ways.  There’s no need to be rude, or strident, but you need to show everyone, your supporters, your opponents and every other audience, that you stand for something.  Stand up, and speak up for nature.

5 Replies to “Biodiversity Challenge 3 – the future”