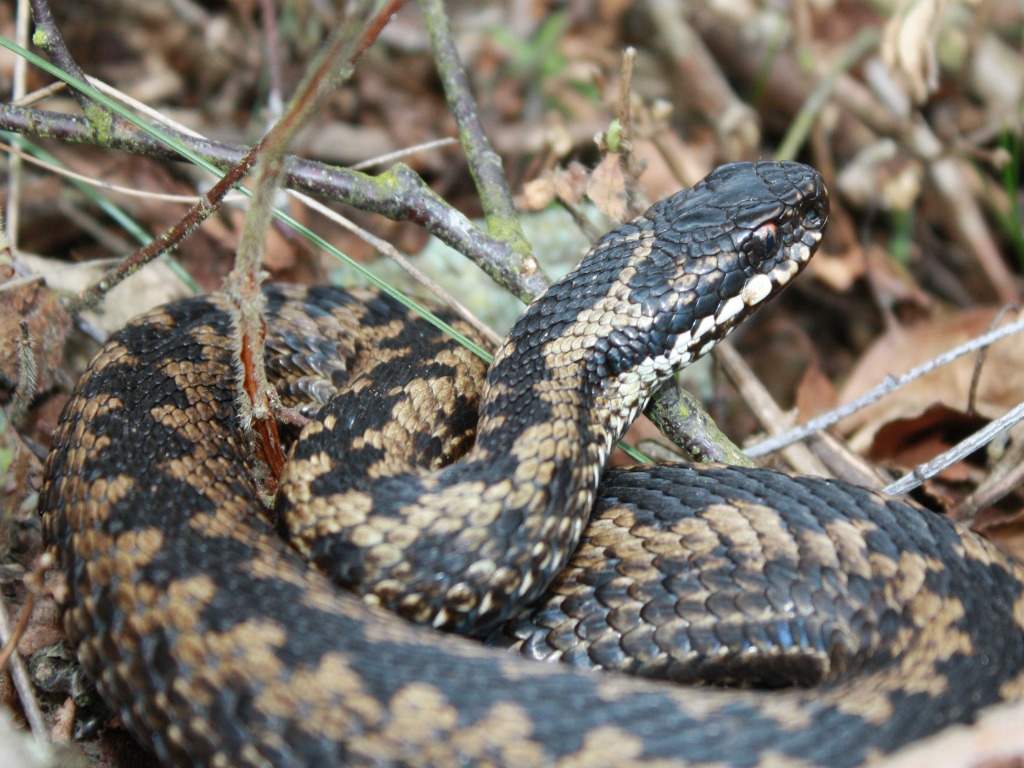 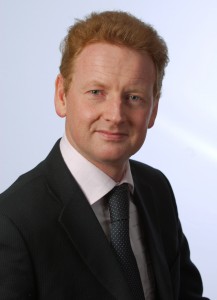 Nicholas Milton has worked for the BBC Natural History Unit, the RSPB, the Wildlife Trusts, Greenpeace and the Ramblers. He is a freelance journalist and writes about the environment, politics and the Second World War. He is also a marketing and communications consultant and is currently working with the international development charity Practical Action.

Last month I wrote a comment piece for the Guardian on whether we can save the adder from extinction in middle England.  My argument was that the decline of the adder was due to many reasons including habitat destruction, persecution, inbreeding and the killing of young adders by pheasants but what was pushing the species over the edge was the spread of the buzzard. The article caused quite a storm.

It was not an easy article to write as I am a big fan of both species. My first job in conservation was working with Mark in the RSPB research department back in the early 1990s. Back then the buzzard was quite rare in middle England and its spread after decades of persecution is a great conservation success story. I still get a kick from seeing a buzzard while driving along in my home county of Warwickshire and my wife is forever telling me off for craning my neck to see one when I should be concentrating on the road.

Ironically it was also at the RSPB research department that I learnt about adders. As a young researcher working on the decline of farmland birds I had pinned up an adder skin above my desk. One day out of the blue I was asked to report to the RSPBs Director General, Ian Prestt. Not as bright as Mark and without a published paper to my name I was convinced I was going to be sacked. Instead to my surprise Ian asked me where I had got the adder skin. It turned out that Ian’s PhD had been on the adder and he asked if I would like to go and see a colony with him. Over the next year we went to see adders on many occasions, including memorably with the late Derek Ratcliffe.

Ian’s boundless enthusiasm and knowledge triggered in me the start of a lifelong love affair with Britain’s only poisonous snake. Since then I have continued to monitor adders at two colonies, one in Greater London where I used to live and one at a nature reserve in Oxfordshire (sadly one of the nearest sites to my home in Warwickshire where they went extinct many years ago). Both have always supported small populations of no more than 10-20 snakes. However, this year there has been a catastrophic decline and there are now no more than 3-4 snakes present at each. 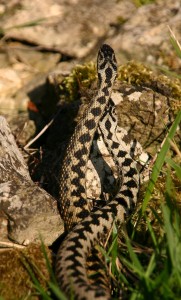 In the case of the Greater London site I put the decline down to the very wet winter and disturbance, it being a small water meadow near a public path. However, in the case of the reserve in Oxfordshire the decline is harder to explain as the site was unaffected by the floods and the warden has gone to great effort to create the right habitat for the species.

One evening after a visit when I had failed to find any snakes, I got into a long conversation with him about why the adder had disappeared from the reserve over the last few years. The site is located in the centre of red kite country in the Cotswolds and is patrolled almost constantly by both kites and buzzards. On a previous visit I had seen a buzzard with a snake in its claws and although I couldn’t tell the species, I strongly suspected it was an adder.

The warden told me that despite the presence of the kites, he also thought that it was the buzzard that had killed most of the adders. Apparently although mainly a scavenger, the buzzard is an intelligent bird and if it finds a snake will go back time and again looking for more. Given how vulnerable adders are when first emerging from hibernation and how common the buzzard has now become, we both concluded that it was the most likely cause for the disappearance of the adder from the reserve.

Of course implicating the buzzard in the decline of a species like the adder is manna from heaven for those gamekeepers and landowners would like to see buzzards taken off the protected list and culled. In the past few years under this government the buzzard has become the cause celebre when it comes to trying to reintroduce the control of birds of prey. That was why I was very careful in the article to state that for high profile shooting journalists like Patrick Laurie they have become a convenient excuse rather than a conservation cause. I also stated that as well as the buzzard we urgently needed research into the impact of pheasants killing young adders.
When I published the article I predictably got roundly attacked by conservationists but less predictably found myself in the deeply uncomfortable position of being supported by the shooting lobby. Many of the most vitriolic comments posted on the Guardian and sent to me via Twitter were understandably from people who wanted to protect the buzzard. In contrast Lucy King, the news editor of Shooting Times, stated on Twitter “such a pleasure to read such a calm and reasonably put piece” (although I’m still not sure if she was being sarcastic) while Patrick Laurie penned a memorable blog about me entitled The Evil Gamekeeper. In this he railed against the fact I had described him as a gamekeeper, not a journalist but somewhat gave the game away when he stated “my response to seeing adders killed by buzzards…..is to ask if the life of every single buzzard in Britain is individually more important than the survival of an entire species”.

Given the extent to which we have destroyed the natural world, perhaps we should not be surprised that these conservation conflicts are likely to be used politically by those with a different agenda. I often think what the late Ian Prestt would have made of the controversy. Sadly what I didn’t know at the time of our visits was that he was dying and he passed away not long after I left the RSPB (I attended his memorial service at St Pauls Cathedral and took along an adder skin as a mark of respect). I strongly believe that despite his deep love of birds and his position as the Director General of the RSPB he would have supported a rationale debate about the role of buzzards in the decline of adder.

22 Replies to “Guest Blog – Adders and Buzzards by Nicholas Milton”