Number 1: I spent five minutes in the garden, looking at my ‘meadow’ and ended up looking at a Meadow Brown (so it must be a meadow, mustn’t it?). Aren’t butterflies lovely? But wouldn’t they look quite ugly if they didn’t have such amazing wings? Have you ever looked at a butterfly’s face and body?  Yuk!  Not the greatest beauties in the world, really, are they? It’s amazing what some large colourful wings can do for your image. Maybe I should try some.

Number 2: yesterday, I drove past a house in a village nearby and just had to stop to look at the butterflies in the lavender border. They were bouncing around in the air and I stopped to watch them for about 10 minutes. There were some Meadow Browns and a single Large Skipper but also c30 Small Tortoiseshells too.  That number of Small Torts would have been commonplace only a decade ago but is now unusual enough for me to stop and enjoy it.

And how about this? I was so pleased to see the butterflies, I wrote a little note on the back of a business card and popped it through the letterbox of the house. Imagine my surprise when this morning I got an email from the householder saying that she was pleased that I’d enjoyed the butterflies and saying that she knew who I was as her daughter had also once worked for the RSPB. What are the chances  of that, do you think? (my guess would be  it’s a 1 in 30,000 chance – rationale at end of this post, below the photograph).

Number 3: on the former airfield, where I look for migrant Wheatears in spring, there is a lot of grassland and I’ve been meaning to see whether there are any grassland butterflies there.  After my instant success described in the next ‘butterfly moment’ I felt I had the time, so I went for a stroll and saw several Marbled Whites and a Small Heath.  Marbled Whites about 2 miles from my house and I’d never realised. What else is there so close and as yet undiscovered? And what is on your doorstep which you might find if you go out and look?

Number 4: early July is Purple Emperor time in nearby Fermyn Woods. I almost always make it there at this time and I almost always see this most spectacular butterfly. It’s a local treat – and I deserve it!  Here’s an account from three years ago.

When I arrived (and I was only able to do so as a workman had let me down for the second week running in turning up) there were 21 cars parked at the entrance to the wood and as I walked down the ride between tall trees i could see four blokes with cameras lying on the track and all looking at the same spot.  This was very promising – but it might be a White Admiral rather than a Purple Emperor.

It was a Purple Emperor and I can prove it because it’s in the photo below – although so is a large amount of a Welshman too. 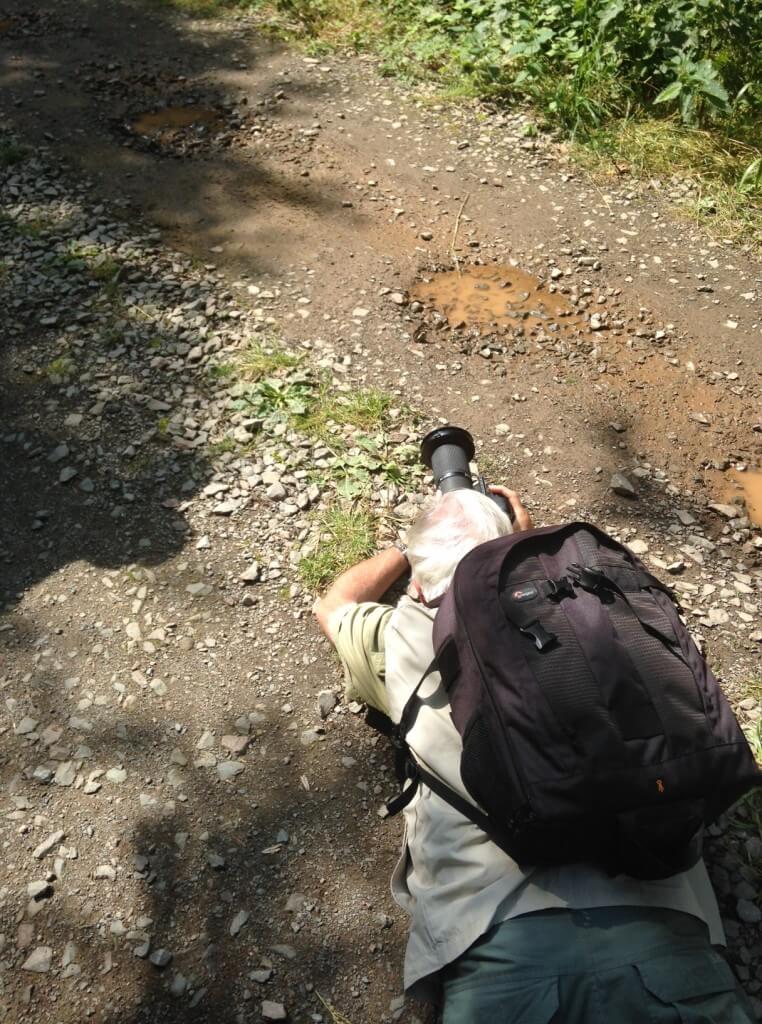 And that probability? There are about 60million people in the country.  Let’s guess they live in c30million households (actually, I checked – I was pretty close). While I worked at the RSPB, for 25 years, there must have been c6000 different employees? Maybe more? Let’s say 10,000.  Does that mean that if I had put my business card through a random letterbox that there would be around a 1 in 3000 chance that someone there had a reasonably close relative who worked for the RSPB? Roughly?  But what are the chances they would know who I was, and also bother to reply? One in 10, perhaps? So does that make it, very roughly, a one in 30,000 chance? That’s higher than I would have guessed but I may have ‘guestimated’ it wrongly. Still – it passed a couple of minutes and got my brain working. What do you think?