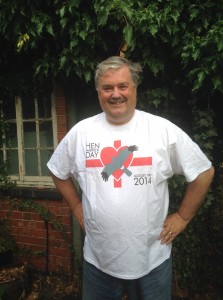 Thank you for your response to my open letter and it was good to see you briefly at the Bird Fair on Friday – wasn’t it fun!?

And congratulations on the Skydancer project winning the Heritage Lottery Award vote in the education category.  Very good news and an indication of the high level of support for this amazing bird (and, of course, for the RSPB).

I was glad to see that you agree with me that the RSPB is not constrained by its Royal Charter or Charitable Objects over calling for a ban on driven grouse shooting – it is just that, at present, the RSPB has decided that a licensing system is the way forward.  I can understand that.

Your reply does leave a large grey pachyderm in the room though. If RSPB Council decided 18 months ago on licensing being a good way forward why did the RSPB not give a big push to John Armitage’s e-petition on this very subject which must have been active for at least 11 of those 18 months? You must admit, it’s a bit difficult to fathom, Steve.

However, I can see that there is a fair chance of getting grouse moor licensing in Scotland and the RSPB may not want to jeopardise that, at the moment, by taking a further step down the path that will inevitably lead to a ban on driven grouse shooting.

Having pinned your colours to the ‘licensing’ mast I assume that this is yet another reason why, rightly, the RSPB cannot sign up to the shooting industry’s ‘joint’ ‘plan’ ‘for’ the Hen Harrier.  Since the RSPB believes that licensing is needed then it can hardly sign up to a Hen Harrier plan that does not include that commitment in it.

I don’t think that licensing will work for a variety of reasons, but I’ll leave it until later in the week to set them out more fully.

May I also add here (I checked with Mike Clarke over the weekend) that I know that the RSPB has had a few letters etc asking why the last issue of Nature’s Home magazine did not include an article on Hen Harriers or Hen Harrier Day (but did include an appeal for money for Hen Harrier work). I know that the lead-in time for the magazine is a long one and Mike said it was OK for me to say here that the next issue will include an account of the conflict between grouse shooting and Hen Harrier conservation and will include a few words from myself in favour of a ban to driven grouse shooting (and a link to the e-petition) and a few words from the Moorland Association saying whatever they have to say about the matter. I’ll look forward to seeing that.

I wonder how many signatures the e-petition to ban driven grouse shooting will have gathered by the time that Nature’s Home addresses this issue?  At present it is at 15,200 in under three months which is 5000 more than the e-petition in favour of licensing gathered in a full year.

Thank you again for responding, and you can rely on my constructive support, with a bit of friendly, well-meant, constructive criticism thrown in now and again too.