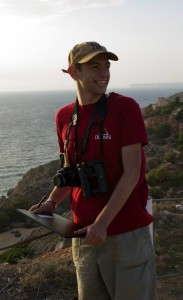 Oliver Simms has recently graduated from Durham University with a Classics degree and is about to start work as an accountant at the National Audit Office. He is a keen birder, hill walker and passionate conservationist, who has volunteered extensively including at Raptor Camp in Malta. He has served as Trip and Partnerships Officer for Next Generation Birders for the past year but is standing down next week due to his new job.

Back in April, Danny Heptinstall wrote a thought-provoking piece on this blog calling for a “youth conservation movement”. Anyone present at Birdfair, who would have seen over 100 Next Generation Birders and A Focus on Nature members present, would agree that we now have one. As I sat with fellow members of this “youth conservation movement” in a pub in Oakham on the Saturday night of the fair, conversation turned to the barriers facing young people in conservation. The usual answers like the lack of environmental education in schools or the desire of young people to get rich were brought up but what I feel is one of the most significant barriers to young people pursuing a career in conservation was largely ignored until I brought it up.

I have become increasingly concerned that the requirement of the majority of entry level conservation jobs for applicants to have at least a year’s unpaid volunteering experience is a significant barrier to young people from poorer backgrounds. The placements offered by large charitable organisations like the RSPB and National Trust are great but participants either depend on the support of their parents or have saved up enough money to fund their living costs during the placement. With the increasingly crippling costs of living, an increasing number of young people, particularly those struggling with university debts, are not in this position. As competition for jobs in conservation is so great, these placements are effectively a prerequisite but, in my opinion, the question now has to be asked whether having this experience is really a test of passion for conservation or the wealth of someone’s parents.

I decided against pursuing a career in conservation at this stage but this post is not about people like me. I am very fortunate that my parents could have supported me through an unpaid placement but I know many cases of people who have turned the back on a conservation career simply because they could not afford it. I also know of an individual who was forced to give up a placement with a large charity due to financial issues, despite loving his work. Thankfully he has not given up his dream of working in conservation but many would in his situation.

The two solutions often suggested are that young people from poorer backgrounds doing placements can even find part time work or sign on. For some, these may be an option but not in the majority of cases. Many understandably do not wish to claim benefits and the law is very ambiguous over whether this is permitted during such long placements, while finding part time work is often impossible for people at the more remote reserves or those without good evening public transport connections. I posted my thoughts on this issue on the A Focus on Nature Facebook page and a couple of people posted examples of paid placements open to those without substantial experience. I urge anyone considering a career in conservation to have a look but they were noticeably limited in number. More surely needs to be done.

In an ideal world, all these placements would be paid but I appreciate funding is tight for conservation charities. My solution would be a bursary scheme to fund minimum wage 6 month or year long placements for those from the poorest backgrounds. I would like these to work in such a way that young people apply for the same unpaid placements as those from richer backgrounds and then the bursary is awarded after the application is successful. How exactly this would work requires fine tuning but it is essential that the funded placements do not soon become like other entry level conservation jobs and require a mountain of experience.

The benefits of my proposal are obvious for young people looking to get in to conservation but what are the benefits for charities when there is so much pressure on funds and there are multiple applicants for each unpaid position? The first is simple – passionate young people, who could make a great contribution to the work of these charities, are not prevented from working for them by financial constraints. The second though is even more important. Making conservation careers accessible to people from all backgrounds is surely going to make it less of a middle-class elite issue and bring it in to the mainstream. A passionate employee of a conservation charity is surely going to spread the word of campaigns and issues to friends and family. I know this is optimistic but my proposed bursary scheme could be the first step in moving issues like Hen Harrier persecution, so important to readers of this blog, in to the eye of most the public.

For the reasons I have outlined above, I am now calling on charities, such as the RSPB and National Trust, to set up this bursary scheme and on the youth conservation movement to lobby to make it happen.

If anyone wants to discuss the issues with me, comment below or e-mail oliver@cornwood.co.uk