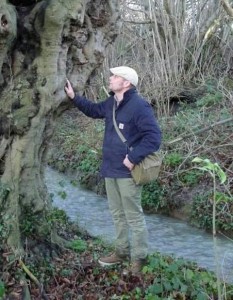 Pip Howard is a British forester who lives and works in France. He worked with Save Our Woods and now at Forestcomms working on the pan European landscape research project HERCULES.

All discussion on the environment will at some point, quite rightly, centre on education. We not only have to do something about the way we treat the environment, but we have to educate our children with regards environmental issues.

I grew up in the UK and remember Newsround, Blue Peter and other children’s TV shows were not afraid to tackle important humanitarian and environmental issues. Returning to the UK for a brief spell this summer I was dismayed to watch an episode of Newsround, which my son had on and despite the huge amount of worldwide news available it choose to centrepiece on celebrities, who or what they were doing I forget, I forgot very easily.

So one might assume that we can hope that the plethora of NGOs that abound in the English-speaking world would at least be doing something? I hear lots of talk of initiatives and projects centred on children ‘reconnecting’ them to the outdoors and thus to the environment. But then I visited a local toyshop, in Totnes, Devon. There was a small display of ‘bugs’ embedded in a plastic rectangle.  On closer inspection these bugs were real; scorpions, tarantulas and other species you may not want to find in your wellies, but which are still a vital element in a habitat somewhere in the world. A sticker had been placed on the front of the display, which read: “Due to some concerns raised we wish to inform our customers that we have investigated the source and can confirm that they come from an ethical source”

Really?! What the heck is ethical about this?

Then today my son pointed out a TV advert on one of the children’s channels. It was for a magazine, where the ‘free gift’ was one of these embedded ‘bugs’. A quick look online and sure enough neither of us were dreaming this.

An Orwellian nightmare; taking the extreme of Victorian collections into a modern context the UK are happy to sell a children’s magazine which gives away free mass-produced blocks of plastic with once-living creatures inside! And the worst thing about this – it is apparently accepted by both National Geographic and the National History Museum!

Combined with the current Coalition stance on the environment, which seemingly does little more than attract an ‘eyes to heaven’ look by most nature conservation NGOs, one cannot hold out much hope for the UK in environmental issues.

Perhaps, as a French colleague said to me recently, this is not such a bad thing, as a worse case scenario in operation is always useful in scientific research and the British Isles are thankfully relatively small. So it is probably best to cross my fingers in hope that the UK leave the EU and therefore all discussion and debate with regards the environment and indeed all land issues.