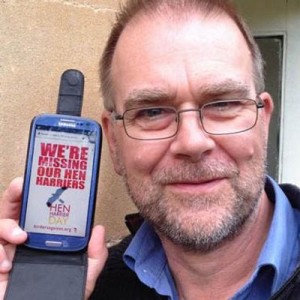 A little over two years ago I interviewed a certain Dr Mark Avery for a podcast.

Mark had prepared a list of ’10 things we can all do to become activists’, and it had some inspiring sentences written into it. Perhaps not ‘Ask not what your country can do for you‘ inspiring, but practical, sensible, achievable suggestions that resonated with at least one member of the audience (me). He didn’t actually say, ‘Develop a campaign group that will consume your every waking hour as you start to appreciate just how little you know’, but the seed was planted.

So when one rain-lashed crow-black evening I could still hear guns pummeling the local Wood Pigeons and wondered how they could possibly be certain they weren’t shooting Stock Doves and what the law might have to say about that, Mark’s words came back to me.

I had a thought that if I and close colleagues didn’t know the law, probably many other birders/countryside users wouldn’t know it either. And we should, because laws are there to protect our wildlife and to stop criminals from harming it.

A few (long) phone-calls and much writing/deleting/rewriting later, a new team and a new campaign group was born.

Yes, if you’re one of those people that don’t like Birders Against Wildlife Crime (BAWC) you can add that to your very own list of ’10 things that p*ss me off about Mark Avery’…

Having said that, what’s not to like about BAWC (or the genial grand-provocateur Mark Avery come to that)? We’re really a rather nice bunch. Passionate, committed, just doing what we can to raise awareness of the illegal persecution and unlawful coursing, trapping, shooting, and destruction of protected wildlife.

Which is a good thing, right?

Though I guess if committing wildlife crime is your bag, and you’d rather a poorly-informed British public remains in the dark when it comes to Recognising, Recording, or Reporting wildlife crime, then we might be – how can I put this, an irritant perhaps. If you’re someone with a vested interest in keeping Hen Harrier numbers in England artificially (and criminally) low you may not like us for initiating Hen Harrier Day (and I suppose especially dislike Mark for taking the idea into the heart of the moorlands). Perhaps if you’re someone who doesn’t want us to set up and run our ‘Eyes in the Field’ wildlife crime conferences (the first is in March next year) where we aim to really inspire people to get involved with tackling wildlife crime then there’d be a reason to want to stuff us down a fox hole or to hope we’ll just disappear into thin air like harriers and their satellite-tags.

The truth is that wildlife crime is a festering sore. It reeks of disrespect and a lack of imagination. It’s a primitive response to modern problems, and its stench has been tolerated for far too long.

Like any severe infection it won’t be beaten with kind words and a spoonful of sugar. It needs to be attacked hard, and we can all be a part of the cure. We public don’t even need much in the way of specialist training. BAWC is already building an information hub to help. Many of us are out in the field anyway; we have the optics; we have camera phones; we have nothing to fear because the law is on our side.

At this point perhaps I should ask you to join BAWC.

While we do have a Donate page if you feel like supporting us, we don’t have members so there’s no pitch coming. Everything on our website is free to access and always will be. You can subscribe to a monthly newsletter if you’d like to, but that won’t cost you anything either. And if you do follow us we won’t bleat about how unfair things are and ask you to pay us because we’re the only people who really ‘gets’ the ways of the countryside. And we certainly won’t be trying to convince you that it’s the ‘Sparrowhawk what done it guv‘ or that killing things is the only conservation worth funding.

No, we’ll just try and help us all to tackle wildlife crime. Doing what we can to support charity investigation officers and the police. Meeting people, developing partnerships and initiatives like the one that has led to the recently-launched ‘Wildlife Crime Aware‘. Oh, and coming up with Star Trek-based t-shirt slogans like, ‘We are BAWC, resistance is futile‘. Because we wouldn’t want anyone to think that BAWC doesn’t have a playful side.

Anyone except – well, you know who you are. And where you’re concerned we are never anything but serious.