Today is a cold day. Is it cold where you are?

I have been snug and warm, and productive, writing away in my office since soon after 0600 this morning. I already feel that it has been a successful and productive day and yet there is lots more of it to come (and go).

I have only taken a break to help jump-start my daughter’s and son-in-law’s car – reminding me of the cars I had at a similar age, and how one spent as much time getting them started, repaired, serviced and mended as one did driving them (or so it seemed).

Venturing out with the jump-leads, the road underfoot was icy and although the sky is bright blue, and the sun is out, it is cold. Cold, cold, cold! Their car is now at the local garage and my inexpert prediction is that a new battery will solve all their problems except financial ones. 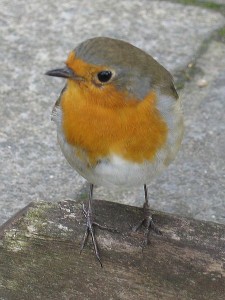 As we left the garage we stopped to watch a male Blackbird and a Robin feeding in some leaf litter. It seemed that they were feeding together but that may not have been the case. The Blackbird was the leader, tossing aside leaves, other vegetable matter and the occasional small stone to search in the dark mulch. Where it had been there were patches of dark disturbed leaf mould, where it was still to go was a more uniform, white, frosted, potential feeding area.

The Robin pecked in the dark, upturned leaf matter – it seemed quite successfully. Several pecks in the same small area each seemed to be finding tiny food items. The Robin was very close to us, only a few feet away. It obviously knew we were there and i guess it kept an eye, a dark beautiful eye, on us as it fed.

It really did seem as though it was benefitting from the work of the more active Blackbird in turning over the leaves to reveal places where the Robin could feed.

Once home, around noon, I looked down the east-west (and west-east) running road that stretches away as I look from the bedroom. Almost all the road was in shadow and was still frosty and icy.  At the top of the road nearest me, there was a portion of clear road, wet not frosty, which I realised had been exposed to the sun earlier in the day.  The movement of the sun had cast it back into shadow, but the earlier sun had melted the ice crystals.

Further down the road, the only areas free of ice were the places where cars had been parked overnight, the wide gap where a house has been knocked down and a new building is going up but at present lets the sun shine onto the icy road, and a thin gap between two houses where the midday sun had cut through and left a strip of black wet tarmac across an otherwise white frosty road.

It’s cold. Is it cold where you are?