Skip to content
I didn’t expect to get an email like this one – how wonderful!
Dear Mark, 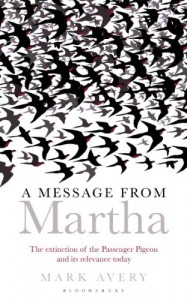 First off I hope you don’t mind a stranger contacting you out of the blue. I’d like to tell you how much I enjoyed my now well-worn copy of A Message From Martha. It was not only an astonishingly well researched work of naturalist writing, but a singular and beautiful read too. It gave me the privilege of telling several people interested in the cover that it was about an extinct species of American pigeon, with invariably interesting results.
I’m a playwright based in Leeds and I have just finished a play about Martha that was initially going to be pitched as part of a WWI season in London. I was asked to come up with a story about WWI that wasn’t men in the trenches or Colonel Melchett. In researching alternative WWI stories I came across the story of the last passenger pigeon dying in Cincinatti Zoo whilst miles away the Great War was just getting started – and the parallels between mass extinction and huge losses of life in the coming war struck me deeply. The story led me to lots of sources of information which aided me writing the play, the most helpful being your book.

It’s been a long road with the play since then: it’s gone from being a three actor piece to a cast of twenty, and from being grimly bleak to slightly absurd. Finally, it is going to be performed, from the 25th to the 28th of November this year at the Ilkley Playhouse by a cast of young actors.

It’s a play that is set everywhere from Cincinatti Zoo to Marnes, it features characters called Audubon, Schorger and Avery (though I should say while ‘Avery’ is interested in birds, he is not at all intended as a representation of yourself – I just can’t be the first person to be entertained by the punning aptness of your surname!) and human and animal viewpoints alike.
I would be thrilled if you would be able to come and see it, and will secure tickets for you if so, but more importantly I wanted to extend my sincere gratitude for your wonderful book, which was always there when I needed to check the dimensions or speed of a flock of passenger pigeons, or when the name ‘Buttons’ escaped me, or when I wanted to re-read certain phrases like ‘the human froth’, ‘a personal extinction’ and Leopold’s ‘On A Monument to the Pigeon’, all of which were a constant spark, and thanks to you, within hands reach.
Yours gratefully,
Ash Caton
Likes